Here’s a quick rundown of what happened in Loudoun County, Virginia…

On May 28, the 15-year-old daughter of the father in question, Scott Smith, says she was brutally raped and sodomized in a Stone Bridge High School girls’ bathroom by a boy who gained entry by wearing a skirt and identifying as “gender fluid.”

The suspect was not arrested until late July or early August, as Breitbart News reported.

Apparently, after the incident, the school system simply transferred him to another school because on October 6, this same boy was charged with forcing a girl into an empty classroom and touching her inappropriately at Broad Run High School in Ashburn, Virginia.

However, just a few weeks after the May 28 rape allegation, the Loudoun County School Board held a meeting to advance a policy that would allow biological males to use the girls’ bathrooms and locker rooms. 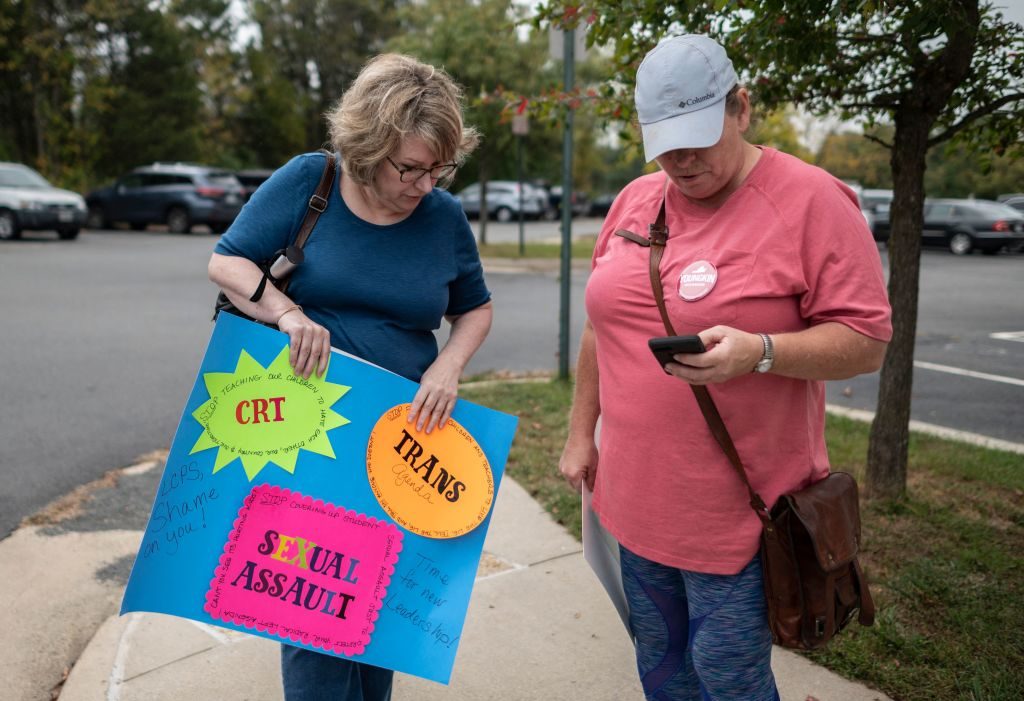 Protesters and activists stand outside a Loudoun County Public Schools (LCPS) board meeting in Ashburn, Virginia on October 12, 2021. Loudoun county school board meetings have become tense recently with parents clashing with board members over transgender issues, the teaching of Critical Race Theory (CRT) and Covid-19 mandates. (ANDREW CABALLERO-REYNOLDS/AFP via Getty Images)

At this June 22 meeting, LCPS superintendent Scott Ziegler flat-out lied to those assembled when he said, “The predator transgender student or person simply does not exist. We don’t have any record of assaults occurring in our restrooms.”

This is when the alleged victim’s father, Scott Smith, decided to speak. But instead of hearing him out, the school board silenced him by having him tackled and arrested by police officers.

If that’s not outrageous enough, in an effort to have parents opposed to Critical Race Theory and this transgender madness treated as domestic terrorists by the federal government, Smith’s arrest was cited by the National School Boards Association in a letter demanding federal law enforcement protection.

Then, on August 11, the school board went right ahead and voted for its lunatic trans policy, which will force teachers to use whatever pronouns the student demands and will give males full use of the girls’ bathrooms and locker rooms.

But until the Daily Wire broke the story, all of this was being covered up, and the establishment media, which is just fine with 15-year-old girls being sodomized in furtherance of the cause, is still covering it up. 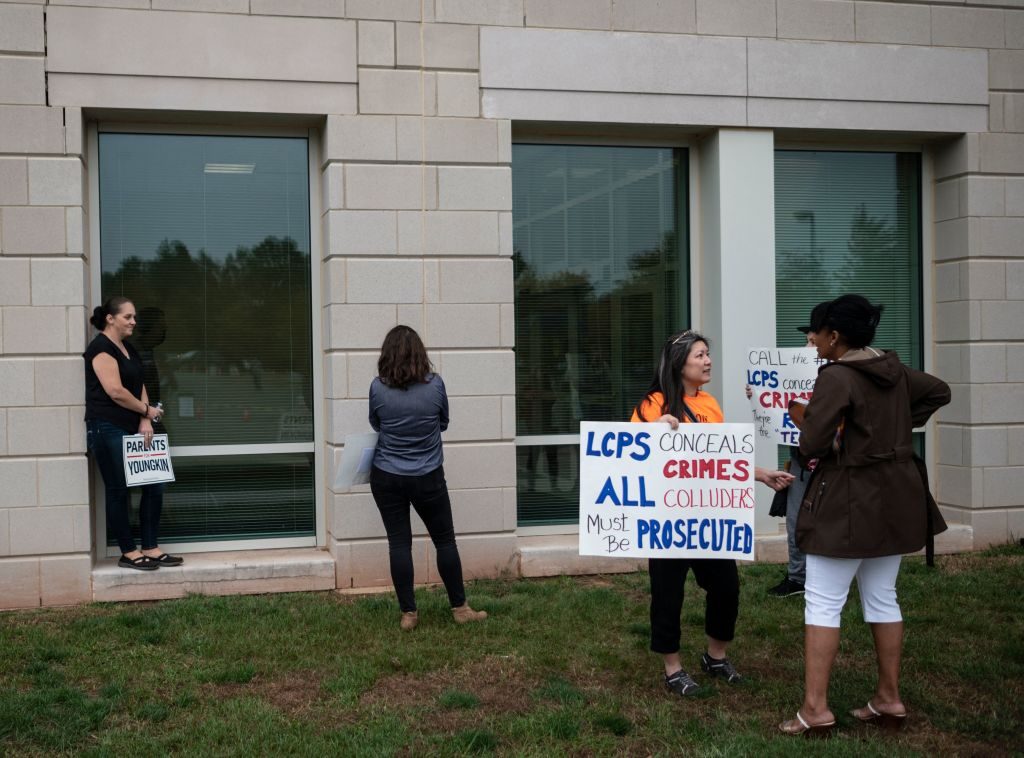 Protesters and activists hold signs as they stand outside a Loudoun County Public Schools (LCPS) board meeting in Ashburn, Virginia as tensions between groups of parents and the school board increased after parents say an allegedly transgender individual assaulted a girl at one of the schools. (ANDREW CABALLERO-REYNOLDS/AFP via Getty Images)

Nevertheless, due to the New Media publicity, LCPS released a statement that finally acknowledged the assault but still attacked Scott Smith as not having registered to speak at the June 22 school board meeting.

Here’s the relevant part of the statement:

Furthermore, LCPS is prohibited from disciplining any student without following the Title IX grievance process, which includes investigating complaints of sexual harassment and sexual assault,” the statement added. “LCPS does impose interim measures to protect the safety of students involved in the original incident, deter retaliation, and preserve the integrity of the investigation and resolution process.

To protect Ziegler, the man who claimed there was no record of any kind of sexual assault, this was added to the statement:

School Board members are typically not given details of disciplinary matters. The board may be obligated to consider long-term suspensions or expulsions and must ensure that students have not been deprived of due process.

Consequently, members of the Loudon County School Board were not aware of the specific details of this incident until it was reported in media outlets earlier this week. We are unable to locate any records that indicate that Scott Smith had registered in advance to speak at the June 22, 2021 board meeting.

Oh, bullshit. If the school board was not aware of the assault, why was Smith literally tackled and arrested? You don’t do that, even if he’s not on your stupid list unless you are terrified of what he has to say.

The entire goal here is obvious. The school wanted to cover up a horrific rape claim long enough to make it legal for sexual predators and mentally ill transsexuals to enter your daughter’s bathroom and locker rooms.

When you see something like this, when you discover that a left-wing school district is this perverse, this monstrous, this cold-hearted and evil in pursuit of The Cause, does my theory about how the organized left wants unvaccinated Trump supporters to die really seem all that crazy? 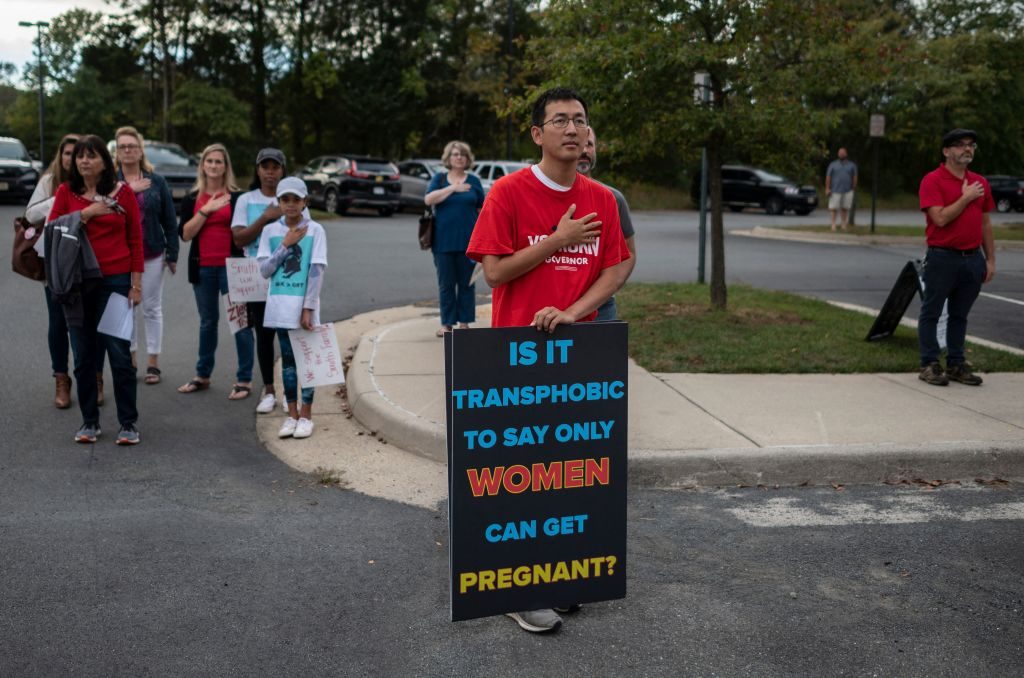 Protesters and activists stand at attention as the national anthem is sung to open a Loudoun County Public Schools (LCPS) board meeting in Ashburn, Virginia on October 12, 2021. (ANDREW CABALLERO-REYNOLDS/AFP via Getty Images)

You must understand how fucking vile and evil these people are.

Other than furthering the cause, they have no morality. A 15-year-old girl repeatedly sodomized? That is just fine with them if, in the end, they get what they want.

The organized left will sacrifice all your daughters to create their sick and twisted version of utopia.

They are coming for your children, and if you refuse to see that, you are as guilty as they are.

Do you really hate Republicans more than you love your own children?

WATCH: Warriors' Draymond Green on Vaccines: 'This Has Become a Political War,' Mandates Go 'Against what America Stands For' Maher: 'How Are We Going to Build Back Better if We Have No Workers and No Supplies?'