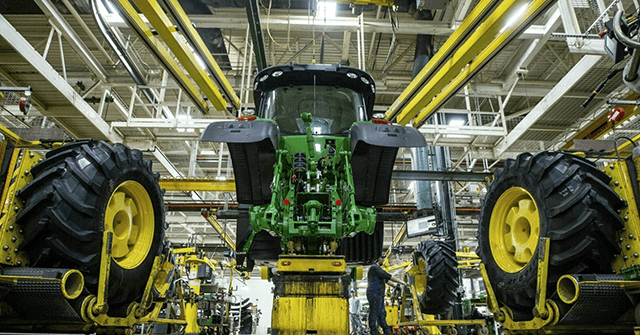 Over 10,000 John Deere workers from 14 different locations are on strike after the United Auto Workers (UAW) union told its members no new agreement was forged with the farm equipment-making giant meeting the “demands and needs” of the workers.

Chuck Browning, vice president and director of the UAW’s Agricultural Implement Department, outlined in a statement, “Our members at John Deere strike for the ability to earn a decent living, retire with dignity and establish fair work rules. We stay committed to bargaining until our members’ goals are achieved.”

Brad Morris, vice president of labor relations for Deere & Company, said the company is known for making yellow and green farm equipment is committed to making a “favorable” outcome for everyone involved in the process, including the employees and communities.

“We are determined to reach an agreement with the UAW that would put every employee in a better economic position and continue to make them the highest paid employees in the agriculture and construction industries,” Morris added. “We will keep working day and night to understand our employees’ priorities and resolve this strike, while also keeping our operations running for the benefit of all those we serve.”

The company noted in a press release it “does not currently have an estimate of when employees affected by the strike will resume activities or the timing for completion of negotiations with the UAW.”

UAW President Ray Curry added, “UAW John Deere members have worked through the pandemic after the company deemed them essential, to produce the equipment that feeds America, builds America and powers the American economy.”

The UAW strike with John Deere comes shortly after approximately 60,000 film, and TV workers authorize a strike with the International Alliance of Theatrical Stage Employees union against the studios to have their schedules improve alone with their pay and working conditions. Argument over Alabama vs. Texas A&M Game Ends in Murder