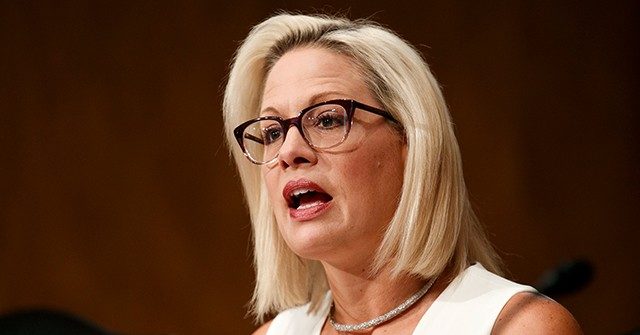 Sen. Kyrsten Sinema (D-AZ), years ahead of a reelection bid, already faces a potentially uphill battle within the Democrat primary from challengers willing to rubber stamp the far left’s agenda, according to a poll from a left-wing polling firm.

The Data for Progress poll surveyed Democrats and independents likely to be Democrat primary voters in Arizona when Sinema is up for reelection. The first-time senator was matched up against four potential challengers in the hypothetical poll: Rep. Ruben Gallego (D-AZ), Rep. Greg Stanton (D-AZ), Phoenix Mayor Kate Gallego, and Tucson Mayor Regina Romero.

The poll was conducted from October 8 to 10, asking 467 likely Democrat primary voters in Arizona. The poll has a larger margin of error of plus or minus five percentage points.

The Data for Progress’s poll showed there is a deep contrast between the Arizona senators. Sinema is currently holding up part of the Democrats’ radical $3.5 trillion reconciliation bill — where Democrats have jammed many far-left policies and entitlements into the bill — due to the senator not committing to the price tag, unlike Kelly, who is willing to vote for such a large spending bill.

Far-left Democrats in Arizona have already been frustrated over Sinema blocking the spending bill and holding up President Joe Biden’s agenda. An effort to find someone willing to primary the senator has already started, even though she is not up for reelection till 2024.

The Hill reported that one group had been named “Run Ruben Run” and was set up by one campaigner to recruit the representative to run. The Hill noted the consensus is Gallego is the “top prospect if Sinema continues to hold out on the party’s key legislative priorities.” Another group called Primary Sinema PAC is raising money for “when a strong challenger emerges.”

Herschel Walker Hopes to Be a 'Uniter' with Senate Run, Promises to Bring 'Integrity' Back to GA, USA