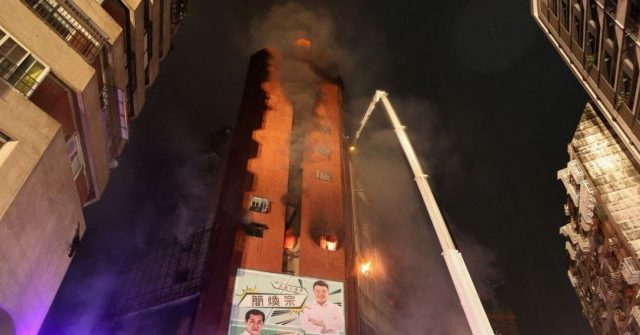 At least 46 people died in an apartment building fire in Taiwan’s Kaohsiung City on Thursday after firefighters struggled to extinguish the blaze due to the 40-year-old building’s “dilapidated” structure, Taiwan News reported.

A fire broke out inside of a mixed-use residential and commercial building in Kaohsiung’s Yancheng District around 2:30 a.m. local time on October 14. Taiwan News described the 13-story building as a “deteriorating structure dubbed locally as ‘Kaohsiung’s No. 1 ghost building.’”

The Kaohsiung City Fire Department dispatched 75 vehicles and 159 firefighters to the high-rise around 3:00 a.m. local time, battling the blaze for roughly four hours. Upon arriving at the scene of the blaze, firefighters found the fire centered intensely on what they described as a “pile of debris on the first floor.”

Some firemen fought the blaze from the ground level, while others used ladder trucks to douse the flames from above and try to rescue residents trapped on the building’s upper levels.

Despite the crew’s coordinated efforts, “the fire continued to rage due to a large amount of debris and the dilapidated state of the building. Several floors suffered severe damage and firefighters struggled to evacuate all residents,” Taiwan News revealed.

“Firefighters were not able to bring the blaze under control until 4:51 a.m. and finally were able to extinguish it at 7:17 a.m.,” the newspaper reported.

The Kaohsiung City Fire Department retrieved a total of 87 people from the building, “including 14 who lost vital signs and were later declared dead, 32 found dead at the scene, and 41 who suffered minor injuries,” Taiwan’s Central News Agency (CNA) relayed.

“Most of the areas above the seventh floor were filled with heavy smoke and caused serious casualties,” Kaohsiung City Fire Chief Li Qingxiu told CNA on October 14.

“The layout and compartments of the building were chaotic. In addition, there were many elderly and weak people living with disabilities, which made it difficult to escape and caused heavy casualties,” he added.

The exact cause of the blaze remains unknown, though Sky News reported on Thursday that “eyewitnesses told local media they heard the sound of an explosion at around 3:00 am.”

A joint team — including a city works bureau, the Kaohsiung City Police Department, and construction technicians — will investigate the cause of the fire and the building’s alleged safety issues in the coming days, according to CNA.