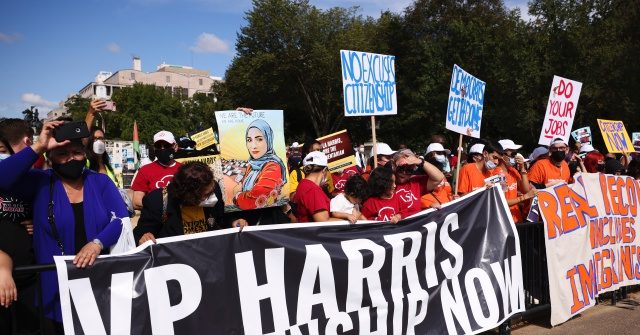 Illegal aliens protested outside of Vice President Kamala Harris’s residence, demanding that she single-handedly bypass the Senate Parliamentarian and ensure that amnesty for illegal aliens is included in a filibuster-proof budget reconciliation package.

On Thursday, the open borders lobbying group CASA staged a protest outside the vice president’s residence. Activists said Harris must intervene and get an amnesty for millions of illegal aliens passed through the Democrats’ $3.5 trillion budget reconciliation package.

“We’re not asking Vice President Kamala Harris to do something that was never done before,” an organizer with CASA stated:

We’re saying use your power, use your leadership, you have the power to decide what gets included. You have the power to ignore the advice of the [Senate] Parliamentarian and include a pathway to citizenship as it has been done before. Now is the time and our families cannot wait. [Emphasis added]

“We need her to act now, not to come up with excuses. Not to tell us it’s not the right time,” the woman said.

Another activist, an illegal alien enrolled in former President Obama’s Deferred Action for Childhood Arrivals (DACA) program, said Harris “promised in her campaign that she would stand alongside immigrants because she, herself, is the daughter of immigrants.”

“But where is she right now? We need her to actually stand by what she said … we need citizenship for all … we’re here to pressure her and remind her of that,” the DACA illegal alien said.

One activist said Harris must “ignore the Parliamentarian’s arbitrary advice.”

“It is your leadership our communities elected … the Biden administration is failing on immigration and the time to repair the errors is now,” the woman said.

Now, Senate Democrats are looking to use a little-known Department of Homeland Security (DHS) maneuver called “parole” that would allow the federal government to declare illegal aliens a significant public benefit and thus prevent them from being deported from the United States.

Analysis shows that up to 7.1 million illegal aliens would get amnesty under the plan.

Open borders activists, though, are unsatisfied with the parole-style amnesty proposal from Senate Democrats and want Harris to bypass MacDonough to include an expansive amnesty into the reconciliation package.

This week, a group of House Democrats said it would be “morally reprehensible” if Harris did not ensure that an amnesty was slipped into the reconciliation package. Likewise, law professors have written a letter to Harris, begging her to ignore MacDonough and include an amnesty.

President Trump to the NRA: ‘Second Amendment Is Not Going Anywhere’