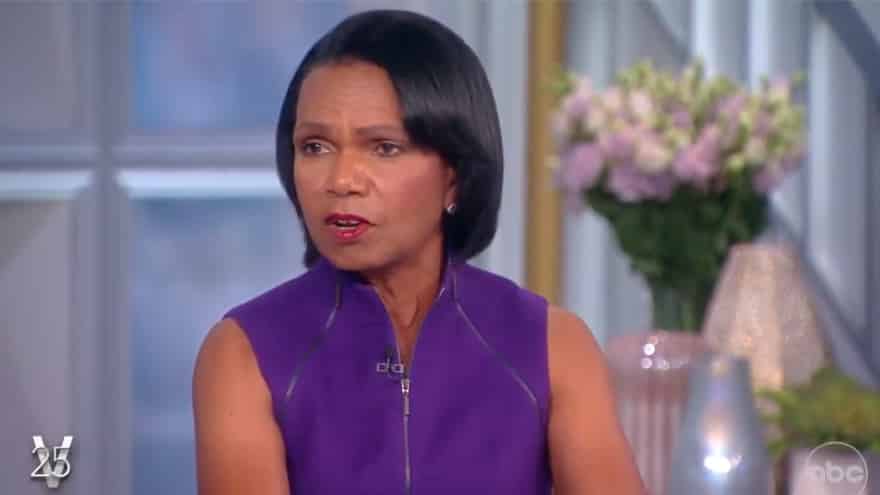 CONDI CRUSH: Condoleezza Rice Tells Adam Schiff to ‘WRAP IT UP’ to HIS FACE

Former Secretary of State Condoleezza Rice didn’t hold back when speaking with Democratic Rep. Adam Schiff regarding his never-ending witch hunt of President Trump; telling the liberal lawmaker it’s time to “wrap it up” and move on.

Rice and Schiff were speaking with ABC’s ‘The View’ when the former George W. Bush aide weighed-in on Schiff’s months-long investigation into allegations the Trump campaign “colluded” with Russian officials ahead of the 2016 presidential race.

“I appreciate what you’re doing for the country — but I really hope you can wrap it up,” @CondoleezzaRice tells @RepAdamSchiff her hopes for the Russia probe: “The country needs to get back to business, so… my greatest hope is that this gets done.” https://t.co/f8u2wc159S pic.twitter.com/428NJFeFUN

“Let me just say this. I’ve spent a lot of time in Washington and I know you’ve got a really hard job and I appreciate what you do for the country, but I really hope you can wrap it up. The country needs to get back to business,” Rice told Schiff, who looked on in disbelief.

That’s my greatest hope is that this gets done,” she added.

Former Secretary of State Condoleezza Rice isn’t too concerned with President Trump’s possible withdrawal from the Iranian nuclear agreement; saying the United States will be “just fine” outside the international pact.

“The allies love this deal, and I certainly hope that in their meeting with President Trump that [French President Emmanuel] Macron and [German Chancellor Angela] Merkel talk about ways to improve the deal if we’re going to stay in it,” Rice told Fox News.

“But if we get out of this deal, it’s going to be just fine,” she said. “The Iranians, I think, will try and stay in because they do want that investment eventually to start flowing,” she added.

President Trump is expected to announce his decision within weeks, with European allies and Iran scrambling to put forth a possible “Plan B” should the US opt-out of the agreement.

THANK YOU FOR YOUR SERVICE: America’s Last World War II Medal of Honor Recipient Has Passed Away

TANKS, BUT NO TANKS: Watch Russian Tank Convoy Ambushed by Ukrainians on the Way to Kyiv