HOW BIZARRE: Biden Oddly Talks About Himself in the Third Person, ‘Biden is a Simple Proposition’ 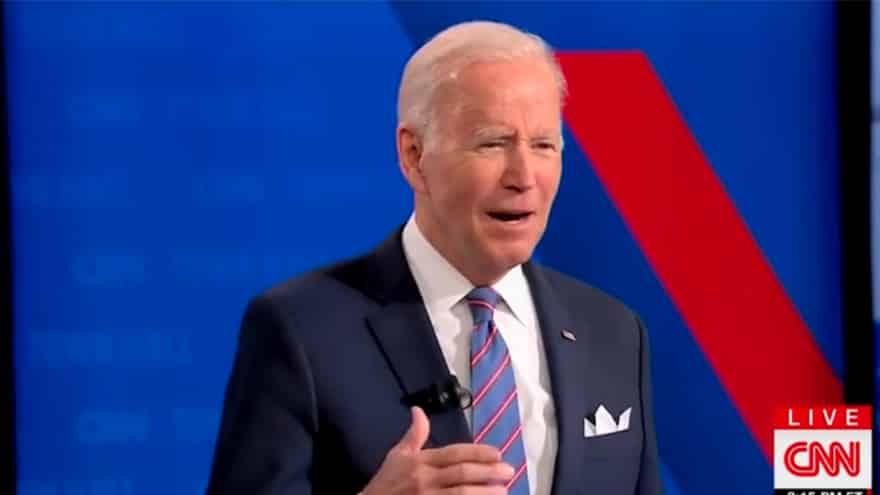 President Biden continued to confuse countless Americans during his “invitation-only” Town Hall on CNN Thursday night; bizarrely referring to himself in the third person when responding to questions.

“You’ve got to work things out. I’m hearing now: ‘Biden’s caved on such and such.’ Look, Biden’s a simple proposition. Biden’s gonna get all the elements of these two bills have profound impacts on economic growth,” said the Commander-in-Chief.

“President Joe Biden’s approval rating slipped deeply underwater in the CNBC All-America Economic Survey as Americans soured on his economic leadership, lost some confidence in his handling of the coronavirus, and grew increasingly concerned about inflation and supply shortages,” reports the financial website.

It isn’t surprising because Americans are feeling it directly in their pocket books. Remember folks, we’re only 8 months into this presidency.

Read my thoughts here – what do you think?https://t.co/o1ccqAFBuZ

Biden’s approval rating is “slipping sharply,” according to a CNBC poll, with the majority of Americans disapproving of Biden’s handling of the economy. pic.twitter.com/VzQdXHkRIs

“If the economy doesn’t get back on track, and the Coronavirus doesn’t reverse course at some point soon, then this is a presidency that’s going to be in real trouble,” added Jay Campbell, a partner at Hart Research Associates.

WATCH TRUMP TORCH MEDIA: ‘Biden a Criminal and You’re a Criminal for Not Reporting It’

‘WHAT IS A RECESSION?’: White House Scrambles to Redefine ‘Recession’ Ahead of GDP Report

TULSI GABBARD: ‘McAuliffe’s Loss is a Victory for all Americans,’ Voters Rejected Division by Race