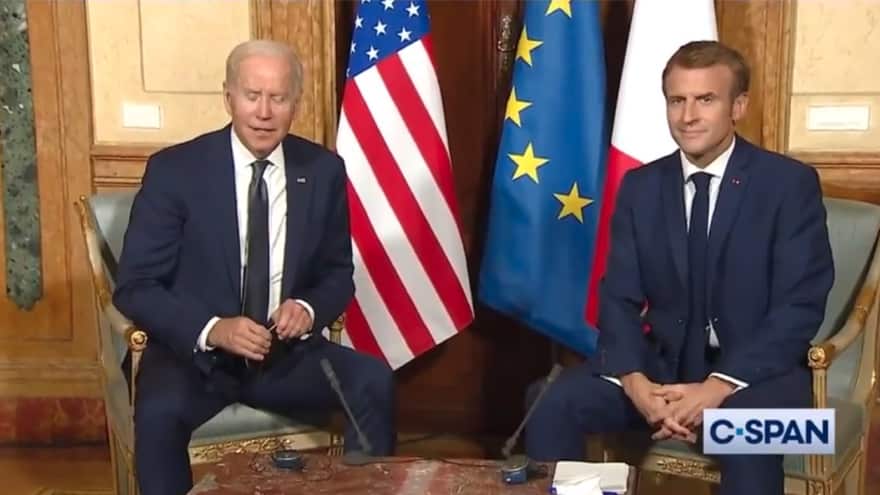 “Is your relationship repaired?” asked one reporter in Rome

“The answer is, I think we, uh, what happened, was uh, to use an English phrase… uh… clumsy,” said the American President.

Climate Czar John Kerry caused a stir on social media earlier this month after telling a French TV network that Joe Biden had “literally had not been aware” of the United States’ Nuclear submarine deal with Australia.

👀 Kerry: Biden “literally, literally had not been aware of what had transpired. And I don’t want to go into the details of it…” https://t.co/WHyXK3OaPa pic.twitter.com/xf55O9EQch

The Biden administration publicly admitted last month that officials should have held “open consultations” with France and other European allies before reaching a nuclear submarine deal with Australia.

The development sparked rage across France and the withdrawal of its Ambassadors from both the United States and Australia.

“The two leaders agreed that the situation would have benefitted from open consultations among allies on matters of strategic interest to France and our European partners,” the White House statement read. “President Biden conveyed his ongoing commitment in that regard.”

“They will meet in Europe at the end of October in order to reach shared understandings and maintain momentum in this process,” the statement read.

“The United States also recognizes the importance of a stronger and more capable European defense, that contributes positively to transatlantic and global security and is complementary to NATO,” the statement read. “In the framework of their joint fight against terrorism, the United States commits to reinforcing its support to counter-terrorism operations in the Sahel conducted by European states.”