BIDEN 2007: If You Leave ‘Billions of Dollars of Weapons’ in Middle East, They’ll Be Used Against America’s Grandkids 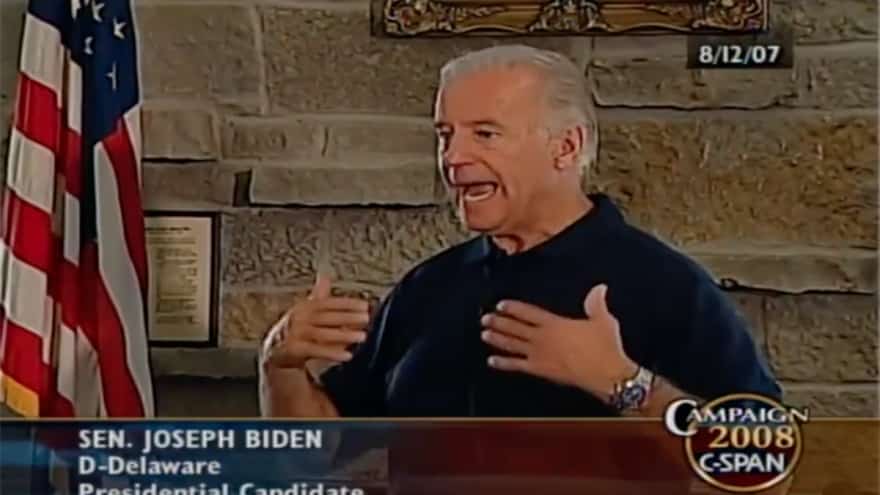 New footage emerged on social media this week showing Joe Biden addressing America’s involvement in the Middle East back in 2007; telling a crowd of voters that if you “leave billions of dollars of weapons behind” they will eventually be used on “your grandchild.”

“You leave those billions of dollars of weapons behind, I promise, they’re going to be used against your grandchild and mine someday!” said Biden.

A new survey from USA Today spells big trouble for Joe Biden, with data showing half of Americans think his presidency is “worse than expected” and nearly two-third don’t want to see him run again in 2024.

“A year before the 2022 midterm elections, Republicans hold a clear lead on the congressional ballot as President Joe Biden’s approval rating sinks to a new low of 38%,” writes USA Today. “A USA TODAY/Suffolk University Poll, taken Wednesday through Friday, found that Biden’s support cratered among the independent voters who delivered his margin of victory over President Donald Trump one year ago.”

“If the election were today, those surveyed say, they would vote for their Republican congressional candidate over the Democratic one by 46%-38%”https://t.co/pAYvVjQPaI

“Nearly half of those surveyed, 46%, say Biden has done a worse job as president than they expected, including 16% of those who voted for him. Independents, by 7-1 (44%-6%), say he’s done worse, not better, than they expected,” adds the outlet. “Nearly two-thirds of Americans, 64%, say they don’t want Biden to run for a second term in 2024. That includes 28% of Democrats. Opposition to Trump running for another term in 2024 stands  at 58%, including 24% of Republicans.”

Watch Biden’s comments from 2007 above.