FLASHBACK: Jen Psaki Says Inflation Could ‘Go Up a Bit’ 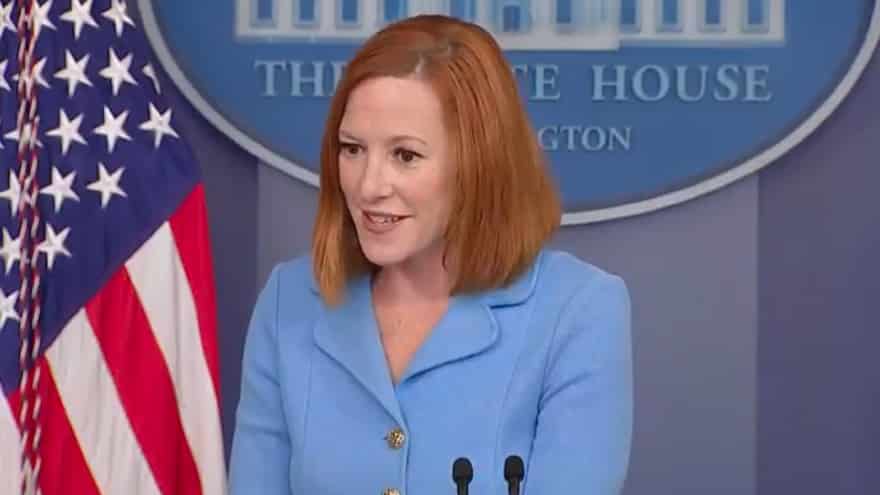 White House Press Secretary Jen Psaki addressed growing concerns regarding rising prices across the United States this week; admitting that inflation will likely “go up a bit” in the months ahead.

“We take inflation incredibly seriously. We watch it closely. The Federal Reserve, who has the purview, has predicted or put out a forecast that we expect it to go up a bit this year. We’ve long anticipated that,” said Psaki.

.@PressSec Jen Psaki: “We take [inflation] seriously. We watch it closely. The Federal Reserve, who has the purview, has predicted or put out a forecast that we expect it to go up a bit this year. We’ve long anticipated that.” https://t.co/byqFT8saZe pic.twitter.com/AQyI0D6DfT

Global chicken supplier Tyson Foods confirmed this week the company will be forced to raise prices to “keep up with inflation” as the economy struggles to recover from the global COVID-19 pandemic.

“Tyson increased its average price for pork by 39.3% in the last quarter, while it raised beef and chicken prices 11.6% and 15.6% respectively. Sales volumes also increased,” adds the global news agency.

The inflation rate in the United States jumped to 5.4% in June as prices for consumer goods soared; posting the fastest pace since 2008 while the economy struggles to recover from the COVID-19 shutdown.

“The Labor Department said last month’s consumer-price index increased 5.4% from a year ago, the highest 12-month rate since August 2008. The so-called core price index, which excludes the often-volatile categories of food and energy, rose 4.5% from a year before,” reports the Wall Street Journal.

U.S. consumer prices rose 5.4% in June from a year ago, keeping inflation at the highest annual rate in 13 years as the economic recovery gained steam https://t.co/HbP9VXcWMp

“The index measures what consumers pay for goods and services, including clothes, groceries, restaurant meals, recreational activities and vehicles. It increased a seasonally adjusted 0.9% in June from May, the largest one-month change since June 2008. Prices for used cars and trucks leapt 10.5% from the previous month, driving one-third of the rise in the overall index, the department said. The indexes for airline fares and apparel also rose sharply in June,” adds the newspaper.

CHUCK CHICKEN: Carlson Calls Schumer ‘Coward’ for Refusing to Appear on His Show

‘THE FAR LEFT HATES EVERYONE, THEMSELVES INCLUDED’: Musk Tweets Criticisms of the Left, Immediately Proven Correct

TRUMP WAS RIGHT: Watch Trump in 2020 Predict a Stock Market Crash if Biden is Elected