BEIJING FIRST? Kerry Says China’s Use of Slave Labor to Manufacture Solar Panels ‘Not My Lane’ 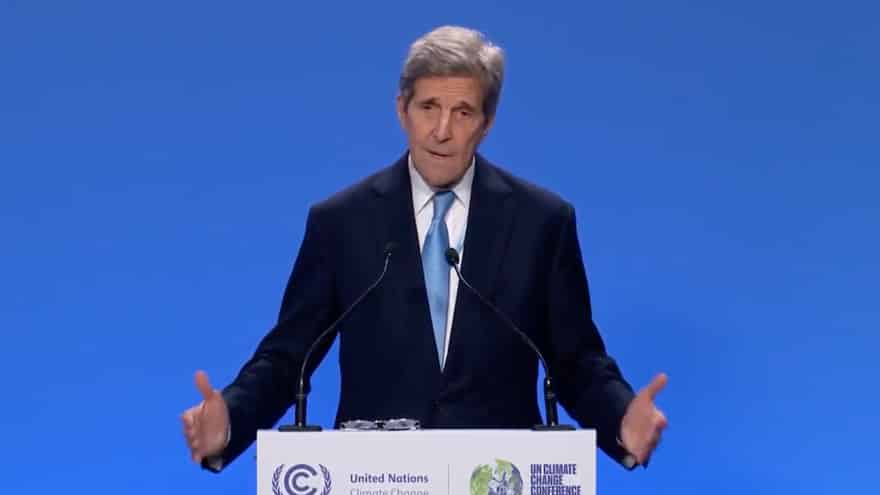 ‘Special Presidential Envoy John Kerry’ confirmed Friday that the USA has rejoined the Paris Climate agreement; saying it’s “good to be back.”

“Well, the scientists told us three years ago we have 12 years to avert the worst consequences of climate crisis,” Kerry responded. “We are now three years gone so we have nine years left.”

“There is no room for B.S. anymore. There’s no faking it on this one,” he added.

“Today’s the day. We’re officially back in the Paris Agreement – again part of the global climate effort. No country can fight this fight on its own. We look forward to a productive year and a successful #COP26 in Glasgow. #GoodToBeBack,” posted Kerry on social media.

The United States officially rejoined the Paris Climate Agreement Friday exactly 30 days after President Biden signed an Executive Order on global warming during his first hours inside the Oval Office.

“The Paris Agreement is an unprecedented framework for global action. We know because we helped design it and make it a reality. Its purpose is both simple and expansive: to help us all avoid catastrophic planetary warming and to build resilience around the world to the impacts from climate change we already see,” added the statement.

John Kerry Is The US Special Envoy For Climate. His Family Still Owns A Private Jet https://t.co/SQUL6ZHxbH

“We look forward to the anti-carbon lectures from a guy who travels the globe on private jets and luxury yachts,” read a New York Post editorial last year.

“While it’s unclear exactly how much Kerry benefited from his wife’s company, private jets have been estimated to emit upward of 40 times as much carbon per passenger as commercial flights,” adds Fox.

GABBARD to BIDEN: ‘Crisis on the Southern Border is the Direct Result of Your Open-Border Policy’

THE POWER OF PALIN: Former Alaska Gov. Still Got It, Destroys Competition in First Round of Special Election