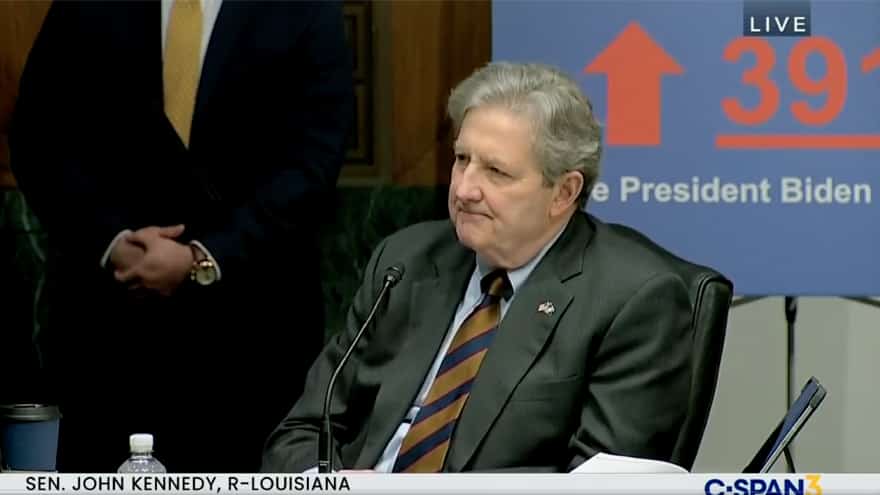 “When was the last time you talked to her about securing the border?” asked Senator John Kennedy.

Sen. John Kennedy: “Vice President Harris, our Border Czar, what kind of grade would you give her?”

Mayorkas: “Vice President Harris is not the Border Czar.” pic.twitter.com/y8zdLXq84w

“The people determining our border policy— in your opinion— are they just incompetent or do they believe in open borders?” pic.twitter.com/d9VSzYafil

100% KENNEDY: Biden’s Immigration Plan Like ‘Giving Whiskey and Car Keys to a Teenager’

Senator John Kennedy perfectly summed up the Biden administration’s response to the spiraling border crisis Tuesday; saying the plan is like “giving whiskey and car keys to a teenager.”

“I think that the reason the vice president went to Guatemala and met with President [Alejandro] Giammattei is to offer him billions and billions of American taxpayer dollars to try to make his country better, and with no disrespect but that’s like giving whiskey and car keys to a teenager,” Kennedy told “Fox & Friends.”

“President Giammattei is an authoritarian. He presides over a corrupted administration. They’re probably going to steal the money. Corruption is rampant,” Kennedy continued. “Now, you don’t have to be Einstein’s cousin to figure all of this out.”

“Here’s what I’ve observed. The Democrats are pretty much in total disarray. President Biden is sort of like Kevin Bacon at the end of ‘Animal House,’ when people were stampeding him and he’s saying, ‘calm down, be calm. Everything’s under control.’ They say they have a ‘framework.’ To me, a framework is when your car has two wheels down, its axle dragging, you’re in the ditch, you don’t have any help and you tell your spouse, ‘Honey, I’ve got a framework to get us out of this ditch,” said Kennedy.

“I think people who are successful financially should be applauded, not criticized in America. But I love this term framework. And I’ve seen a little of it. I know this: They’re going to try to crush small business, and they’re making tax policy on the basis of class warfare,” he added.