McCARTHY: ‘Pelosi is Burning Down the House on Her Way Out the Door’ 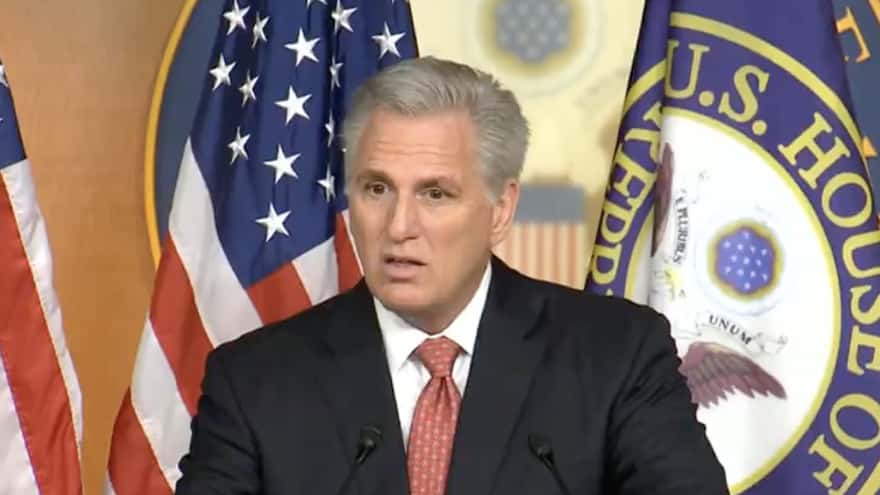 Former Speaker of the House Nancy Pelosi held a bizarre, meandering press conference on Thursday, telling confused reporters that she understands “Wall Street” and that “the currency of the realm” is votes.

The House Minority Leader was speaking with journalists during her weekly address when she launched into her puzzling speech, veering wildly between issues such as DACA, community health centers, Wall Street, the debt ceiling, and Medicare.

“Is this more on the subject than you want to know? Stop me if it is, ok?” Pelosi asked the audience.

“Wall street? It’s wall street,” a confused Pelosi added. “Here the currency of the realm is the vote. You have the votes, no discussion necessary, you don’t have the votes, three months, so that’s how we got to that.”

“But, um, we have to get it passed,” said Nancy. “We have the omnibus bills, all the appropriation bills […] we have community health centers, we have extenders for Medicare, we have many items on the agenda.”

“So that is how that went,” she added.

Rush on Hannity: The Left Has ‘Hijacked’ the NFL

Rush Limbaugh weighed-in on the ongoing controversy swirling around the NFL on ‘Hannity’ Thursday night, telling Sean that left-wing activists have “hijacked the game” to promote their liberal agenda around the country.

“Rush Limbaugh has been one of the strongest voices against NFL players protesting our flag, our national anthem. He is one of the NFL’s biggest fans,” said Sean.

“I woke up Sunday morning after the President made his comments in Alabama, I’m looking at the way the media is covering it and what’s intended to happen on Sunday, and they’ve hijacked this game. The Left has hijacked this game,” said Rush.

“It used to be a respite, it used to be a place you go to escape all this,” he added. “To watch them get caught up in something I don’t think they understand; they’re back-tracking now.”

“Why are they messing around on the side-line? Disrespecting the flag, disrespecting the anthem, what’s the point?” asked Limbaugh. “They’re not accomplishing anything except harming the enterprise. Whatever’s happening in the NFL right now, it’s not how you grow it.”

Watch Rush on ‘Hannity’ above.

WHOOPI BYE: Goldberg Suspended from The View for Holocaust Comments

‘CHUCK’S CHALLENGE’: Cruz Has an Answer for Schumer About the GOP’s Plan to Fight Inflation

FOR YOUR CONVENIENCE: A List of Every Senator Who Voted Against Ted Cruz’s Nord Stream 2 Sanctions