NOT A JOKE: Abrams Tells Maddow She ‘Did Not Challenge the Outcome’ of Her 2018 Loss 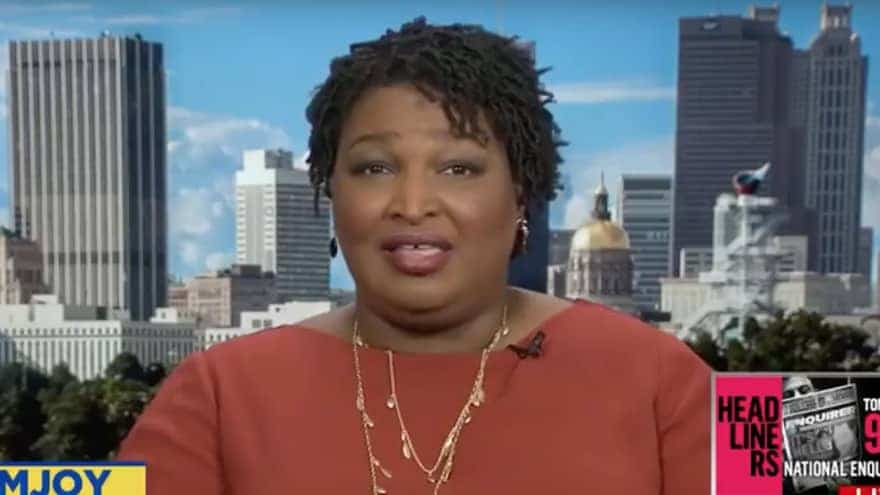 Stacey Abrams spoke with MSNBC’s Rachel Maddow Thursday night shortly after announcing her second bid as Governor of Georgia; insisting she never questioned the results of her 2018 loss to Brian Kemp.

“I did not challenge the outcome of the election, unlike some recent folks did,” the Democrat claimed.

“What I said was that the system was not fair. And leaders challenge systems. Leaders say we can do better. That is what I declared. I could not in good conscience say that, in order to protect my political future, I’m going to be silent about the political present, which is that we have a system under a leader that sought to keep people from casting their ballot, that threw the ballots out, that said that voter suppression was a viable tactic for winning elections.”

Stacey Abrams, who just announced another bid for GA governor, says on MSNBC she “did not challenge the outcome” of 2018 election.

However, the Democrat has said she “won” the contest, claiming there was voter suppression that made it an unfair contesthttps://t.co/KjyJstC5DA

Not only did she never concede, she took pride in never conceding, and spent years telling audiences that she had actually won.

This attempt to rewrite history will not work. https://t.co/vp2VKgkhAh

Stacey Abrams confirmed Wednesday she will launch another bid to become Governor of Georgia; setting-up a potential rematch between the Democrat and Brian Kemp.

“I’m running for Governor because opportunity in our state shouldn’t be determined by zip code, background or access to power,” posted Abrams on Twitter.

#BREAKING: @staceyabrams announces that she will run once again to be governor of Georgia. https://t.co/IeHX25rjCI pic.twitter.com/QwlJX2gROn

I’m running for Governor because opportunity in our state shouldn’t be determined by zip code, background or access to power. #gapol

ABRAMS 2040? Stacey Abrams Says She ‘Plans’ to be Elected President of the USA ‘In the Next 20 Years’

“Do you think the country will elect a woman president in the next 20 years?” asked reporter Clare Malone.

“Do you think it will elect a black woman?” Malone pressed.

“Do you think they’ll elect you?” asked Malone.

“Yes, I do. That’s my plan. And I’m very pragmatic,” Abrams replied.

“Abrams has never held an office higher than a seat in the Georgia House of Representatives, although she did spend several years as a member of the Democratic leadership of that body. Abrams gained national fame for her contentious election against Kemp in 2018 — a race that was seen as a potential bellwether for Republicans in right-leaning states nationwide during what was a wave election year for Democrats,” reports Fox News.

Democratic candidate in Georgia’s gubernatorial race Stacey Abrams claimed she was nearly blocked from voting this week; doubling-down on her previous comments that “voter suppression” led to an “unfair” midterm election.

Abrams was speaking with NPR when she stated an Election Day staffer attempted to stop her from casting her ballot; saying “The day I voted, I had to correct the poll worker who said I had filed for an absentee ballot.”

“I did it quietly. I didn’t turn it into a major conversation because, for me, it was about getting through the process,” she added. “But it was also emblematic to me of the privilege that I have.”

THE END OF WALL STREET NANCY? New Bill Would Stop Congress from Trading, Hit Pelosi in the Pocketbook