BIDEN: USA Can’t ‘Continue to be Red or Blue, We’re a Purple Nation’ 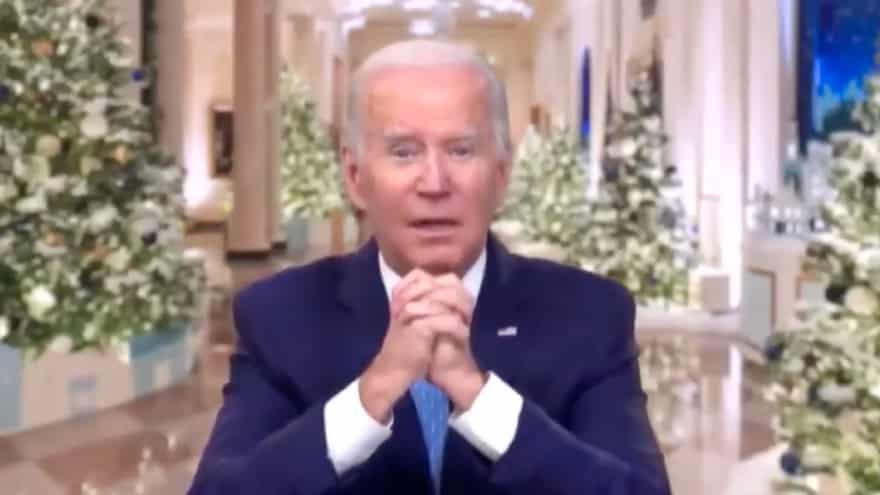 President Joe Biden called on Americans to unite this holiday season; saying the United States of America is no longer “red and blue” but “purple.”

“Look, I got involved in public life because of civil rights and civil liberties issues. Coming from a state that was a good state but had a lot of problems, I think that, I’m not sure Joe Biden is important, except that we’ve got to come together,” said the President.

“I don’t think we can continue to be red or blue. We’re a purple nation,” he added.

Biden’s comments come as a recent report showed his ‘Build Back Better’ program could double child care costs for many working class families.

“It shows that child care costs could increase by up to 102% – and as much as 122% – for some Americans under Biden’s signature economic agenda, which would cap child care costs at no more than 7% of parents’ income for those earning their state’s median income. Parents are required to be working, searching for a job, in school or dealing with a health issue in order to qualify,” reports Fox News.

“For a family with an infant and a 4-year-old, that could mean an additional annual expense of up to $27,000 unless they qualify for the subsidies in the Democrats’ spending bill. About half of families using non-parental child care would fall into that category, according to the analysis,” adds Fox.

“It is challenging to forecast how families would cope with such harmful and disruptive changes in childcare costs,” the professor wrote. “Many families may respond by withdrawing a parent or relative from the workforce to provide the care.”

WATCH: Hillary Says Republicans Have ‘No Conscience, They Have No Spine’

‘PARENTS SHOULD SEE THE DATA’: GOP Demands Answers from FDA on COVID Vaccines for Infants