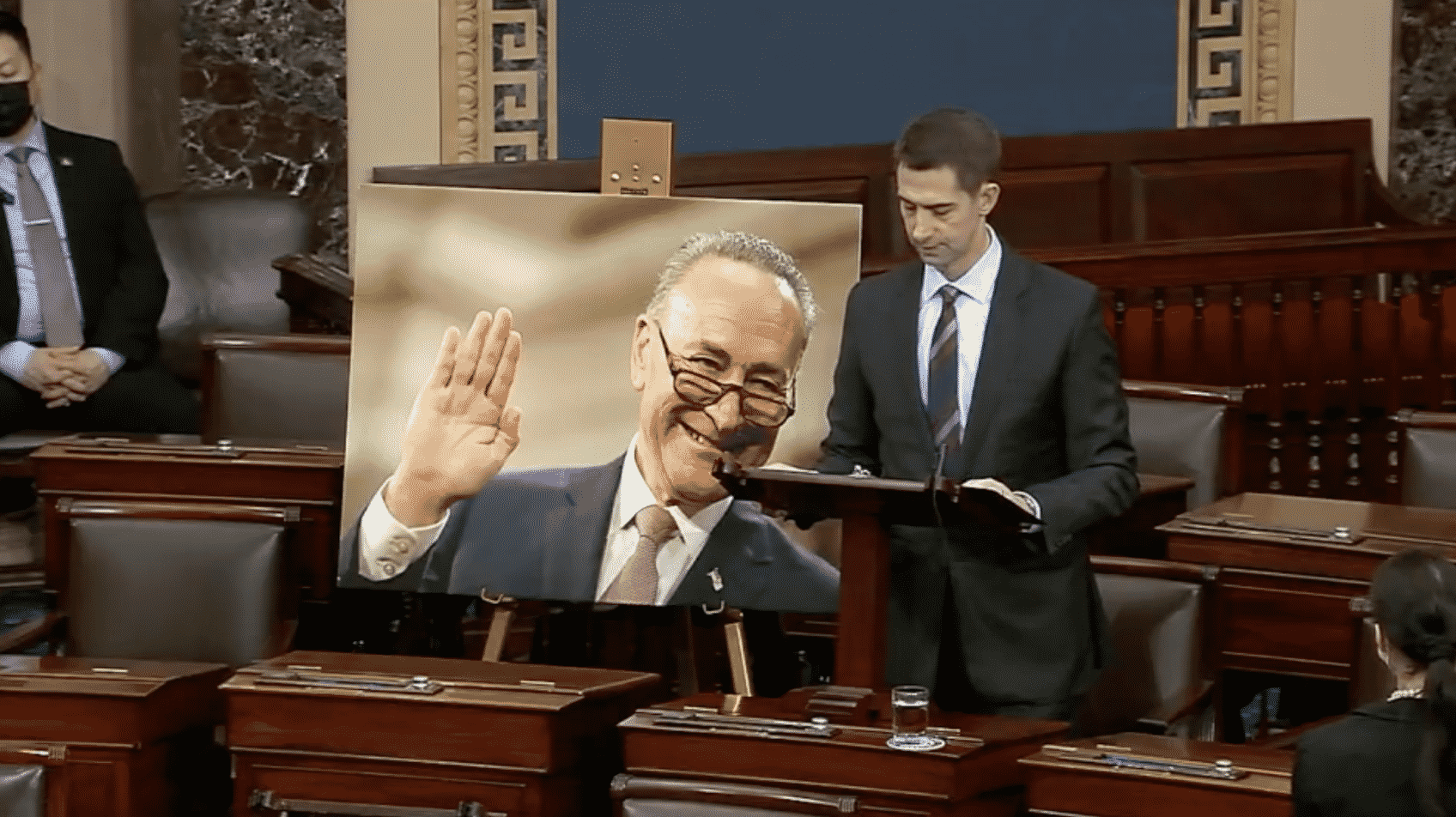 As Senate Majority Leader Chuck Schumer and his fellow Democrats continue their uphill battle to weaken the filibuster in the name of voting rights, Sen. Tom Cotton (R-AR) is there to remind everyone that Chuck didn’t always feel this way.

Cotton hit the Senate floor for some advanced level trolling, reading some of Chuck Schumer’s  comments in defense of the filibuster from 2005, including:

“Right now, we are on the precipice of a constitutional crisis. We are about to step into the abyss. I want to talk for a few minutes why we are on that precipice and why we are looking into that abyss.”

Let me first ask a fundamental question: What is the crisis that calls for the undoing of two centuries of tradition? … Are … Senators merely doing their jobs as legislators, responding to a generalized public calling for the abolition of the filibuster? Clearly not. It is not the American people at large who are demanding detonation of the nuclear option.”

“[T]he nuclear option is being pushed largely by the radioactive rhetoric of a small band of radicals who hold in their hands the political fortunes of the president.”

“Constitutional scholars will tell us that the reason we have these rules in the Senate — unlimited debate, two-thirds to change the rules, the idea that 60 have to close off debate — is embodied in the spirit and rule of the Constitution. … That is what the Constitution is all about, and we all know it.”

“It is the Senate where the Founding Fathers established a repository of checks and balances. It is not like the House of Representatives where the majority leader or the Speaker can snap his fingers and get what he wants. … On important issues, the Founding Fathers wanted — and they were correct in my judgment — that the slimmest majority should not always govern. … The Senate is not a majoritarian body.”

“The bottom line is very simple: the ideologues in the Senate want to turn what the Founding Fathers called the cooling saucer of democracy into the rubber stamp of dictatorship. … They want to make this country into a banana republic where if you don’t get your way, you change the rules! Are we going to let them? It will be a doomsday for democracy if we do.”
“I, for one, hope and pray that it will not come to this. But I assure my colleagues, at least speaking for this Senator … I will do everything I can to prevent the nuclear option from being invoked, not for the sake of myself or my party, but for the sake of this great Republic and its traditions.”

These “are powerful words — but they’re not mine,” Cotton said. “Every word of my speech today was originally spoken by my esteemed colleague, the senior senator from New York, Chuck Schumer. Senator Schumer spoke so eloquently in defense of the Senate’s rules, customs, and traditions when the fortunes of his party looked a little different.”

“My, how times have changed. Now it’s Senator Schumer’s fingers that are hovering over the nuclear button, ready to destroy the filibuster for partisan advantage,” Cotton continued. “Think about it — the narrowest majority in Senate history wants to break the Senate rules to control how voters in every state elect senators. Could there be a better argument to preserve the Senate’s rules, customs, and traditions?”

🚨 BREAKING: Chuck Schumer* speaks on the Senate floor in defense of the filibuster.