Mega-author J.K. Rowling is standing up relentlessly for all people who are harmed by the transgenderism mania afflicting our society. A reliable liberal, Rowling has always been gay-friendly, feminist, and even sympathetic to transgenderism in principle. But transgenderism is a horrible concept in practice, despite Big Left’s efforts to make it appear life-saving and glamorous. Rowling is among the growing number of people speaking out against it and standing up for the countless people it has harmed.

Here are the four main categories of victims of applied transgenderism, along with examples of how Rowling has recently given them a voice on her Twitter account, with its 13.9 million followers:

As any woman can tell you, puberty and adolscence are very difficult for girls. I defy you to find an adult female who wasn’t deeply uncomfortable with her young body at least once. Feminists encourage girls to despise their blossoming womanhood by teaching them that women can’t get ahead and are also constantly at risk of being raped or harassed. Meanwhile, our disgusting pop culture constantly sexualizes girls and shoves women’s fishnetted nether regions in our faces. It’s gross, thus it’s completely natural for girls to be uncomfortable in their own bodies for a while.

Transgenderists weaponize and leverage this universal discomfort to initialize adolescent girls into their cult. The most vulnerable — girls who suffer from mental illness, autism, and abuse — are especially susceptible to the transgenderism ruse. It can appear as a shining path to a new life, a way to kill off your old, despised self without actually committing suicide. But months or years later, many of these “transgender men” come to their senses and regret the things they’ve done to themselves. Their stories have always been attacked, but Rowling is giving them a platform on her Twitter feed:

This breaks my heart. I’ve now spoken to many young women who tell similar stories. I’m appalled that you were let down in this way by people who had a duty of care towards you. Hoping to god the tests give good news and sending you much love ❤️‍🩹 pic.twitter.com/4CNDfjQerC

(PCOS is polycystic ovary syndrome, a disorder often caused by too high a level of male hormones in women. It can lead to infertility.)

Boys with an inclination towards homosexuality and the gay lifestyle sometimes act “girly” when they are young. They may gravitate toward dresses and frilliness. Left alone, they often grow into men who become fabulous designers, costumers, stylists, and other kinds of creatives.

But thanks to the current transmania, effeminate boys who enjoy dressup or who just admire women are all too often encouraged by the adults in their lives to “become” women — a feat which isn’t possible, no matter how many hormones or how much surgery a young person is subjected to.

Far right to little boy wearing a dress: take that off, it means you’re not a real man.
Gender identity theorists: wanting to wear dresses means you’re really a girl.
Radical feminists: boys can wear dresses, you look great!
Which of these two positions are most alike, Andrew? https://t.co/nR0mfguefJ

One woman commented, “My son used to dress up in his sisters clothes, make dresses for barbies from scraps of fabric, raid the little make up I had & gravitated 2wards anything sequined. I bought all my kids up to believe there are not girls things and boys things. He is now a happy, treasured gay man.” 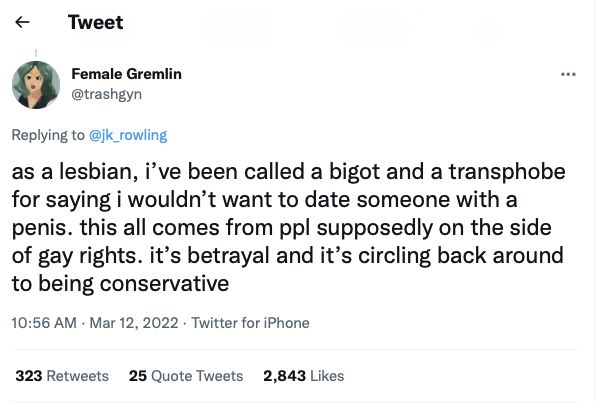 “Thank you for speaking up so powerfully. It’s a tragedy and a scandal that our gay rights organisations are now dedicated to undermining both women’s rights and the very foundation of same-sex attraction,” tweeted a gay man in reply to Rowling.

PJ Media has covered the many ways in which men preteneding to be women have stolen honors and privileges from actual women. Recent examples include Rachel Levine being named Woman of the Year by USA Today and Lia Thomas smashing records while destroying yet another college sport for women. Worse, when women try to express their fear and anger at being erased, they are attacked and hushed by trans enforcers at every level.

Rowling has been a leading voice speaking out on this issue for a while now and faced retaliation from being slandered as a “TERF” (“trans-exclusionary radical feminist”) to receiving death threats. But she is standing her ground and using her outsized bullhorn to defend women’s basic rights.

I don’t think our politicians have the slightest idea how much anger is building among women from all walks of life at the attempts to threaten and intimidate them out of speaking publicly about their own rights, their own bodies and their own lives. 1/3 https://t.co/NtwFcTVgif

Rowling also retweeted Somalian activist Nimco Ali’s comments about how women are routinely told to shut up when they try to defend women and girls from the very real dangers that are unique to being an actual female:

Last week I spoke at an event where women on the panel thought what a woman was could be debated. I was not standing for it and I got this lovely message from a sister who was there. I share this because it’s beyond depressing this is where we are. 1/3 pic.twitter.com/xljd0WGO4F

I’ve said before that I was never the biggest Rowling fan — I found her Harry Potter series to be highly derivative and her liberalism clichéd — but for all that, she did a masterful job of teaching a generation to exhibit courage in the neverending war between right and wrong, no matter the cost. During this Lenten season, we reflect on Jesus’s torment in Gethsemane as he prepared to suffer in order to save others. Likewise (on a smaller scale, to be sure), Rowling knew what she was getting into when she kicked this hornets’ nest, and she decided it was worth the cost to herself to use her position to lift others. The Left will certainly come after her in an attempt to “crucify” her for her courage.

Food Prices Up 20% Over the Past Year

Maxine Waters Calls for Insurrection: ‘The Hell with the Supreme Court’

The Morning Briefing: Do Republicans Have a Legit Shot at the Senate in November?