WARNING: These Pics From a Book in a Georgia School District Will Shock and Disgust You

In Cherokee County, Ga., a group of parents became aware of classroom content that concerned them during the pandemic. Since then, some of them have started digging into the content available in the school library and required in the classroom. What they found is alarming. One mother went viral in a video when she read explicit content from the book Homegoing to school board members in the March meeting. However, the visual content available to students that these parents found is even more disturbing.

The same mother who spoke out at the recent meeting shared content found by the parents with school board members and district officials. She emailed examples daily but ran into a problem when she tried to send images from The Handmaid’s Tale by Margaret Atwood; Graphic Novel by Renee Nault. The book is available in district high school libraries. In the email, the parent noted:

First, I give authority to share this content with applicable personnel within the Cherokee County School District administration department.

Next, these emails were to be sent one day at a time.  However, the content I was sending you was so graphic your email algorithms blocked it from passing.  Yes, we adults cannot share this information, but the content was acceptable enough to pass into our children’s school libraries.  Maybe the IT department should be vetting library books instead of whoever has been tasked.

To get past the algorithm, the mom had to blackout the most explicit parts of the images, and she noted that they were only one example of a recurrent scene where one woman holds down another while a man graphically rapes her. You can imagine what is behind the black boxes on the unedited versions: 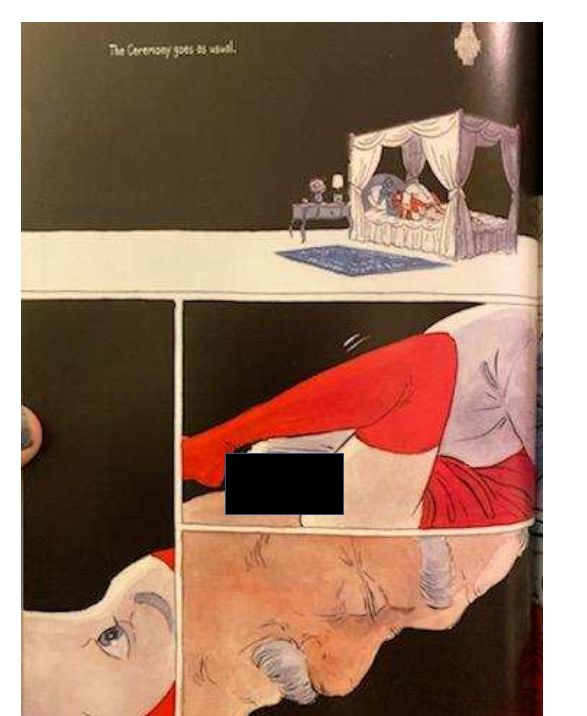 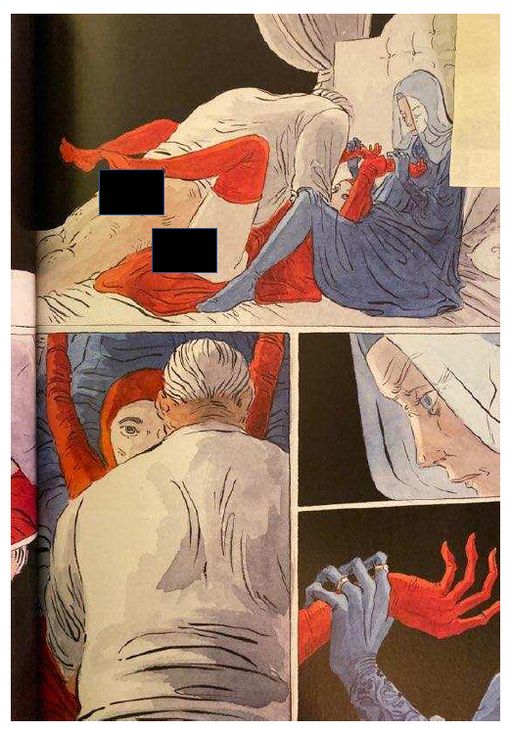 First, we should all question why the district provides high school students with what are essentially comic books rather than the novels themselves. However, when the so-called “graphic novels” depict sexual assault, we should question why this content gets distributed by schools at all. If an adult gave a teenager images like this outside of the classroom, they could get arrested.

Related: Watch What Happens When a Mother at a School Board Meeting Tries to Read Explicit Content Served Up to Students

As the parent noted in her email to the district officials, The Handmaid’s Tale is a series on Hulu. It is rated TV-MA. Programming that is rated TV-MA signifies content for mature audiences. It is equivalent to the MPAA film ratings R and NC-17. Programs with this rating are usually not suitable for minors under 17 years of age — which most high school students are. Content may contain strong, coarse language, explicit sexual content, nudity, or graphic violence. According to IMDb’s Parent’s Guide for the series, 62% rated sexual content and nudity severe, while 73% found the violence and gore severe.

Parents assert the illustrations in the book mirror the visual content in the television series. In addition to questioning why students are reading picture books rather than novels, many parents can legitimately ask why content that contains scenes with graphic physical and sexual violence described in writing or depicted visually is available to high schoolers.

The parents in Cherokee County object to between 150-200 books that are purchased with taxpayer funds. As the mother who spoke out at the board meeting noted in her email to district officials, “If parents would like to individually expose their children to such materials, Amazon can deliver in two days.” Yet, Cherokee County Board Chairwoman Kyla Cromer defended keeping the content parents find objectionable available to all students. In the March meeting, she responded to parental concerns, saying:

As a parent, I can appreciate that you have that in your heart and that is something that you want to control what your child is exposed to. That is your job as a parent. I get it.

Where we draw the line I think first of all is these are choice of books at the library. They are not being forced on anybody to read them. Sometimes the assignments, they are given alternate assignments, but these are library books your child has to go in and check out.

She went on to say there may be an argument for grade-level appropriateness. For example, she noted, what may be appropriate for a high schooler may not be suitable for a sixth-grader. Wow, that’s a genius revelation. She went on:

I also want to say, while you have that ability for your child, I don’t know that you have that ability to prevent other children from accessing books or materials or assignments. And what you’re asking for us to do is for us to take some of this stuff out of the hands of every child in our district. [Interruption from the crowd] You don’t get to tell what other parents get to have their kids have access to.

Is there some large group of Cherokee County parents just dying to assure their children have access to graphic illustrations of rape in their school library? Cromer never said. If they attend the next school board meeting and speak up, I will update this post with that video. To date, these mythical creatures have not come forward to make their case.

GOP Poised to Clean Up in State Legislative Races, Too

The Enemies of Science

Did Anti-Muslim Bigots Really Plot to Blow Up a Chicago Mosque?