A left-wing outlet funded by liberal billionaire George Soros whined that the world’s richest man’s plan to purchase Twitter was a threat to democracy.

Free Press released a statement April 14 headlined, “Musk’s Attempted Takeover of Twitter Would Be Toxic for Its 330 Million Users and Our Democracy.” This follows Tesla CEO Elon Musk’s recently announced $43 billion bid for a hostile takeover of one of the most censorship-obsessed platforms in the country. Free Press castigated Musk for being a critic of “efforts by companies like Twitter and Meta to moderate platform content and restrict the spread of hateful and threatening speech and disinformation.”

Free Press Co-CEO Jessica González railed that “'[u]sers of social-media platforms shouldn’t have to be subject to the whims of bombastic billionaires who are detached from reality and lack any true commitment to free expression, racial justice and democracy.’”

González’ complaint about billionaires is hypocritical given that her own outlet is also financed by billionaires. In fact, two of Soros’ groups ($4,785,000), leftist eBay co-founder Pierre Omidyar’s Democracy Fund ($3,010,000) and three other major left-wing donors have given at least $11,574,000 to Free Press between 2003 and 2019 alone, according to Foundation Directory Online data. Other major left-wing Free Press financiers included the Ford Foundation, which reportedly “funded organizations closely associated with violent [left-wing] activists.” The historically anti-Israel Rockefeller Brothers Fund and pro-abortion Rockefeller Philanthropy Avisors are also Free Press donors. 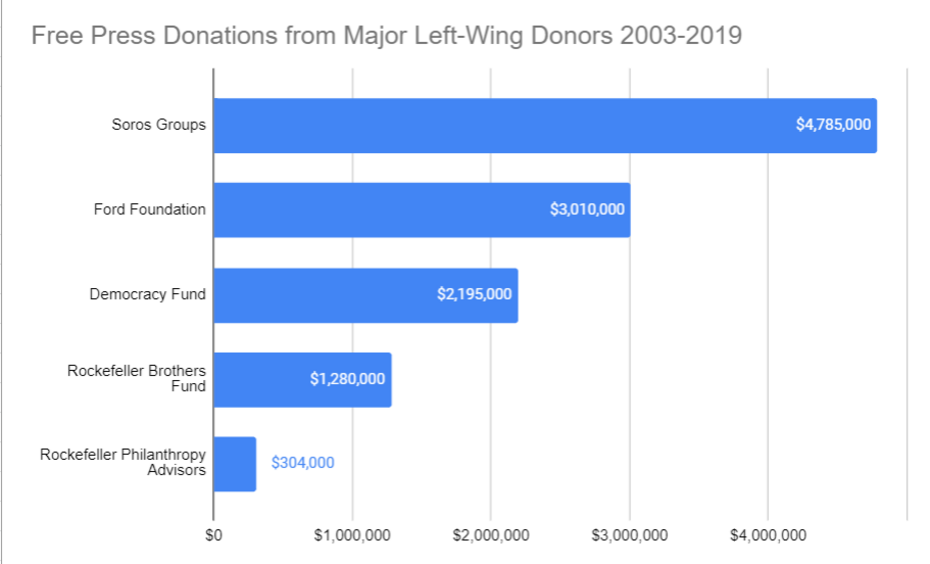 González pleaded on Twitter for the platform to reject Musk’s offer and pontificated: “This isn’t just about money, it’s about public health and safety, civil and human rights, and democracy.” [Emphasis added.]

Musk should stick to cars. Twitter should reject this offer. This isn’t just about money, it’s about public health and safety, civil and human rights, and democracy. https://t.co/u7p7jyJQl5

Complaining about “democracy” is pretty rich coming from the same outlet that tried to get the Federal Communications Commission to censor former President Donald Trump’s coronavirus briefings as “hoaxes.” González’ tweet got heavily ratioed for its disingenuousness, with over 720 comments and only over 20 likes. Tablet Magazine Chief Technology Officer Noam Blum didn’t mince words: “[T]he CEO of Free Press is an enemy of information.”

the CEO of Free Press is an enemy of information.

González even demanded that Twitter increase its notorious censorship operation to satisfy left-wing snowflakes who reel at the thought of free speech. “‘Specifically, we’re calling on Twitter and all platforms to stop amplifying bigotry and conspiracy theories that are toxic to our information ecosystem, threaten public health and safety and undermine democracy,’” Gonzalez griped. This is also hypocritical, given that González’ group was once ripped apart by the FCC for including a violent, hate-filled comment in its leftist petition for the agency to investigate its “history of racism.” The comment questioned whether Republicans should be shot “to reclaim our democracy.” Free Press issued a statement following the backlash acknowledging “that some violent and inappropriate language was included in the comments” of its petition. The group reportedly “withdrew the petition” after the FCC denounced it.

Conservatives are under attack. Contact Free Press at (201) 533-8838 and hold it to account for its hypocritical pontificating about billionaire Elon Musk purchasing Twitter when it gets financing from other left-wing billionaires.