Trump's Endorsement of J.D. Vance, Who Once Called Him 'America's Hitler' and Has Ties to Kasich, Doesn't Make a Whole Lot of Sense

Former President Trump has made some questionable endorsements of late, including that of left-leaning TV doctor Mehmet Oz, who is running for an open Senate seat in Pennsylvania. Over the weekend news broke that Trump has endorsed J.D. Vance in the Ohio Senate race to replace retiring Republican Sen. Rob Portman.

Vance, the author of Hillbilly Elegy, which was later turned into a movie recalling his troubled childhood growing up in Appalachia, was a vocal Trump critic in 2016, even referring to him as “America’s Hitler.”

This you? Shame on you for feeding every despicable stereotype the Left pushes on the Right. And playing like you actually give a damn about people while calling them low income and low education.

“Trump is the fruit of the party’s collective neglect,” Vance opined. “I go back and forth between thinking Trump is a cynical a**hole like Nixon who wouldn’t be that bad (and might even prove useful) or that he’s America’s Hitler.”

Nevertheless, Trump said in a statement, “In the Great State of Ohio, the candidate most qualified and ready to win in November is J.D. Vance.”

“I’ve studied this race closely and I think J.D. is the most likely to take out the weak, but dangerous, Democrat opponent [Tim Ryan] — dangerous because they will have so much money to spend,” he added. “This is not an easy endorsement for me to make because I like and respect some of the other candidates in the race — they’ve said great things about ‘Trump’ and, like me, they love Ohio and love our country,” Trump added.

Early voting is already underway in Ohio for the May 3 primary, with a number of candidates vying to be the GOP nominee in addition to Vance, including former state treasurer Josh Mandel; former Ohio Republican Party Chair Jane Timken; Ohio state senator and Cleveland Indians part-owner Matt Dolan; and businessman Mike Gibbons.

In an October 2016 Tweet, Vance said,  “Trump makes people I care about afraid. Immigrants, Muslims, etc. Because of this I find him reprehensible. God wants better of us.”

After Trump’s election, Vance, who had supported afterthought Evan McMullin for president, wrote: “In 4 years, I hope people remember that it was those of us who empathized with Trump’s voters who fought him most aggressively.”

When never-Trumper Matt Lewis interviewed Vance for his book several years back, he told the Daily Beast contributor that the reason he doesn’t support Trump “is because I think that [Trump] is the most-raw expression of a massive finger pointed at other people” and that he gives the white working class “an excuse to not look inward [and] to not ask tough questions about themselves and their communities.”

In July, Vance issued something of a mea culpa on his prior criticism of Trump, telling Fox News, “Like a lot of people, I criticized Trump back in 2016 and I ask folks not to judge me based on what I said in 2016, because I’ve been very open about the fact that I did say those critical things and I regret them, and I regret being wrong about the guy.”

For his part, Trump acknowledged that Vance “may have said some not so great things about me in the past, but he gets it now, and I have seen that in spades.”

The fence-mending is all fine and good, but Vance has deeper problems that Trump seems to have ignored or dismissed. Jason Hart has the receipts.

If Big Tech billionaire Peter Thiel suckers DJT into endorsing @JDVance1, it won’t just help Thiel remake the GOP in his own image. It’ll be a huge win for the 20-year Team @JohnKasich insider who was the architect of Kasich ’16 — and who now runs Vance’s campaign.
🧾🧵 1/12

Will DJT be duped into endorsing a guy whose campaign is run by the architect of Kasich ’16? Is this what “Conservative Outsider” means? https://t.co/snOzlER125 12/12

Not only that, but Vance is a big proponent of Kasich’s failed Medicaid expansion in the state. Indeed, as Republicans were poised to vote on replacing Obamacare with their own American Health Care Act, Vance bashed the legislation, fearing cuts to Medicaid entitlements. “Two big issues I saw with the AHCA bill as it was structured in the House were, first, that it cuts Medicaid without any alternatives, and, second, it seems to prioritize tax cuts, which may be good or bad, but which don’t seem to be the province of a healthcare bill,” he declared during a speech.

While President Trump, a GOP Senate, and a GOP House tried to reach a consensus on Obamacare repeal, Vance attacked their efforts FROM THE LEFT: https://t.co/sXD1MsJA2O

See also the first 3 grafs of @KFILE‘s reporting at https://t.co/aGT8iHNKJ7 7/

Putting able-bodied, working-age Ohioans on a welfare program created for the elderly, blind, and disabled is @JohnKasich‘s legacy — and it’s a policy @JDVance1 supports so strongly, he lobbied against repealing Obamacare to save it. #OHSen https://t.co/DEfy9UWWOz 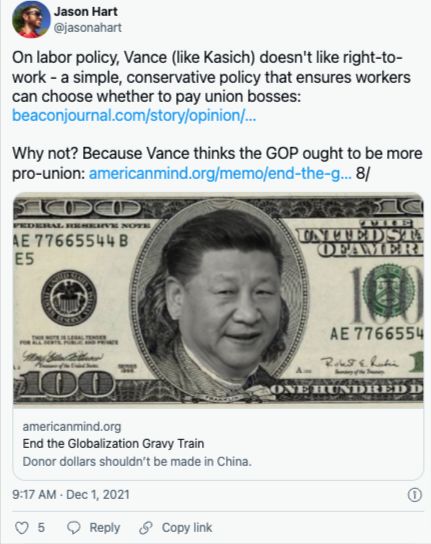 In a 2021 op-ed, Vance decried the decline of unions and bashed common-sense right-to-work laws that ban forced union membership. “While much of our political debate over organized labor has focused on the effects of Right to Work and related laws, the evidence suggests that these types of reforms have minimal effect,” he wrote.

So why did Trump endorse Vance when there are other viable candidates in the race? If I had to guess I’d say it probably has something to do with Vance’s relative financial success (he’s currently worth about $7 million) and the fact that he’s very telegenic. The same goes for his endorsement of that Oprah-loving TV doctor from Pennsylvania. These are less policy-based decisions than perceived popularity contests. And never forget that Trump doesn’t like losers—which is why Mandel, who has run for the Senate twice unsuccessfully, didn’t get the nod, despite his constant genuflecting to Trump and his increasingly bizarre behavior on the campaign trail.

Trump has faced a lot of blowback over his endorsement, including from many GOP leaders in Ohio. More than three dozen Republican leaders pleaded with Trump in a letter to withdraw the endorsement:

While we were working hard in Ohio to support you and Make America Great Again, JD Vance was actively working against your candidacy. He referred to your supporters as “racists” and proudly voted for Evan McMullin in 2016. Importantly, JD Vance is not a registered Republican. To have someone who has not voted in a Republican primary carrying the mantel for the party is troubling. With only a few short weeks until Election Day, an endorsement that cuts against your support and legacy in Ohio will only serve to confuse or upset voters. While primaries are a difficult process at times, they are necessary for our Democracy, and we are confident that a true America First candidate will be victorious on May 3, 2022. We do not support JD Vance for the aforementioned reasons and would urge you not to endorse anyone in this race. Beyond any primary election concerns we have with Vance, there is also a real concern that his previou
s statements about you will work to suppress the turnout of the Republican base in the general election, further risking a Republican majority in the US Senate.

The letter listed comments made by Vance about Trump:

Ohio has a long history of electing establishment types—Mike DeWine,  John Kasich, and Rob Portman, to name a few. It seems that Trump has inadvertently tipped the race toward someone who, although he hasn’t held elected office, nevertheless would be a senator in the mold of Portman and other establishment figures. It remains to be seen whether Trump’s endorsement will help Vance. The latest Trafalgar poll, taken last week before the endorsement, has Vance trailing Mandel, 22.6% to 28%. Other polls have Vance trailing both Mandel and Gibbons badly. The RealClear Politics average shows Mandel at 21%, Gibbons at 19.3%, and Vance at 14%.

This race is still wide open with many undecided voters still in play—myself included. Despite Trump’s endorsement, it may not be Vance’s to lose.