0 for 13. Kamala Harris’s inability to keep staffers working for continued this week as her chief of staff is now leaving. Tina Flournoy is the 13th staffer to depart from the Vice President’s office since last June. And just like the first dozen, the network morning and evening newscasts ignored the latest embarrassment.

Here’s how The Hill reported it on Thursday afternoon: “Flournoy is the highest-ranking official to leave the vice president’s office, and news of her exit comes after a series of other departures from Harris’s staff.”

Unlike the networks, Fox News on Thursday and on Friday covered the breaking story. Peter Doocy explained on Special Report. Doocy noted that Flournoy “is the highest ranking Harris official to leave so far.” 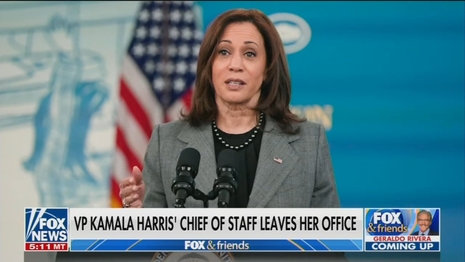 As I noted in a April 5 study for NewsBusters, the networks have not said the names of any of the departing staff. They’ve also buried the awkward nature of how people seem to flee Harris’s office after just a short period of time.

It’s not as though there has been no controversy about these departures. As even CNN explained in December, there is chaos and distrust coming out of the Vice President’s office:

Worn out by what they see as entrenched dysfunction and lack of focus, key West Wing aides have largely thrown up their hands at Vice President Kamala Harris and her staff — deciding there simply isn’t time to deal with them right now, especially at a moment when President Joe Biden faces quickly multiplying legislative and political concerns.

The exasperation runs both ways. Interviews with nearly three dozen former and current Harris aides, administration officials, Democratic operatives, donors and outside advisers — who spoke extensively to CNN — reveal a complex reality inside the White House.

We’ll continue to update this tally as more staffers leave the Vice President’s office. To see my original study on the departures, go here.

Florida Congresswoman Kat Cammack: ‘We Enjoy the Fact Our Governor Has a Set of Cojones’

Video Captures Bodybuilder Getting Shot Over a Parking Spot