The Greatest Trick of All

Magic is the ability to make someone believe something that isn’t true. It follows, then, that most great magicians are keen observers of human psychology and that magic routines are, at base, a skillfully arranged set of techniques for preying on our cognitive biases.

As impressive as the rabbit-from-hat illusions and the sleight-of-hand deceptions of the masters of stagecraft can be, however, these parlor tricks pale in comparison to the societal manipulations that are conducted by the masters of statecraft every day.

Case in point: martial law. I have long said that when martial law actually comes to the “free and democratic” West, people will be cheering it on. In case you didn’t believe me, I present the phenomenon of the public cheering on the most egregious abuses of medical martial law over the past two years as evidence for my contention. All it took was a concerted campaign to get people to fear coronavirus and suddenly the very same people who once denounced those warning of martial law as “conspiracy theory” were loudly applauding the jackbooted thugs of the COVID-1984 police state in their harassment of elderly women and innocent children and random citizens. 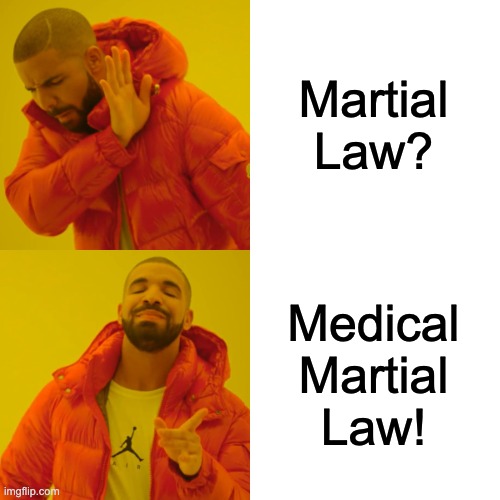 Yes, it’s one thing to theorize about the Stockholm Syndrome that allows—in the memorable words of Aldous Huxley—”the controlling oligarchy who have always existed and presumably will always exist to get people to love their servitude.” It’s another thing to actually see it taking place.

This ability to get the public on board with policies and practices that are self-evidently against their own interest is not just surprising. I am here to argue that it is a type of magic trick.

I mean this in two key senses of the idea of a “magic trick.” Firstly, the would-be social engineers’ ability to reliably martial support for ideas and actions that would have been dismissed as lunacy mere moments before is, at first glance, so incredible as to be magical. But secondly, and perhaps more importantly, this magic, like all such sleight-of-hand, is, at bottom, precisely that: a trick.

Today, let’s take a look up the sleeve of the magicians of social control, expose the tricks they use to garner public support for their agenda, and see how we can break the spell they have cast over the masses.

Do you know about the cheap parlor tricks that the social engineers employ to gain your consent? In this month’s edition of The Corbett Report Subscriber, James exposes the magicians’ tricks. Also, stick around for a Subscriber Exclusive video in which James introduces video editor Broc West to the wild world of (ice) hockey.