Near the top of its home page, the New York Times has published an essay by three professors about a “highly effective” technology to prevent the spread of Covid-19 in “high-risk environments” like nursing homes and places prone to “superspreader events.” Based on more than 500 hours of research, the institute Just Facts identified the same technology in September 2021 and promoted it to scholars, public officials, journalists, and commentators. However, most of them ignored the research while big tech suppressed it, thus costing countless lives.

The technology, called ultraviolet air disinfection, has been proven to stop the spread of contagious respiratory diseases in settings like schools and hospitals for more than 80 years. It is so effective that when it was used in a wing of a California VA hospital during the Asian influenza epidemic of 1958—not a single patient caught the disease. In contrast, the epidemic struck the other wing of the same hospital “with explosive force,” producing a “severe, prostrating illness” among 19% of the patients.

The professors who wrote the Times essay were well-qualified to analyze this issue, as they specialize in “environmental health and how to prevent the airborne transmission of diseases like Covid.” They include:

The scholars emphasize that ultraviolet air disinfection “can end large superspreader events and make public events and dining safer for everyone” and then finish their essay by asking, “What are we waiting for?”

The answer to that rhetorical question is appalling and contains broad lessons that can prevent an enormous amount of harm from Covid-19 and other scourges going forward.

Ultraviolet (UV) light is an invisible part of the energy spectrum emitted by the sun, and it can also be generated by lamps. Multiple studies have found that it proficiently kills airborne microbes, thus preventing the spread of contagious respiratory diseases. These lamps can be deployed in several ways, each with pros and cons.

The most successful studies of UV disinfection systems have been conducted with “upper room” UV. This involves installing UV lamps above people’s heads so that the UV light can’t enter their eyes. Although invisible, the type of UV used for such systems can cause eye pain after hours of direct exposure, which doesn’t occur if the light stays above their heads. When used with fans to increase circulation, upper room UV systems can disinfect the air in a room at very high rates of 57 to 100 times per hour.

Moreover, the professors assert there are “newer, commercially available” UV systems which “do not irritate the eyes” and “can be used safely at lower areas of a room and can directly disinfect the air between people sitting at a dinner table.” However, they don’t document this claim.

Another option is “in-duct” devices that use UV to disinfect air as it passes through heating, ventilation, and air conditioning (HVAC) systems. Lab and field studies have repeatedly found that these systems kill the vast bulk of airborne microbes that flow through them, but their air turnover rates are typically much lower than upper room UV systems. For example, the HVAC air turnover rates in the Washington State Convention Center range from 5.9 to 20.1 times per hour, which is 65% to 94% lower than upper room UV.

With regard to costs, adding in-duct UV to buildings that already have HVAC systems is much less expensive to install and operate than upper room UV. On the other hand, upper room systems are more economical than installing a complete HVAC system. Likewise, the professors write that “the initial costs for equipment and installation of a highly effective” new direct UV system “can often be cheaper than upgrading or replacing ventilation systems.” They also say that these systems use “far less electricity than ventilation and filtration.”

Some studies have failed to find benefits from upper room UV, but as explained in a 2010 paper in the journal Public Health Reports, they were conducted in situations where there was “a high risk of acquiring the same infection outside the location where” the UV was deployed, such as school buses. This is not an issue for places like hospitals and nursing homes, where UV lights can be installed wherever the patients and residents may be.

The bottom line is that well-designed UV systems are incredibly effective at stopping the spread of Covid-19 because they kill SARS-CoV-2 virions instead of merely trying to block them.

Why Governments Missed It For So Long

During the first year of the C-19 pandemic, the World Health Organization, the CDC, and numerous public health officials assumed that Covid is mainly spread by large respiratory droplets generated by talking, coughing, and sneezing. For a prime example, the World Health Organization published a “fact check” in March 2020 declaring without evidence that “Covid-19 is NOT airborne” and “is mainly transmitted through droplets” that “are too heavy to hang in the air”: 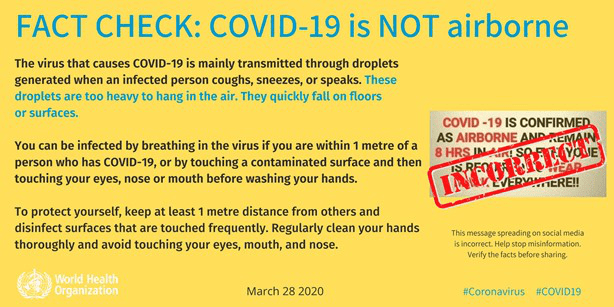 If WHO were correct, upper room and in-duct UV systems would be useless because the droplets would never enter the spaces where the UV light is located. Even direct UV systems would be ineffective because it only takes a second or two for a droplet to travel through the air from one person to another, leaving little time for the UV to penetrate the saliva and kill the virions in it.

In reality, however, at least 20 studies and analyses in science journals have shown that Covid-19 and other contagious respiratory diseases are mainly spread by microscopic respiratory vapors called “airborne particles” or “aerosols.” Like droplets, aerosols are generated by talking, coughing, and sneezing—but unlike droplets—they are also generated by simple breathing and are small and light enough to stay airborne for minutes to hours. Thus, they easily penetrate or circumvent most masks, spittle barriers, and other measures claimed to block the spread of the virus.

UV air disinfection, on the other hand, is ideal for killing aerosols precisely because they are airborne. Hence, they are drawn into HVAC systems and circulate into the kill zones of upper room UV systems.

Highlighting the prevalence and deadly potential of claims that C-19 is mainly spread by droplets instead of aerosols, 14 authors of a June 2020 paper in the journal Environment International:

Six months later in November 2020, the journal Clinical Infectious Diseases published a statement signed by 239 scientists documenting “more than enough supporting evidence” that C-19 could be spreading via aerosols. These scientists also:

Detailed documentation of how public officials came to believe the droplet theory while rejecting the reality of aerosols is available in Just Facts’ September 2021 research on this issue. While disturbing, it pales in comparison to what officials did after they realized they were wrong.

After more than a year of downplaying and denying the threat of aerosol transmission, the CDC and WHO changed their websites in the spring of 2021 to admit that aerosols play a major role in the spread of C-19. But instead of announcing they were mistaken about this life-or-death matter, they silently altered their webpages on how Covid spreads. The CDC also deleted a statement that exposed the fatal consequences of their fecklessness. This cover-up has allowed countless preventable deaths to continue to the present day.

Those sordid actions began on April 30, 2021 when the World Health Organization changed its webpage about how Covid-19 is transmitted by:

Both agencies quietly made those changes as if they had no import. However, epidemiologists knew full well they had deadly implications. For example, Mary-Louise McLaws, an epidemiologist and member of WHO’s Covid-19 infection control committee, told the New York Times in July 2020 that she was “frustrated” by WHO’s stubbornness on the issue of aerosols and wanted them to revisit it. She also stressed that a change in WHO’s position “will cause an enormous shudder through the infection control society” and that “we would have to be prepared to change a lot of what we do.”

The CDC clearly knew that—for on the same day it changed its webpage on how C-19 spreads—it deleted from the webpage a statement which reveals the lethal harm caused by their misinformation. Explaining what must change if Covid is airborne, the webpage stated, “Pathogens that are spread easily through airborne transmission require the use of special engineering controls to prevent infections,” an apt description for ultraviolet air disinfection.

On that same day, the CDC made another blatant attempt to cover its tracks. It did this by creating a “Scientific Brief” titled “SARS-CoV-2 Transmission” which claims, “Although how we understand transmission occurs has shifted, the ways to prevent infection with this virus have not.” This directly conflicts with the CDC’s statement that special engineering controls are needed to control the spread of airborne pathogens. Again, the CDC deleted that statement on the very same day it admitted that aerosols play a major role in the spread of C-19.

The CDC was aware of UV air disinfection technology but relegated it to a “supplemental treatment” when “options for increasing room ventilation and filtration are limited.” Meanwhile, a note at the top of the same webpage and others on cdc.gov instructed people to “wear a mask indoors in public if you are in an area of substantial or high transmission.”

So instead of changing “a lot of what we do,” the CDC and WHO kept advising people to use the same droplet-based measures (like masks) which perform poorly against aerosols and ignore the ones that work well.

The Culpability of Media and Big Tech

The Covid-19 pandemic has also been a pandemic of misinformation in which the people who run influential institutions like the CDC and WHO repeatedly promulgated deadly fictions. In turn, media outlets and big tech companies spread them to the world. Beyond issues like droplets, aerosols, masks, and UV—public health officials have botched vitally important matters like:

Despite that atrocious track record, the executives of companies like Google/YouTube Facebook, and Twitter made these purveyors of misinformation the arbiters of truth on their platforms.

In vivid contrast, Just Facts consistently published verifiable facts that refuted those falsehoods, and a cross-disciplinary array of Ph.D.’s complemented, shared, and cited Just Facts’ research. Yet with callous disregard for actual facts—and thus the wellbeing of people—big tech corporations shadow banned and censored these facts while many media outlets ignored them.

All of this created a torrent of misinformation that contributed to the adoption of policies that will have devastating effects for decades to come. The executives of these big tech companies and media empires have played—and continue to play—an instrumental role in this carnage related to Covid and many other issues.

Click here to be notified of new articles from Just Facts.

Is a Partial Rep Arm Workout Better Than Full Range?