Welcome to Insanity Wrap, your weekly dose of the best of the worst. After SCOTUS knocks down Roe v Wade, here comes the real insurrection.

Trans non-binary Texas middle school teacher explains how she incorporates discussions about queerness and transness in the classroom pic.twitter.com/8O19j44oYr

Would it be unfair to ask how xer students are performing on their standardized tests, or is everything now about nothing but what’s in our underwear?

It’s been an emotional 16 hours or so since — for the first time in history — a Supreme Court decision was leaked.

If the rumors are anything to go by, some SCOTUS clerk launched a one-person insurrection against our legal process.

I’ll get the obvious out of the way first.

The leak was a partisan political hit job, meant to rally public opinion in such an angry, frightening way that at least one judge would recant their heresy.

Instead of getting caught up in the induced fever, I’m going to try and be the voice of reason today.

Wait here a moment while I mix myself a double Bloody Mary because this won’t be easy.

You could say that Roe v Wade — regardless of your stance for or against abortion — was the actual insurrection, an attack on our laws and processes now five decades old. A handful of justices whipped up a constitutionally recognized right out of thin air and forced state governments to abide by it regardless of the will of their constituents.

If you love the Constitution or even if you just respect the rule of law, then you must despise Roe (and Casey, too).

Again, that’s regardless if you are pro-life or pro-choice.

Abortion presents a profound moral question. The Constitution does not prohibit the citizens of each State from regulating or prohibiting abortion. Roe and Casey arrogated that authority. We now overrule those decisions and return that authority to the people and their elected representatives.

Congress is free — has always been free — to pass laws protecting abortion.

That Congress hasn’t, even when dominated by huge Democrat majorities, is a big tell about what Democrats really think about “muh democracy,” which they’re always yammering is in so much danger.

(Sorry, I promised to be the voice of reason, not snark. I’ll try harder to keep the snark in check.)

It was the pro-choice side that usurped the rule of law. It was the pro-life side that did the difficult work of using moral suasion and our legal processes to undo the Left’s assault on our federal system.

Congratulations to the anti-Roe elements in our society — not just for winning, but far more importantly, for winning the Constitutional way.

It took five decades, but they helped repair in at least one small way our damaged institutions.

The Left has left moral suasion so far back on the roadside that they found themselves endorsing actual infanticide in their desperation to protect Roe.

Well, if Dobbs holds as leaked, the pro-choice side has to re-learn the difficult lessons of moral suasion and legal conduct.

Or they could just indulge in a months-long hissy fit — an abortive attempt at an insurrection, if you’ll forgive the tasteless pun.

My money is on the latter, and so is yours.

Before We Continue, a Brief Palate Cleanser…

Subtlety, thy name is Dog.

Bull in a China Shop

The Shanghai lockdown — now well into its second month — has gone so poorly that they’re starting to do the exact same things in Beijing:

Many local governments have ordered residents not to leave their cities unless absolutely necessary and have imposed lengthy quarantine requirements for people coming from areas where Covid cases have been reported. The Chinese Transport Ministry expects 100 million journeys to be made over the holiday — a 62 percent plunge from last year.

As a month-long lockdown continues in the financial hub of Shanghai, the Chinese capital of Beijing is grappling with a new Omicron outbreak that has put officials and residents on edge.

Many Beijing residents have rushed to stock up on food and daily necessities over the past week, fearing a Shanghai-style lockdown could cause shortages.

Remember omicron? The variant so nasty that most people who had it never realized they were sick, and the ones who did reported nothing worse than a sore throat?

Yeah, China’s locking down again over it to assuage strongman Xi Jinping’s ego because he has this notion that he can fight an endemic virus with brute force.

Geopolitics author Peter Zeihan says he expects “a full lockdown of Beijing within the next several days.”

If anything good comes out of Communist China’s lockdowns, it might be this: Hollywood could finally figure out that China isn’t a reliable source of revenue and stop kowtowing to the CCP.

Maybe it’s a long shot, but Hollywood really cares about nothing other than money.

Progressives have given away their two favorite go to responses on abortion.

“My body my choice” rings pretty hollow after Vax mandates.

“It’s a women’s issue” is tough if there’s no definition of woman.

I have the feeling that “women” is about to get re-redefined from “birthing people” to “aborting people.”

I’m kidding, but only mostly, because you never can tell in what way — or just how far — the Left will bend the language.

EXIT QUESTION: If “aborting people” were to become the new thing, how do you think that would play politically with Normal-Americans?

Thugs in blackshirts (say, maybe we could call them that!) used intimidation and street violence to break up a peaceful political rally.

Whatever we call them, they call themselves “Anti-Fascist.”

You’d have to be today’s craziest person in the world to believe that. 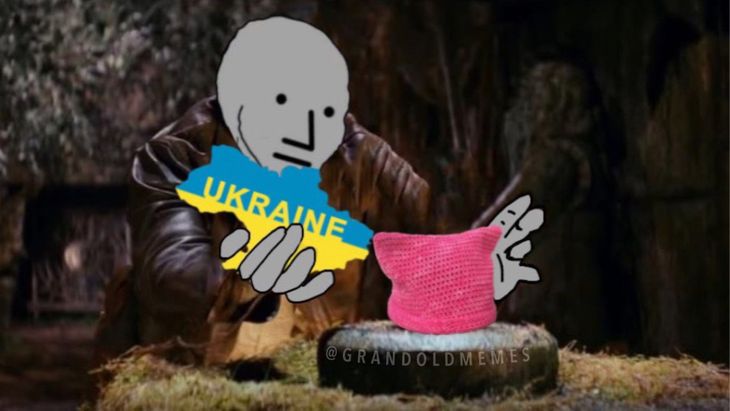 Hillary for President in 2024? It Could Happen.

What Happens When a Country Goes All in on the Green Agenda? 200 Dead, as Sri Lanka Literally Runs Out of Gas