As The Gateway Pundit has reported, Moss was seen in surveillance footage pulling suitcases full of ballots out from under tables to be tabulated.

What’s Up, Ruby?… BREAKING: Crooked Operative Filmed Pulling Out Suitcases of Ballots in Georgia IS IDENTIFIED

Moss’ mother, Ruby Freeman, was also caught on video shoving stacks of ballots through the voting machines numerous times late at night after all of the election observers were sent home.

UPDATE: More on the Suitcase Vote Scam, the Elections Supervisor and that Strange “Pass” Between Mother and Daughter That Was Also Caught on Video

The John F. Kennedy Library Foundation issued a statement on April 21 praising Moss for continuing to work as an election processor despite backlash from being caught on camera ballot harvesting during the 2020 presidential race. 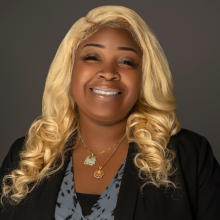 “As a registration officer, Moss mostly handles voter applications and absentee ballot requests. She also helps to process the vote count on Election Day, in addition to other duties. In the wake of a close vote that tipped the state of Georgia to Joe Biden, Trump and his supporters falsely accused Moss of processing fake ballots for Biden during the late-night hours of Election Day. After being identified and targeted by Trump and his followers, Moss received so many death threats and racist taunts that she was forced to change her appearance and go into hiding. She carried out her duties remotely as much as possible. Although state officials repeatedly debunked the Trump camp’s lies about Moss, she continued to receive threats and harassing messages from Trump loyalists nearly a year after the election,” the John F. Kennedy Library Foundation said ahead of the award ceremony. “Despite the onslaught of random, undeserved, and malicious attacks, Moss continues to serve in the Fulton County Department of Registration & Elections doing the hard and unseen work to run our democracy.”

This morning, the @JFKLibrary awarded our client Shaye Moss one of its #ProfileInCourage Awards. We are so proud of Shaye and her mother, Ruby Freeman, for standing up to the lies that were spread about them in the aftermath of the 2020 election.

In December, Freeman and Moss sued The Gateway Pundit, Jim Hoft and Joe Hoft for allegedly conducting a “campaign of lies.

UPDATE: More on the Suitcase Vote Scam, the Elections Supervisor and that Strange “Pass” Between Mother and Daughter That Was Also Caught on Video

Protect Democracy, the far-left organization funding the lawsuit contend TGP’s reporting, which showcases the two women’s engagement of election fraud, ignited online and in-person harassment against them. Freeman and Moss also filed a lawsuit against Trump’s former attorney Rudy Giuliani. Both lawsuits are is still ongoing.