(CNSNews.com) – In March, which was the first full calendar month after Russia invaded Ukraine, U.S. imports of Russian goods increased, according to newly released data from the Census Bureau. 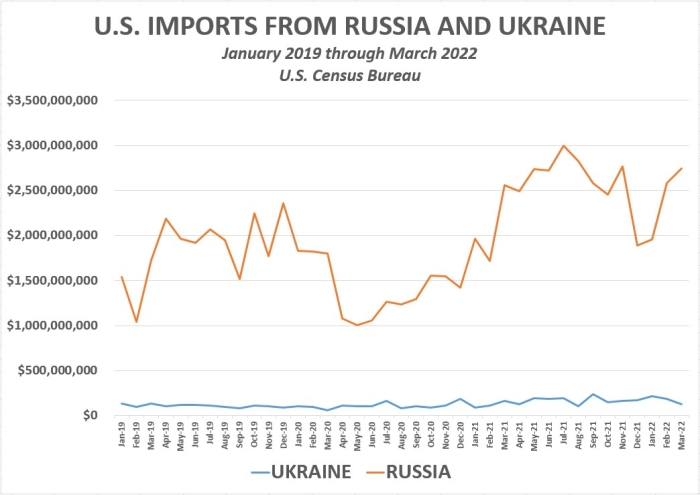 As the United States was increasing its imports from Russia in March, the U.S. Congress began working on two bills aimed at imposing economic sanctions on Russia. On March 8, according to the legislative timeline presented on Congress.gov, Rep. Lloyd Doggett (D.-Texas) introduced H.R. 6968, the Ending Importation of Russian Oil Act. “This bill prohibits the importation of energy products from Russia,” says its summary.

The House passed it the next day. However, it did not pass the Senate until April 7—even though it was unanimously approved.

President Biden signed it into law on April 8.

The bill passed the House on March 17, but did not pass the Senate until April 7. President Biden signed it on April 8.

The Census Bureau will not report the April U.S. export and import numbers until June 7.

On April 22, the Congressional Research Service published a report that summarized the actions Congress took to sanction Russia after it invaded Ukraine.

“Since December 2021, the United States and other warned Russia’s leadership that severe sanctions would follow a new attack on Ukraine,” said the CRS report.

“Congress has provided financial support for Ukraine since the start of the war and supported sanctions and related measures against Russia,” said the report. “The Ukraine Supplemental Appropriations Act, 2022 (P.L. 117-103 Division N) provided $13.6 billion in ‘humanitarian security, and economic assistance for Ukraine and neighboring countries. Congress also passed legislation prohibiting the import to the United States of Russian oil and other energy products (P.L. 117-109) and suspending normal trade relations with Russia and Belarus (P.L. 117-110).

“In addition,” said the CRS report, “the Senate passed the Ukraine Democracy Defense Lend-Lease Act of 2022 (S. 3522), which would expedite the leasing or lending of U.S. defense articles to Ukraine, and the House passed the Ukraine Invasion War Crimes Deterrence and Accountability Act (H.R. 7276), which would direct the President to submit a report to Congress on efforts to collect evidence related to war crimes and other atrocities.” WATCH: Reporter tries to draw Gov. DeSantis into Trump, Pence fight but DeSantis is having none of it