New intel reveals China may be preparing another Pearl Harbor…

China has been honing its ship-killing skills for potential future conflicts on new targets in a remote desert, according to new satellite photos reviewed by USNI News. New analysis shows the People’s Liberation Army is testing the ability to hit ships in port with long-range ballistic missiles.

Since USNI News reported China has been building aircraft carrier targets in the Takmalakan Desert, other target sites have emerged forming a string of large-scale target ranges running along the eastern edge of the desert, according to new satellite photos. Several of these are naval and two have layouts that appear to be modeled on ships in port.

Eight miles southwest of an elaborate aircraft carrier layout, a site with full-scale piers and a destroyer-sized ship-like target was constructed in December. A test missile hit a dead center on the ship replica in February and thent the target was then quickly disassembled and is now gone, according to more recent images.

This new target was discovered as part of the research into aircraft carrier targets, which had been found by All Source Analysis (ASA) with more details revealed by high-resolution satellite imagery from Maxar Technologies.

Another similar naval base target was found about 190 miles southwest by Damien Symons, an independent defense analyst. This location was built in December 2018, but had escaped notice until now. The pier layout is similar to the destroyer-like site, and it also includes ship targets, with one in the same place as the latest target.

The nature, location and strikes on these sites all suggest the targets are meant for testing ballistic missiles.These hypersonic anti-ship ballistic missiles (ASBMs) are an increasingly significant threat to warships. 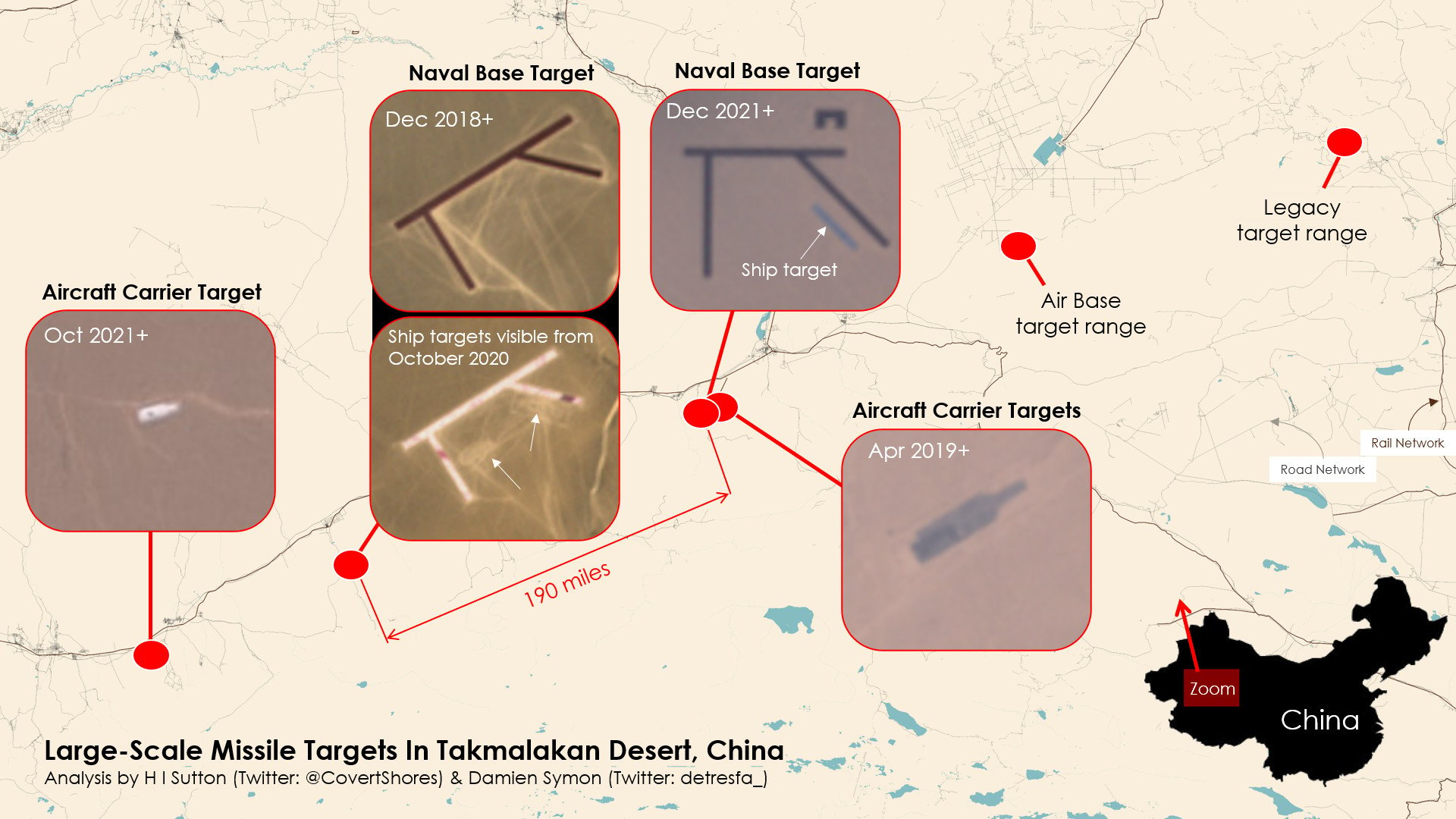 China is known to have been developing several ASBMs. Two types, the DF-21D and DF-26 are land based. Another type, designation unknown, is carried by the H-6 bomber. And there is now confirmation that the Type-055 Renhai Class cruiser can launch a smaller one, provisionally identified as the YJ-21.

Damien Symon said that there are signs of sophisticated targeting.

“The layout of the targets is very calculated,” he said.“The orientations, shapes and sizes are consistent across multiple targets. There is nothing haphazard about these sites.”

The targets appear to be shaped by laying metal sheets on the ground. “This is a different material to the piers and buildings” Symon adds. “It may reflect heat or radar differently, this also might give us an indication of the complex systems and effort behind these experiments.”

The naval base target destroyed in February was similar to the one Symon found. It is almost a duplicate of the older target, he said

Modern ‘dumb’ ballistic missiles have small circles of error probability, a measure of the distance from the aiming point where there is still a 50 percent chance of it hitting. But if the aiming point is on the pier of a crowded port, most of the CEP is still water, and near-misses into a harbor are unlikely to have the desired effect.

The Chinese missiles may use infrared, optics or radar to form a picture of the target. They could then adjust their trajectory by tiny amounts to land exactly on the target. From open-source information one cannot conclude whether the missiles are using infrared or radar, but there are indications of both. Modern targeting sensors are typically connected to artificial intelligence, allowing the missile to discern targets and choose the intended or highest-value option.

ASBMs, if they are able to discern a ship from a pier, could inflict a killer opening blow against an enemy navy. The fear is fleets could be decapitated before they can escape to open water or disperse.

With at least four ASBM weapons in its inventor has caused concern in the Pentagon and were cited in the Department of Defense’s most recent Chinese military power report.

Howard Schultz Back as STARBUCKS CEO as Thousands of Baristas Unionize…