Both Republicans and Democrats have been forced to reconfigure their election strategies only six months before the midterms due to the unprecedented leak from the Supreme Court indicating Roe v. Wade will be overturned.

Many Democrats have made clear they intend to hammer opponents across the aisle on the implications of Roe being overturned and while Republicans have celebrated the decision, several have largely focused on the leak and others have been reluctant to press the abortion issue.

The Republican campaign strategy has instead emphasized other issues ahead of the midterms, such as increased prices due to inflation and the ongoing energy crisis.

“The top issue is still inflation. People are worried about the rising cost of gas and rising prices at the grocery store. That is what is affecting people’s everyday lives,” Torunn Sinclair, national press secretary for the National Republican Congressional Committee, told The Daily Caller News Foundation.

Candidates in battleground races have argued that abortion would likely still exist in their states without Roe. In Nevada, leading Republican Senate primary candidate Adam Laxalt called the decision a “historic victory” but also said that abortion is “currently settled law,” because “the people of Nevada have already voted to make abortion rights legal in our state,” Politico reported.

In Wisconsin, Republican Sen. Ron Johnson, who faces reelection in November, said “abortion is not going away,” even though it “might be a little messy for some people,” The Wall Street Journal reported.

“I just don’t think this is going to be the big political issue everybody thinks it is, because it’s not going to be that big a change,” he said.

Abortion-rights demonstrators protest in front of the U.S. Supreme Court building on May 10, 2022 in Washington, DC. (Photo by Tasos Katopodis/Getty Images)

Sinclair cited a Texas abortion law passed in 2021 that has already severely restricted abortion access as proof restrictive measures do not hinder Republicans like Democrats expect. The law bans the procedure after a fetal heartbeat is detected, typically around six weeks of pregnancy.

Should Roe be overturned, the state of Texas also has a trigger law that would ban all abortions 30 days after it’s tossed, except in the case where the mother’s life is at risk or there could be “substantial impairment of major bodily function,” The Texas Tribune reported.

However, some conservative activists and Republicans have suggested the party go on the offensive on the abortion issue.

Mallory Carroll, vice president of communications at the Susan B. Anthony List, said Republicans need to be more aggressive and use the opportunity to “expose the extremism” of the Democratic platform, citing Democratic Sen. Catherine Cortez Masto, who has already gone after Laxalt on the issue, Politico reported.

“We just want to encourage all candidates to go on offense … regardless of the state because, even in deep-blue states, the level of extremism that Democrats have reached is really untenable,” Carroll told TheDCNF. “That’s something we’re communicating to all of our candidates.”

The National Republican Senatorial Committee sent similar talking points to its candidates after the leak, arguing conservatives should go after Democrats by tying them to unpopular abortion policies, like late-term and taxpayer-funded abortions.

A CNN poll released after the leak showed those in favor of overturning Roe were almost twice as likely to say they were very enthusiastic about voting in November compared to those who want to keep the landmark ruling in place. Even among pro-choice women in the suburbs, a key demographic that Democrats have courted in recent years, the economy is the top concern.

Across the aisle, however, Democrats dove headfirst into the issue, with House Speaker Nancy Pelosi issuing a press release Monday stating the party would “fight relentlessly to enshrine Roe v. Wade as the law of the land.”

Liberals have already begun to seize on Republican Senate Minority Leader Mitch McConnell’s remarks hinting at the possibility Republicans pass a national ban on abortion if Roe is no longer in effect, The Hill reported. (RELATED: McConnell Trolls Trump With Monogrammed Whiskey Gift To Fellow Senators)

“In light of the Supreme Court’s decision, upcoming decision, Leader McConnell acknowledged that a national ban on abortion is now possible without Roe, if Republicans reclaim the majority — hear that, America?” Democratic Senate Majority Leader Chuck Schumer said in response, The Hill reported. 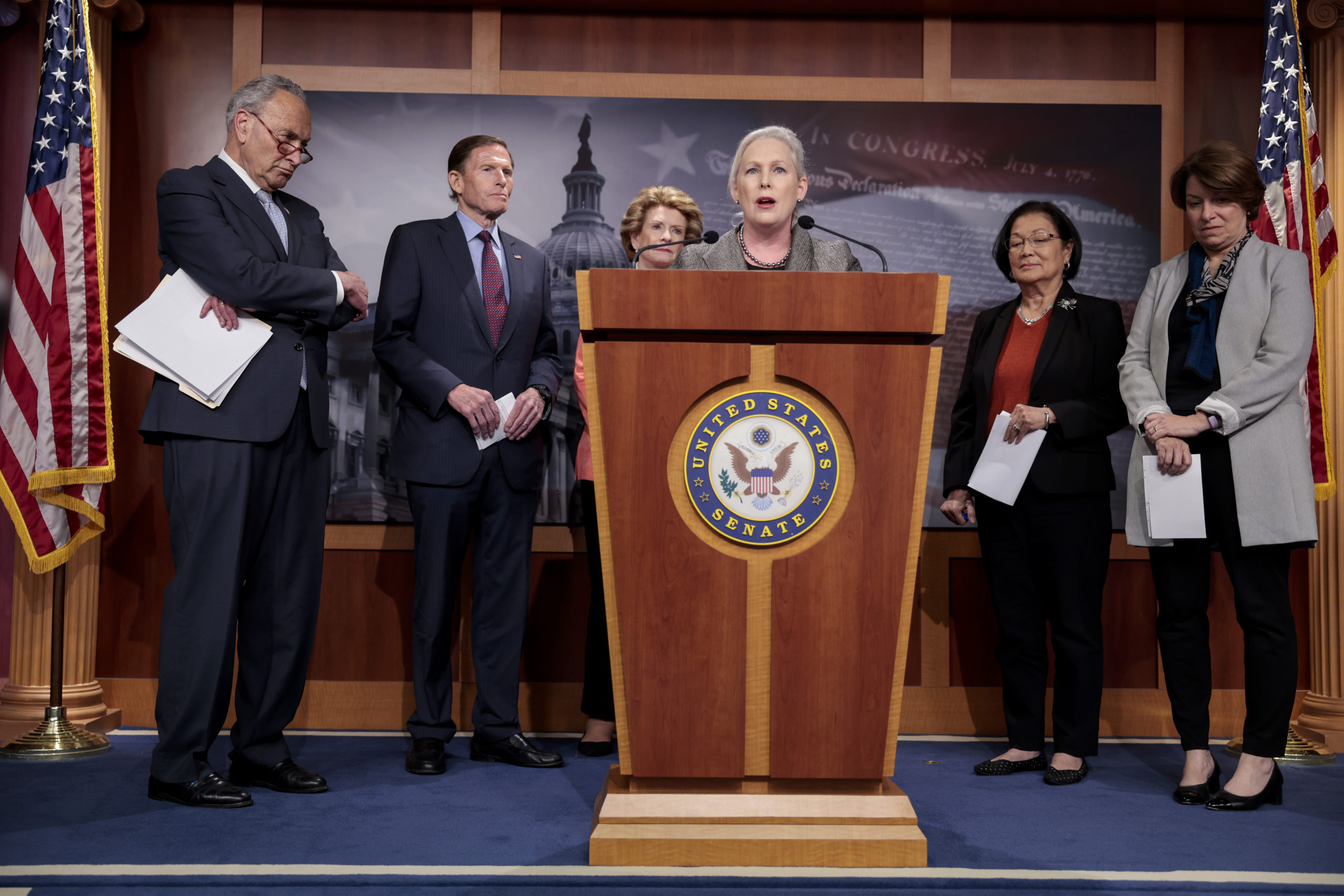 Sen. Kirsten Gillibrand (D-NY) speaks at a news conference on the U.S. Senate’s upcoming procedural vote to codify Roe v. Wade at the U.S. Capitol Building on May 05, 2022 in Washington, DC. (Photo by Anna Moneymaker/Getty Images)

“They’re gonna use every single dirty trick in the book, so I do think that we should be a little more on the offensive about the integrity of our institutions and protecting the Supreme Court from intimidation, from bullying,” Carson Steelman, press secretary for Heritage Action, told TheDCNF. (RELATED: Democrats In Danger Of Losing Key Senate Seat)

Carroll told TheDCNF that the issue of abortion should be left up to the states, but said Republicans choosing to promote a federal ban would not conflict with that message.

“I think they go together,” she said. “I mean, the leader’s right that in the past, pro-life lawmakers here in Washington have talked about the need for federal protections and they’ve taken action to that regard.”

“The best pro-life law is the one that can pass and can save lives,” she added. “I think they’re compatible.”