Expanding the map: GOP to run ads in deep blue Colorado and Washington

It’s smart strategy by the NRSC to pin Patty Murray and Michael Bennet to President 38 Percent but the face-morph gimmick in the ad below made me laugh. “Wait, is her face changing? What is she turning into? Oh — oh, it’s just Joe Biden.”

Patty Murray won her last election in Washington by 18 points in a cycle in which Republicans gained total control of the federal government. If her state really is in play this fall, it’s night-night for Chuck Schumer’s Senate majority.

Colorado isn’t as blue as Washington but it’s getting closer. Biden won Murray’s state by 19 points two years ago and Michael Bennet’s state by almost 14. Bennet is also in the NRSC’s crosshairs, thanks to Republican primary voters there having wisely chosen sane candidate Joe O’Dea over crank Ron Hanks. The face-morph effect in this one is *chef’s kiss.*

Murray’s seat is a biiiiiig stretch for the GOP, so much so that I wonder if it’s a fake-out to try to bait Democrats into spending money to defend it. (“What are Republicans seeing in their internal polls?!”) But Bennet isn’t as much of a reach. Notwithstanding his state’s blue tilt in recent years, he’s never quite made it to 50 percent in his two Senate elections. He barely won in 2010 and then claimed a modest 5.5-point victory in 2016. If gas prices start rising again, if October brings news of another quarter of shrinking GDP, could O’Dea surf a red tsunami to an upset victory? I wouldn’t bet the mortgage against it.

The NRSC’s map is officially getting bigger, Politico reports:

The NRSC is spending $765,000 on a week’s worth of television ads in Washington, in addition to $250,000 in Colorado. Democrats in each state have already been on the attack against the Republican challengers there, suggesting the party anticipated that their incumbents could find themselves in tight races.

Murray’s campaign has run multiple ads hitting Republican challenger Tiffany Smiley for her support for former President Donald Trump and self-described “pro-life” beliefs. And in Colorado, the Senate Democrats’ top super PAC, Senate Majority PAC, spent millions of dollars in the Republican primary in an unsuccessful attempt to stop Joe O’Dea, a GOP candidate who has branded himself as an independent-minded moderate.

Public polls since June have shown Murray’s lead over Smiley anywhere from 5 to 20 percentage points, leaving uncertainty about how close the general election race will actually be there.

There’s an optimistic view of what the NRSC is doing here and a pessimistic view. The optimistic view is obvious — they think November’s going to be so punishing for Dems that national momentum will do part of the work that advertising normally does. Instead of spending, say, $5 million to help Blake Masters in Arizona, maybe they’ll spend $4 million and save the other million for a high-risk, high-reward bet on O’Dea in Colorado. The wind is at their backs. Time to go on offense!

The pessimistic view is that some of the Republican candidates in battleground states are so weak that the NRSC might need to chart a different, more desperate path to a Senate majority. Politico ran a story a few days ago about the organization having to reassure nervous donors that they can still win a majority if Mehmet Oz goes belly-up in Pennsylvania. Which is true: They have a solid chance of winning in Nevada, Georgia, and Arizona, all of which would flip blue seats to red ones. And in a 50/50 Senate, all they need for control is to net one pick-up.

But having to find a path to 51 seats without PA is not a position the party expected to be in at any point this cycle, let alone in mid-summer. The polling for Oz keeps getting gorier, though, with the latest coming from the group Center Street:

52/38 for the Democrat among likely voters in a state Biden won by a point is about as bad as things could realistically be for the GOP in a national climate as favorable as this one. In a cycle like 2018 that was favorable to Democrats, this race would already effectively be over. As it is, I expect the gap will close as Republican voters grudgingly reconcile themselves to Oz, but it may never get closer than “competitive-ish” between the two. Oz continues to suffer from terrible favorability numbers, splitting 26/53 compared to Fetterman’s 46/32. And as you can see in the table, an eye-popping 19 percent of Republicans prefer Fetterman to Oz compared to just six percent of Dems who prefer Oz to Fetterman.

I don’t think I’ve ever seen a crossover number that big, particularly in a race where the guy drawing the big crossover vote is more ideologically extreme than his opponent. Presumably most of those Republican voters will come home to the GOP as they discover that Fetterman has AOC’s politics or after Trump campaigns in Pennsylvania for Oz and twists their arm to do so, but don’t underestimate Fetterman’s working-class appeal. A MAGA voter sizing up the two candidates who asks himself “Which of these guys is more like me?” isn’t going to land on the Republican this time. Fetterman really might flip an outsized share of Republican votes this fall. And if he does, Dems will start looking at him in 2024, health permitting.

By the way, since it’s officially “bedwetting season,” here’s the latest generic ballot polling from RCP. If the NRSC is feeling emboldened about expanding the map, it’s not RCP’s numbers that are inspiring that feeling. The margin between the two parties is now under one point: 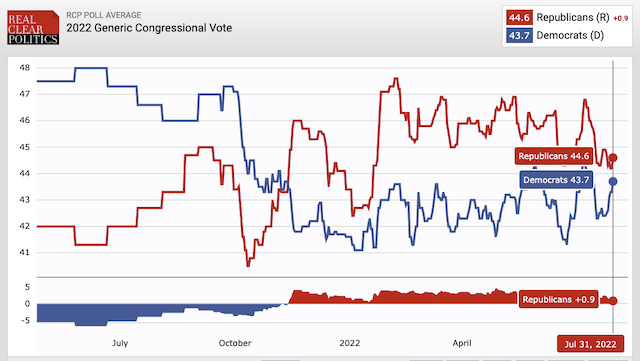 It’s worth noting that the Democrats’ gains lately aren’t the product of one freakishly encouraging survey distorting the overall picture. They’ve gained ground according to several different pollsters. Rasmussen had Republicans up 10 points ten days ago and now has them up five. YouGov has seen the Democrats’ lead grow from three points to six. Suffolk found the parties tied in June and lately has Dems ahead by four. And Emerson had the GOP up three and now has them up one. Maybe the NRSC should save the money it’s spending on Murray and Bennet and focus on battlegrounds instead.

Monogamy is next in line to go

Dissent is disappearing in science

Election Day: Is Powerball run by Democrats? A day late is not how it works