I’d call this shocking, but is it really? “Rules for thee, not for me” has been the standard position of many COVID hawks in public roles since the start of the pandemic. If you missed it in yesterday’s post, DeSantis reminded an audience in Florida this week how quickly scientists relaxed their guidance against mass gatherings in 2020 once those gatherings involved a cause to which they were sympathetic.

💥DeSant1s On [email protected] Pox: “Do not listen to their nonsense. I am so sick of politicians and we saw this with COV1D, trying to sow fear into the population.”👏👏pic.twitter.com/zXfp8Jqioh

Even so, for all the hypocrisy about avoiding crowds, officials of every stripe have stuck reliably to the message that if you have reason to believe you’re infected, you should isolate and not emerge until you’re negative on a rapid test. It’s one thing to mingle in a crowd and expose yourself to the risk of COVID when you’re uninfected; it’s another to mingle in a crowd and expose others to the risk of COVID when you think you might be infected — or know that you are. If you’re under the weather during a pandemic, you stay away from other people until you know for a fact that you’re not contagious. Period.

Senate Democrats are calling an audible on that rule, though, now that they’re on the cusp of passing Build Back Better as the clock runs out on their majority. Via Tara Palmeri:

Senate Democrats, some of whom have decried their G.O.P. colleagues’ lenient attitude toward masking, have adopted an unofficial “Don’t Test, Don’t Tell,” protocol of late, particularly as they endeavor to pass the historic Inflation Reduction Act this weekend. One senior Senate aide told me, “They’re not going to delay it if a member has gotten Covid. Counterparts are saying they’re not going to test anymore. It’s not an official mandate but we all know we’re not letting Covid get in the way. The deal is happening. Less testing, just wear masks and get it done.” When Chuck Schumer was asked about a plan B today in case someone drops out with Covid he said: “We’re not talking about a plan B. We’re going to stay healthy.” Another source said that if you catch Covid “you can bring your ventilator and still vote…”

Health issues have plagued Democrats this year. It’s not just COVID, although Joe Biden and Joe Manchin have each had a case recently. It’s Pat Leahy having been out of commission for weeks after falling at his home. It’s Ben Ray Lujan having survived a stroke this past spring. It’s John Fetterman — not a senator yet but increasingly likely to be one — having suffered his own stroke in May, from which he’s still recovering. And it’s the fact that the oldest sitting member of the chamber, Democrat Dianne Feinstein, is now 89 years old and frail.

The 50/50 majority could turn in a 49/50 minority at any moment, long enough to upend Schumer’s schedule even if a senator’s absence is only temporarily. So if Palmeri’s sources are right, they’re just … not going to test until the bill is passed. They’re going to roll the dice.

If only those who had to attend funerals via Zoom in 2020 because it was too dangerous to gather with family had had that option.

The most one can say for Dems blowing up the rules of basic COVID prevention this way is that death is less likely to result now than it was in the past:

The first two years of the pandemic were characterized by peaks and valleys of infection, when a wave would send case counts skyrocketing for a few weeks and then we’d get months of quiescence as we enjoyed our immunity dividend. That’s not how it works anymore. Hospitalizations aren’t soaring and then crashing; they’ve been rising for three months steadily but only gradually, with barely an uptick in the number of ICU cases. 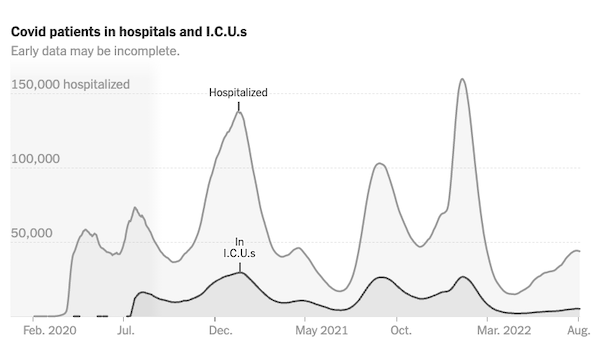 I still don’t know of any expert who’d say it’s fine to stop testing and gather with possibly infected people because the virus isn’t as killing as many people as it used to. But if Schumer and the rest want to argue that COVID is less likely to kill them now than it used to be, fair enough. After all, Joe Biden had only a mild case and he’s the world’s oldest man.

You would think Palmeri’s item might create a political opening for McConnell and the GOP. They should demand that senators be tested before entering the chamber over the next few days to vote on BBB. You can’t be too careful, they might say. We have a responsibility to protect those around us. Democrats would seethe at that hypocrisy, knowing that there are many more anti-maskers and anti-vaxxers on the right than there are on the left. But if some Democrat’s test happened to be positive, Senate business would grind to a halt. There’s no filibuster in reconciliation — but there are rapid tests!

Biden: Corporate greed that only materialized a year ago is the cause of inflation, or something

Is Ukraine a patsy in Darya Dugina’s murder?