(Photo by Sincerely Media on Unsplash)

With today’s societal demands that people have the right beliefs, extol the correct ideologies, affirm society’s politically and ideologically righteous statements, there’s little room for people who are accused of misbehaving.

Even when they are cleared of the allegations.

One such situation has been documented by the Free Beacon, which reported on a demand that Harvard University cancel a professor who was accused of sexual misconduct.

Even though the school’s own Title IX office has dismissed the claims against anthropologist John Comaroff.

The report explains, “Students and professors at Harvard Law School are demanding the university punish a 77-year-old anthropology professor over allegations of sexual misconduct that Harvard’s own Title IX office has dismissed.”

The details appear in a petition from Harvard’s Graduate Student Union, which insists that the law school cancel a class Comaroff teaches, because of now-refuted claims that he sexually harassed three graduate students.

The Free Beacon documented, “Harvard’s Office of Dispute Resolution concluded that most of those allegations—including an allegation of sexual assault—were without merit. It found only a minor violation of Title IX, an off-color comment by Comaroff that investigators conceded had ‘no romantic or sexual intention,’ according to Comaroff’s lawyers.” 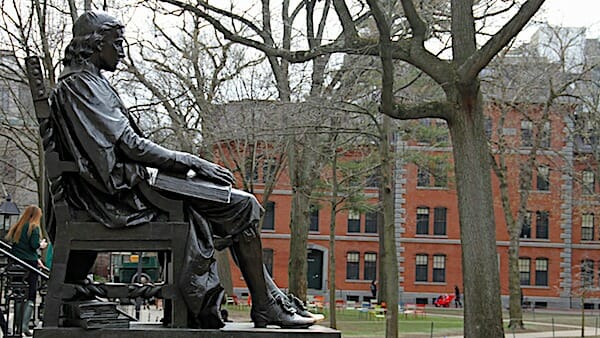 A statue of John Harvard on the campus of Harvard University in Cambridge, Massachusetts (Image by Monica Volpin from Pixabay)

That facts apparently don’t matter, the report pointed out, as, “The petition nonetheless accuses Comaroff of sexual ‘violence’ and argues that his presence in the classroom would pose ‘a serious risk of continued harm.’ Its signatories include Harvard Law professor Nikolas Bowie, who sits on the board of the American Civil Liberties Union in Massachusetts, as well as a dozen law students who’ve worked for public defenders.”

Ruth O’Meara-Costello, one of the lawyers working with Comaroff, was stunned: “It is shocking that an employee union is calling for a Harvard employee to be summarily punished and cast out of the university community based upon allegations that the university’s process found him not responsible for or that have never been investigated.”

She called the petition effort nothing more than “mob justice.”

The report explained there are multiple influences, including that legal activist organizations on the left and labor unions have moved into extremism.

“The three women who accused Comaroff of harassment—Lilia Kilburn, Amulya Mandava, and Margaret Czerwienski—are all active in the union, which has for years lobbied Harvard to take a tougher stand on sexual misconduct. In February, Mandava and Czerwienski were elected as the union’s vice president and sergeant-at-arms, respectively, amid a well-publicized battle with the university over its handling of the Comaroff case,” the report said.

The students accused Comaroff of kissing and touching without consent and fantasizing about one student being raped.

“Harvard investigators determined that Comaroff never touched Kilburn inappropriately, but had warned her against traveling to Cameroon with her same-sex partner—because, he said, gay people in the country are often targeted for ‘corrective rape,’ a practice that has been documented extensively by human rights groups and the U.S. government,” the report said.

The school did find he used an inappropriate tone, and that his comments violated “professional conduct.”

The petition even suggests Comaroff’s tenure become a casualty.

But his lawyers warn the university about taking action based on “untested accusations.”

COVID patients to have electronic monitors slapped on them