So much for diplomatic engagement, eh? While the Biden administration negotiated a return to the 2015 Iran deal with Tehran, its IRGC plotted the assassination of former national security adviser John Bolton. The plot began in October of last year, according to the Department of Justice and CBS News:

An indictment against Shahram Poursafi, of Tehran, alleges that beginning in October 2021, he attempted to arrange Bolton’s murder, likely in retaliation for the killing of Qassem Soleimani, the head of the IRGC’s elite Quds Force who was killed by a U.S. airstrike in Iraq in January 2020.

Working on behalf of the Quds Force, Poursafi attempted to pay $300,000 to people in the U.S. for the murder, the Justice Department said. The department said there is no evidence that Poursafi has ever been to the U.S.

The indictment alleges that Poursafi and others in the IRGC plot attempted to find assassins for that $300K contract on Bolton’s head. Poursafi was willing to pay up to $15,000 for surveillance of Bolton, although apparently he preferred to transfer the money in Iran rather than the US, for obvious reasons.This person went to the FBI with the information at some point, becoming a “confidential human source” in the investigation.

After that, Poursafi tried to get the informant to find a hitman to do the contracted hit: 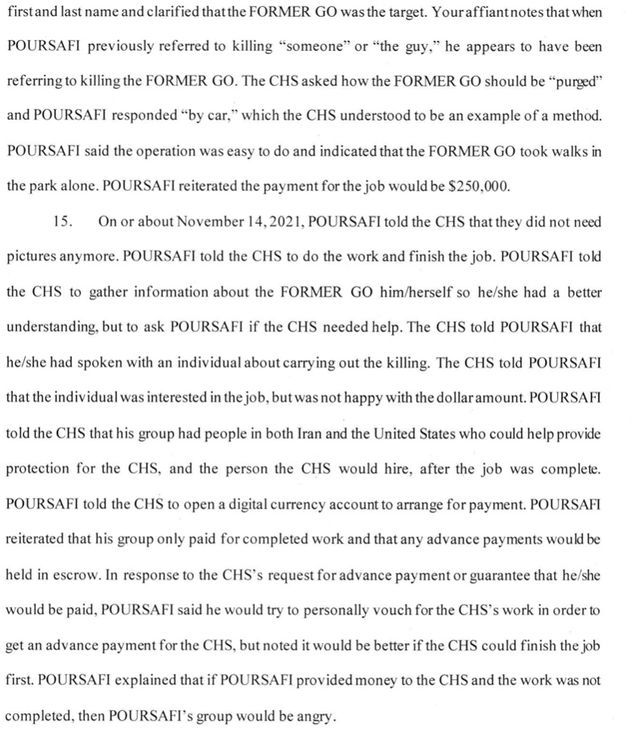 Needless to say, the amount of money involved makes it clear that Poursafi wasn’t just playing around with petty cash. This kind of money and the machinations employed to conduct this operation clearly indicates that the IRGC ran it.

Most of the action on Bolton took place between October 2021 and February 2022. What was taking place in negotiations with Iran after that point?

Biden: Hey, that inflation data is out of date because gas prices fell!

Pew: Come and see the credibility disconnect in the media — and media fact-checking