The two-tiered legal system keeps coming for Donald Trump, and he keeps fighting back — this time with video proof of prosecutorial bias. After the unprecedented raid on his Mar-a-Lago home on Monday, Trump is now in New York for depositions in a civil case against him. But the depositions won’t get far.

Shortly before the scheduled deposition Wednesday morning, Trump posted three videos on his Truth Social account that point the finger at one person: Letisha James. The New York attorney general ran for office on the platform that she’d get Donald Trump.

Later, after Trump arrived at James’s “plush office,” he issued a statement saying he would invoke his Fifth Amendment right to remain silent.

Trump posted the three videos on Wednesday to spotlight James, the person behind another legal “witch hunt” against him, currently underway in New York. James is shown repeatedly promising to “get” Trump as she was running for New York attorney general. “We’re gonna sue him, we’re gonna be a real pain in the ass,” she promised voters before being elected to office. In another video, she says, “what is fueling my soul is Trump.”

The videos are a mash-up of many times on the campaign trail where James promised to prosecute Trump for whatever she could dig up on him.

Fox News reports that “James’ office has been conducting a civil investigation into the Trump Organization to find out whether Trump and his company improperly inflated the value of assets on financial statements in order to obtain loans and tax benefits.” Among the properties James is going after are his residence at Trump Tower and “Trump’s estate Seven Springs in Westchester, [and] New York, 40 Wall Street.”

Trump posted on Truth Social from James’s office that he was “at the very plush, beautiful, and expensive A.G.’s office. Nice working conditions, as people are being murdered all over New York – and she spends her time and effort on trying to ‘get Trump.’”

Recommended: We’ve Got the Deep State on the Run. Here’s What Needs to Happen Next.

The former president also issued a statement on Truth Social about the depositions, the witch hunt, and invoking his 5th Amendment privilege.

Trump stated, “Letitia James opening campaigned on the policy of ‘Get and Destroy Trump.’ This political attack on me, my family, and my great company is her despicable attempt to fulfill that cynical, and very corrupt promise.” Later, he said she “colluded with others to carry out this phony, years-long crusade that wasted countless taxpayer dollars all in an effort to prop up her political career.” He said that “what Letitia James has tried to do in the last three years is a disgrace to the legal system.”

And then Trump delivered the knock-out punch: he’s invoking his Fifth Amendment privilege to stay silent.

“I once asked,” he wrote, “if you’re innocent why are you taking the Fifth Amendment? Now I know the answer to that question. When your family, your company, and all the people in your orbit have become targets of an unfounded, politically motivated Witch Hunt … you have no choice.” 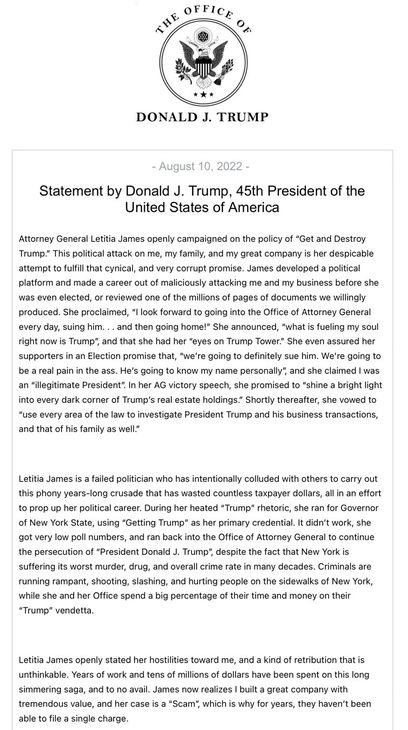 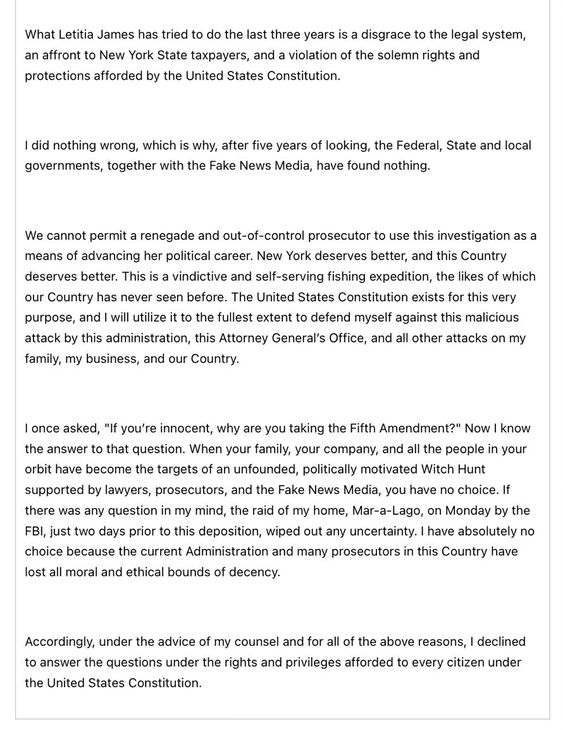 America is watching. As PJ Media reported, a poll by the Trafalgar Group this week showed that 80% of Americans believe there is a two-tiered system of justice; one for elites and one for people elites don’t like.

Trump said America is turning into a banana republic. Based on what the justice system is doing to him, he’s right.

The Morning Briefing: Tulsi Gabbard Is SO Close to Being Cool

CNN Claims It's Looking to Moderate After Ratings Plummet