Just how desperate are media outlets to press a Joe Biden Comeback narrative? The Hill might have set the outer marker for effort with this report today on the latest Reuters-Ipsos tracking poll. Their headline:

Bear in mind that this tracking poll has a margin of error of ±4%. That makes this “rise” nothing more than statistical noise.

To be fair, Reuters covered it almost identically, even while reporting that MoE:

U.S. President Joe Biden’s public approval rose this week to its highest level since early June following a string of legislative victories, according to a Reuters/Ipsos opinion poll completed on Tuesday.

The two-day national poll found that 40% of Americans approve of Biden’s job performance, a level of support that is historically low for a U.S. president.

But the recent upward turn in Biden’s approval rating – including gains in each of the last three weeks – could temper the concern among his Democrats that the party is poised to take a drubbing in the Nov. 8 midterm elections, when Republicans hope to seize control of the U.S. Congress.

It gets worse than that once The Hill starts explaining.

Only 12 percent of Republicans approved of Biden’s performance.

Biden’s approval rating in the poll hit its lowest point in May at 36 percent, and it has remained below 50 percent since August 2021, according to the poll.

In other words, the entire gain Biden has made over the past three months remains solidly within the MoE. And even that is only attributable to his own party feeling better about his performance.

This, by the way, is the bounce that Reuters and The Hill are selling: 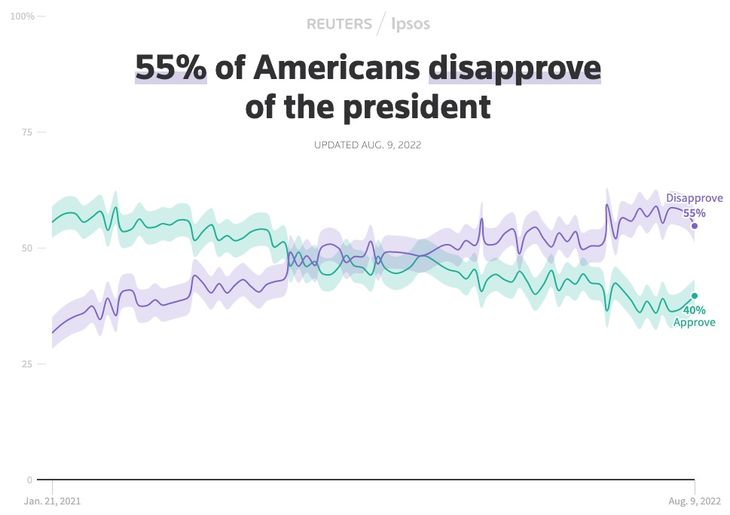 That’s hardly a bounce. It’s barely a return to the pre-Dobbs status quo. It doesn’t look much better in Reuters’ demos, even among those that would normally be favorable to a Democratic incumbent:

The most remarkable aspect of the graphs in these demos is that there isn’t much of a bump in any of those either. The only significant upward motion for Biden in Reuters’ poll is among Democrats, and even 21% of those disapprove of Biden.

There isn’t much evidence of a bump in the RCP aggregation either, even with this Reuters/Ipsos data added: 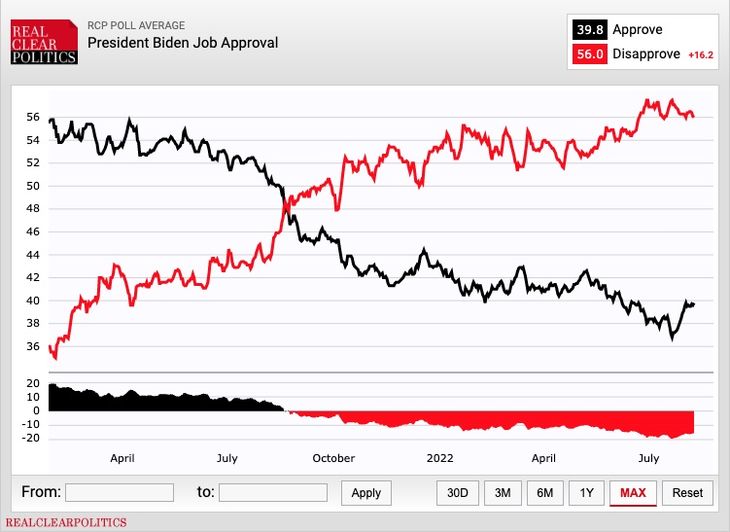 Biden’s still just a skosh below 40% approval and at 56% disapproval, a horrid number even by Biden standards over the past year. He’s bounced back slightly from a July floor, but even that upward motion appears to have dissipated. It got fueled in significant part by a surprising Rasmussen result this week that put Biden’s approval spread at single digits for the first time in months, 45/54. Otherwise, Biden lands below 40% in well over half of the most recent polls.

The only Biden comeback in evidence is in the media narratives that have gotten constructed around Schumer-Manchin deal, which Biden had little to do with anyway. It’s a sad effort to puff up Biden while blowing smoke up media consumers’ skirts.

Yikes! Doug Emhoff tells Democrats they must back Kamala if Biden doesn’t run in 2024

Gender drugs dangerous: Doc who helped get them approved