Donald Trump says he knows the documents the FBI took in the notorious Mar-a-Lago raid on Monday were declassified because he’s the one who declassified them.

Just the News reports that Trump had a “standing order” to declassify documents he would take to the White House residence to study after his Oval Office hours.

The very fact that these documents were present at Mar-a-Lago means they couldn’t have been classified,” the former president’s office stated. “As we can all relate to, everyone ends up having to bring home their work from time to time. American presidents are no different. President Trump, in order to prepare for work the next day, often took documents including classified documents from the Oval Office to the residence.

Trump said as much on his Truth Social account Saturday when he posted several messages about the documents:

Number one, it was all declassified. Number two, they didn’t need to “seize” anything. They could have had it anytime they wanted without playing politics and breaking into Mar-a-Lago. It was in secured storage, with an additional lock put on as per their request…

President Barack Hussein Obama kept 33 million pages of documents, much of them classified. How many of them pertained to nuclear? Word is, lots! 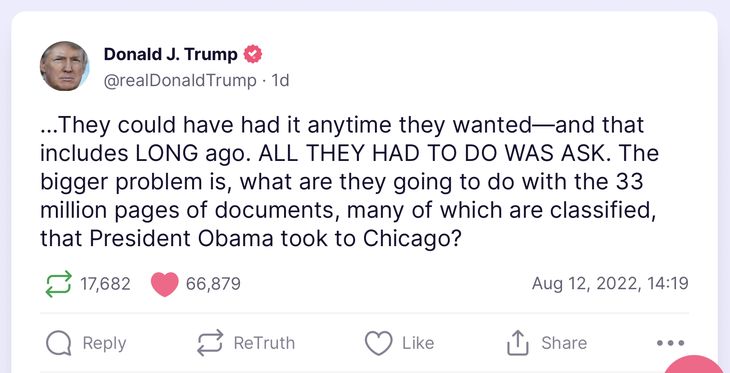 Civil rights attorney Mike Davis of the Constitutionalist non-profit Article III Project told Bloomberg that “it’s pretextual legal nonsense for the Biden Justice Department to pretend President Trump broke any criminal statute by taking 15 boxes of his records with him when he left.” As PJ Media reported, Davis says, “All Presidents take records when they leave. They don’t pack their own boxes. National Archives takes the position that almost everything is a “presidential record.” The federal government over-classifies almost everything.” And there’s the crux of the problem with the National Archives (NARA).

Still, never before has the DOJ raided a president’s home or offices to get documents for NARA. Indeed, Barbara McQuade, a former federal prosecutor and law professor at the University of Michigan law school, told Bloomberg that “even Nixon received a subpoena for his recordings.”

“I am not aware of any prior case where a search warrant was executed at the home of a former president,” she said.

Trump believes he’s supported by Bush and Obama-era executive orders detailing that a sitting president does not have to go through the stringent rules required for others to treat classified documents.

The president’s detractors in Congress, the DOJ, and the intelligence community are likely to contest the president’s arguments. But officials familiar with national security law said courts generally have held the president’s power to declassify is far-reaching and that the process for how that happens can be more happenstance, something the Bush and Obama executive orders from 2003 and 2009 made clear.

Obama’s executive order no. 13526, issued in 2009, laid out the stringent process all federal officials and agencies needed to follow for declassification, but explicitly exempted the sitting president and vice president from having to follow those procedures.

Trump is no longer a sitting president but has the security in place for the documents he claims to have declassified.

The president’s expansive latitude in handling documents appears to be why a DOJ unidentified source leaked to The Washington Post a story about Trump possessing documents about nuclear issues in an attempt to make it look like he was trafficking in government secrets.

The people who described some of the material that agents were seeking spoke on the condition of anonymity to discuss an ongoing investigation. They did not offer additional details about what type of information the agents were seeking, including whether it involved weapons belonging to the United States or some other nation. Nor did they say if such documents were recovered as part of the search.

The situation was so fraught about these “classified documents relating to nuclear weapons” that the FBI waited through the weekend to raid the Trump Mar-a-Lago resort.

Trump said on his Truth Social account that this claim was absurd:

“Nuclear weapons issue is a Hoax, just like Russia, Russia, Russia was a Hoax, two Impeachments were a Hoax, the Mueller investigation was a Hoax, and much more. Same sleazy people involved. Why wouldn’t the FBI allow the inspection of areas at Mar-a-Lago with our lawyer’s, or others, present. Made them wait outside in the heat, wouldn’t let them get even close – said “ABSOLUTELY NOT.” Planting information anyone? Reminds me of a Christofer Steele Dossier!”

He’s not the only one who thinks there’s something hinky going on.

Former Trump Administration Department of Defense official and former federal prosecutor Kash Patel, who investigated the Russia hoax, said he believes the feds were looking for “Russia gate” documents to destroy. The “Department of Politics” has a two-tiered system of justice, said Patel.

Related: Attorney: Trump Watched the Mar-a-Lago Raid as It Happened

Patel said, “DOJ and FBI – and vindictive librarians at NARA – continue to perpetuate the Russia hoax by ‘seizing’ documents that President Trump declassified and the American people need to see. … Bottom line, they never want you to see their corrupt Russia Gate documents and will [use] any and all power to keep them from the American people.”

The list of Washington insiders who were never raided for recklessly trafficking in classified material is distinguished and mostly Democrat. Disgraced and fired FBI Director James Comey intentionally leaked classified documents to the news media — his notes of meetings with Trump — which were government property.  He wasn’t raided.

Hillary Clinton, who, unlike Trump, had no control over classifying or declassifying documents, consistently trafficked in top secret and classified material — Top Secret Sensitive Compartmented Information (TS/SCI) — outside of the State Department office on her homebrew server. At least one of the Left’s trusted national security heroes, former CIA Acting Director Michael Morell, claimed Clinton’s server was almost certainly compromised and surveilled by the world’s top spy agencies. Clinton later destroyed documents that were under preservation orders. She wasn’t raided.

As First Lady, Hillary Clinton also hid law firm documents that pertained to a federal investigation into her and Bill Clinton’s Whitewater real estate imbroglio. Miraculously, the papers “suddenly appeared in a room accessible only to the Clinton family, their guests and personal and custodial staff” at the White House.

The Morning Briefing: Fetterman’s Wife Is Giving off a Creepy Jill Biden Vibe

Beyond Gross: Fake Meat Company Cited for Mold and ‘Dirty Conditions’ at Factory