It’s the Bruce Reinhart meme that broke a million progressive hearts and brought forth gales of laughter from normal, happy people.

@WhatIMemeToSay is a right-leaning “meme creator, digital art creator, and USMC veteran,” according to his Twitter profile. He also got sent to Twitter jail for what might be his most delightful creation yet, involving Jeffrey Epstein, Ghislaine Maxwell, and Epstein attorney-turned-magistrate-judge Reinhart.

The merry meme-maker borrowed a provocative photo of Epstein and Maxwell, apparently from Epstein’s private jet, and had some fun with them at Reinhart’s expense.

Here’s one of the originals, used as state evidence in Maxwell’s trial.

A foot massage from a partly-disrobed, busty underling seems like exactly the kind of thing Epstein would be into.

Seems like? IS. We have the photos, after all.

But thanks to Twitter and his big, swirling ego, we also have this photo of Reinhart in his natural habitat. 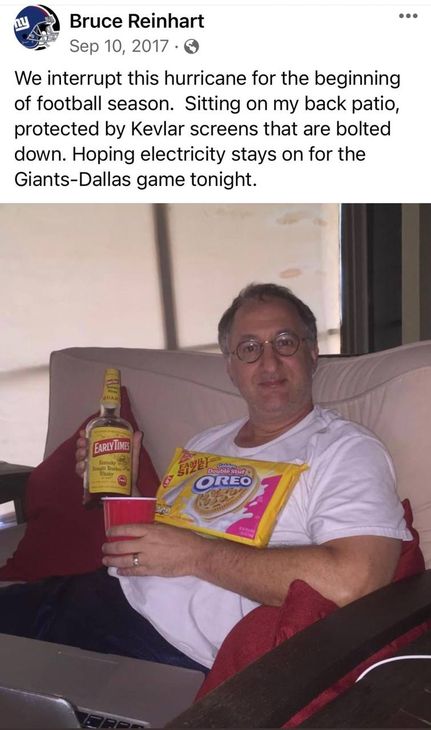 Bad weather, a bottle of Early Times, and a bag of Oreos ain’t exactly a private jet with a willing busty underling, but some judges gotta take what they can get.

But if you combine the two, like @WhatIMemeToSay did, you get comedy gold. 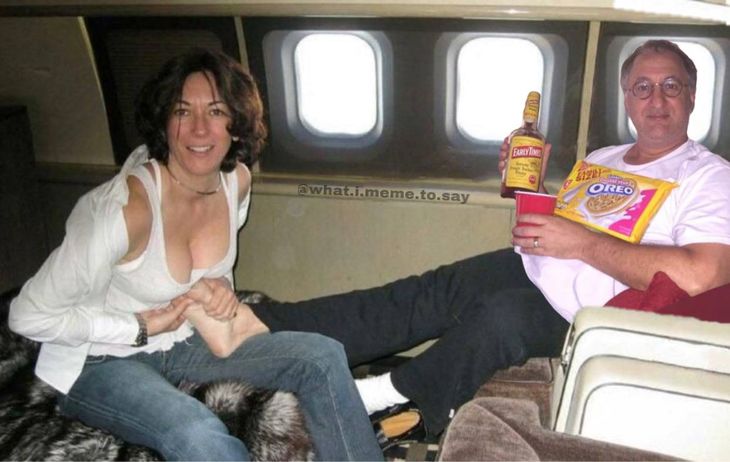 Man, it’s a wonder @WhatIMemeToSay didn’t get arrested and suicided in his jail cell.

If you don’t love the Reinhart meme — in a totally cringey way, of course — then you must have had your sense of humor surgically removed.

I shouldn’t have to say this, but this meme is funny because before he became a judge and issued what looks like an unconstitutionally broad search warrant against a former U.S. president, Reinhart quit his job as an Epstein prosecutor in order to help get Epstein a sweetheart plea deal for charges involving underage sex trafficking.

This is real Deep State-level stuff, exposed by a simple meme.

A raunchy meme is the absolute least of anything Reinhart deserves. Somewhere in between “Reinhart meme” and “tar and feathers” would be justice. “Impeachment followed by trial for conspiracy to deprive civil rights” sounds about right to me.

But then, the Post Millennial reported, Brian Kilmeade ran it on Fox News while guest-hosting for Tucker Carlson on Friday night.

Ana Navarro called the Reinhart meme “disgusting misinformation,” so you know it’s anything but. The only possible harm is to Reinhart’s ego, and as I like to say, the toes of the self-important were made for stepping on.

Not everybody can afford to offend the Progressive Social Media Gods, and I wish I were among the lucky few. We can’t even share this column far and wide on Facebook because they’ll “fact check” it and then throttle all of PJ Media, just because we reprinted the forbidden Reinhart meme.

It’s a shame, too, because using humor to smite the mighty is an American tradition older than the United States — and social media is a much more effective way of sharing those witty critiques than passing around a pamphlet ever was.

That’s why the progressives work so hard to make sure we can’t.

It’s also why I’m happy to have a writing gig outside the social media behemoths, where I can share things like the Reinhart meme without fear of getting canceled.

That kind of safety is why PJ Media launched our VIP content almost three years ago — a place to share with you privately what we aren’t allowed to share elsewhere.

If that sounds like the kind of thing you’d like to support, we’d love to have you on board.

You can join the fight here — and use my VODKAPUNDIT promo code for a lovely 25% discount.

Recommended: VIDEO: Is Kamala Harris Talking About Space or From There?