Representatives for Justice League star told Variety in a statement: ‘Having recently gone through a time of intense crisis, I now understand that I am suffering complex mental health issues and have begun ongoing treatment.’

The statement continued: ‘I want to apologize to everyone that I have alarmed and upset with my past behavior. I am committed to doing the necessary work to get back to a healthy, safe and productive stage in my life.’

The Variety report goes on to mention that the actor’s behavior has been worrying the friend’s stars and Warner Bros., the studio behind the DC Comics movie franchise.

The Flash, starring Miller as the titular character, is set to be released in theaters on June 23, 2023. The movie features Michael Keaton and Ben Affleck both playing versions of Bruce Wayne and Batman.

As recently last spring, Miller was still reshooting scenes for the movie, according to the Hollywood Reporter. 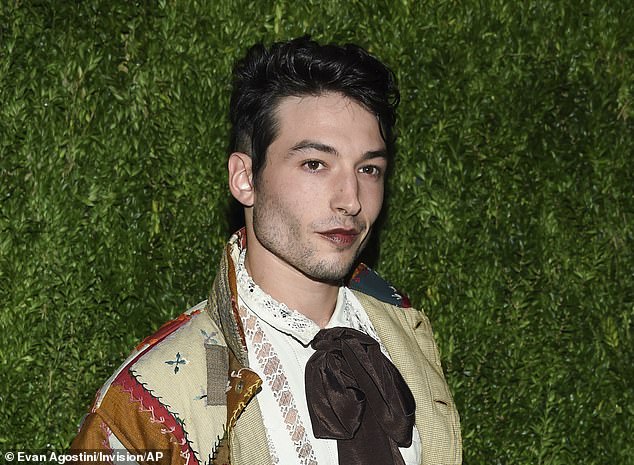 A rep for Miller said: ‘Having recently gone through a time of intense crisis, I now understand that I am suffering complex mental health issues and have begun ongoing treatment’

Earlier in August, Miller was arrested and charged with felony burglary after police claim the actor broke into an area home and stole bottles of liquor in May.

The future of The Flash franchise has been potentially muddied by Miller’s controversies, with their most recent arrest becoming the third time the actor was arrested this years.

Vermont State Police said they received a complaint that Miller had burglarized an empty home in early May.

Investigators reviewed surveillance footage of the area and took statements from witnesses before charging the actor. 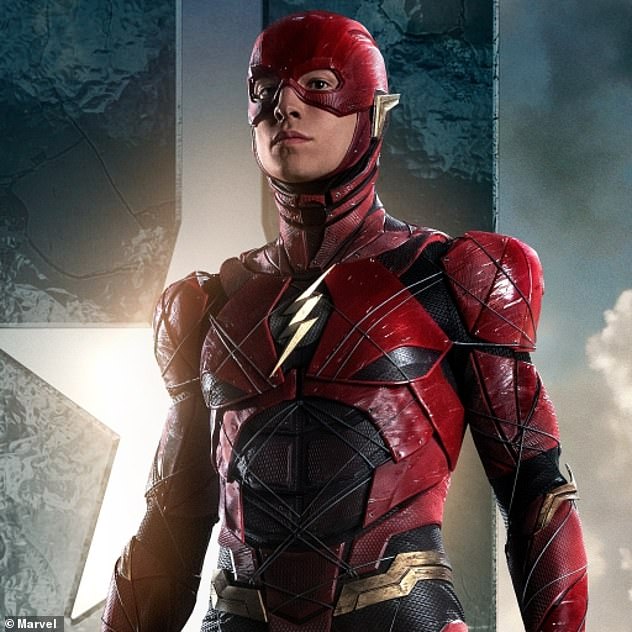 Miller, a non-binary actor, played The Flash in the DC Cinematic Universe. He’s pictured in character on a poster for the 2017 movie Justice League

Rolling Stone previously reported in June that the Fantastic Beasts star had a 25-year-old mother and three young children living on their farm, where firearms were reportedly left lying around.

One person interviewed for the story claimed that a one-year-old on Miller’s property — which is allegedly an unlicensed cannabis farm — had been found with a stray bullet in their mouth.

Miller has been the subject of numerous controversies in recent months, and they have been accused of disturbing and violent behavior going back to at least 2020.

That year, a video circulated that allegedly showed the actor choking a woman while at a bar in Reykjavik, Iceland.

A source told Variety the incident took place after ‘pushy fans’ approached Miller and the actor lost their temper. 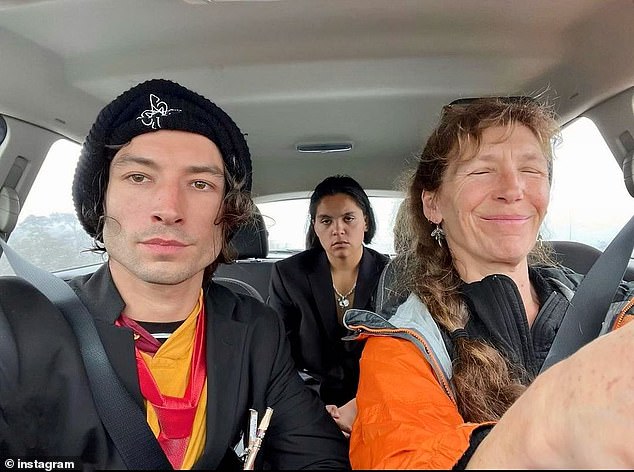 Miller has been accused of ‘grooming’ and ‘brainwashing’ Tokata Iron Eyes, 18 (backseat), who is a member of the Standing Rock Sioux tribe. They are pictured together in a car

A woman claimed to Variety that in March 2020, Miller became belligerent and harassed her in her Berlin apartment after she told them that they could not smoke indoors.

‘That just set them off,’ said the woman, who was identified only by her first name, Nadia. ‘I asked them to leave about 20 times, maybe more. They started insulting me. I’m a “transphobic piece of s***.” I’m a “Nazi.”

‘It became so, so stressful for me. They were going around my house, looking at everything, touching everything, spreading tobacco leaves on the floor. It felt disgusting and very intrusive.’

She was only able to get Miller to leave after a half-hour confrontation when she finally called the police, and the incident left her feeling ‘unsafe.’

It was reported last month that the investigation had been dropped due to Miller no longer being in the country.

Miller also made headlines in January when they posted a now-deleted video on Instagram threatening members of the Ku Klux Klan operating in Beulaville, North Carolina. 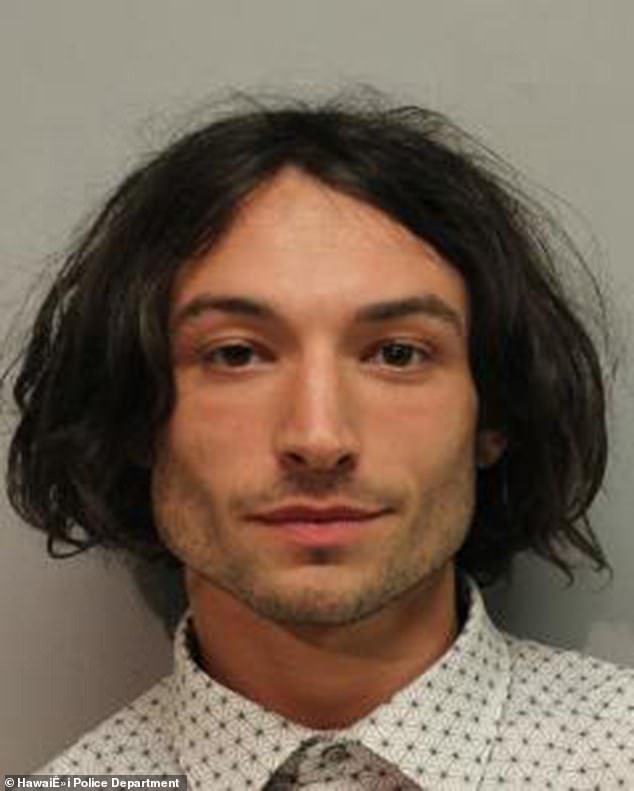 Miller was first arrested this year on March 28, for disorderly conduct at a bar in Hawaii

Miller was seen telling members of the Klan to kill themselves with their own guns, otherwise ‘we’ll do it for you if that’s what you want.’

The troubled actor has been arrested twice in Hawaii this year, once for disorderly conduct and harassment and another time for second-degree assault.

Miller was arrested In March at the Margarita Village bar  for allegedly harassing a number of patrons with belligerent behavior and was charged with disorderly conduct and harassment.

The incident started when Miller was reportedly hurling obscenities at a 23-year-old woman singing karaoke. The actor also tried to grab the microphone from her mid-song.

Then later on the same night, Miller lunged at a 32-year-old man who was playing darts at the bar. Police were eventually called in to deal with the out-of-control star.

Bodycam footage of the encounter with law shows the furious actor complaining that they were the real victim of assault, before demanding to know the police officers’ full names and badge numbers.

‘I’ve been assaulted for NFT crypto art,’ Ezra yelled. ‘What’s your name and your badge number?’

Miller was referring to NFTs – digital images or videos which can be sold as pieces of artwork in their original formats. 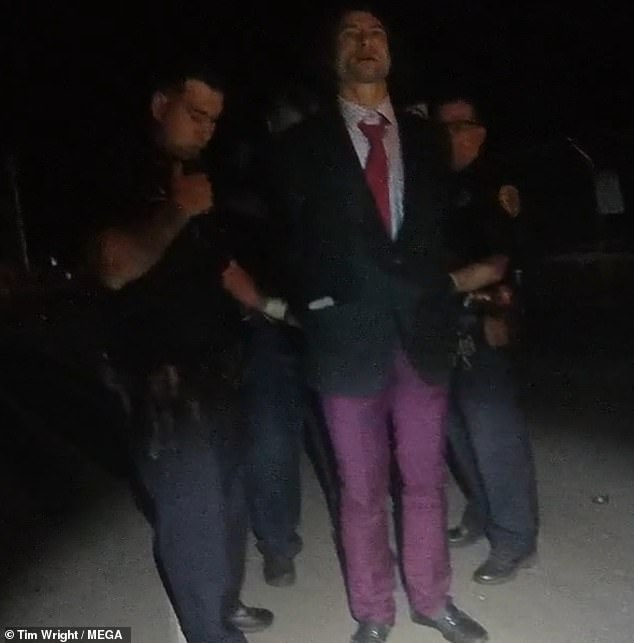 Miller is shown being arrested in Hilo, Hawaii, on March 28 after allegedly spitting in someone’s face and pulling a microphone away from another person as they tried to sing karaoke

‘Tell me your name and your badge number! Full name!

Weeks after that incident, Miller faced a second arrest in Hawaii over claims the actor threw a chair at a woman’s head after the star refused to leave her home when asked.

The woman suffered a scar on her forehead, and Miller was charged with second-degree assault.

The We Need To Talk About Kevin actor was also recently accused of sheltering the teenage runaway Tokata Iron Eyes, whose parents filed a restraining order against the star.

The actor also allegedly tried to get into bed with the teen — a member of the Standing Rock Sioux tribe — during a trip to London when Iron Eyes was just 14, DailyMail.com reported.

Tokata’s mother Dr. Sara Jumping Eagle said she and her lawyer husband Chase Iron Eyes have ‘no idea’ where 18-year-old is — after lodging legal papers for a protection order against Miller on behalf of their activist child.

The mother said she last saw Tokata in Santa Monica on May 29 in a harrowing street encounter after she and Chase flew from their home in North Dakota following a tip that the teen was in California with the Flash star.

Miller and Tokata jumped in a taxi after being confronted and sped off, she said.

Unable to hold back tears, Sara told DailyMail.com in an exclusive interview: ‘I would say to her now what I said to her then as she was going down the road away from me: “I love you and that I want you to be safe.”‘

The parents claim in a lawsuit that the actor plied their underage child with drugs including LSD and disrupted their Massachusetts private schooling to such an extent that they dropped out from Bard College at Simon’s Rock in December.

When they flew to Miller’s home in Stamford, Vermont, in January to retrieve Tokata, they allegedly found bruises on their child’s body. Tokata also no longer had a driver’s license, car keys or a bank card.