Democrats took the lead in FiveThirtyEight’s generic ballot average a few days ago but RealClearPolitics remained a stalwart holdout — barely. After months of the GOP leading comfortably in their average, once by nearly five points in April, the gap between the parties shrank suddenly over the last few weeks. As recently as July 24, Republicans led by 2.5 points. But falling gas prices and the deus ex machina of Build Back Better passing against all odds caused Democratic support to surge, shrinking the Republican lead to a tenth of a point earlier this week.

Today Dems finally took the lead. The last time they held a lead was November 12, 2021.

And the weirdest part? It was a poll from Republican-friendly Trafalgar that appears to have tipped the balance.

Here’s the Trafalgar data that gave Democrats the tiny nudge they needed:

If it seems weird that a poll showing Republicans up five points would somehow benefit Democrats in the polling average, bear in mind that Trafalgar’s last poll before this one showed the GOP up eight. Even they’re seeing movement towards Team Blue lately.

Does this mean the House majority is in trouble? No, not really. FiveThirtyEight still has the GOP as 78 percent favorites to flip it. Typically, to hold serve in Congress, Democrats need to lead by four or five points on the generic ballot. In fact, Trafalgar may show the “true” state of the likely midterm electorate right now in having Republicans up five, as that would roughly square with other pollsters seeing the ballot tied or Dems slightly ahead. The point in tracking these generic ballot shifts isn’t to suggest that the House is gone but rather to warn that a shift really is in progress and could become dicey a month from now if it continues.

There are three standard explanations for the trend, two of which I’ve already mentioned. (Between falling gas prices and Build Back Better, I’d guess 80 percent of the momentum is being driven by gas prices.) As for the third, here’s an interesting data point from TargetSmart: 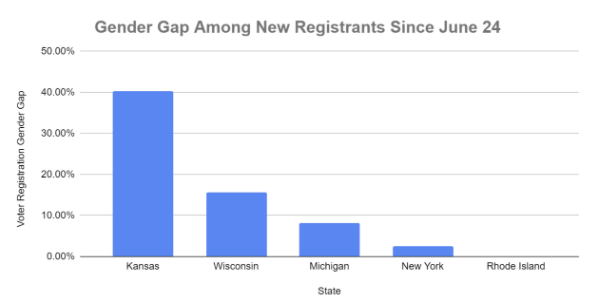 That’s some gender gap in Kansas, coincidentally the site of the big abortion-rights referendum that pro-choicers won a few weeks ago. Wisconsin also happens to be a flashpoint on abortion policy, as the two parties are battling in court over whether an 1849 statute banning abortion is in effect now that Roe has been repealed. Something similar is happening in Michigan, where Dobbs may or may not have resurrected a long dormant abortion ban. Compare the gender gaps in new registrations in those states to the gaps in New York and Rhode Island, where there isn’t any raging debate over abortion. Abortion politics might be padding the Democratic rolls in key battlegrounds by convincing women who were otherwise tuned out of politics to register.

Which is why I’ve said several times in the last few weeks that if Dems could put an abortion referendum on the ballot in all 50 states this fall, they’d eagerly do it. It’s a turnout engine for pro-choice voters who otherwise wouldn’t bother. Heck, even red-pilled Joe Rogan sounds like a liberal again:

Thank you @SethDillon for standing for the human right to life—without exception—on @joerogan‘s show today.@joerogan, let’s talk. I think we would find a lot of common ground on protecting families, fighting censorship, and pursuing a meaningful life. pic.twitter.com/StlfgNxARo

The good news *and* bad news for the GOP is that there’s little Biden and his party can do at this point to meaningfully affect the midterm environment. BBB is in the books and no other major legislation will pass before fall. Inflation and gas prices will do what they do. Whether there’s a major backlash at the polls to the end of Roe probably depends less on Democrats than it does on Republicans at the state level as they mull whether to restrict the practice before November. Simply put, Democrats don’t have much control over their electoral fate at this point. They’re prisoners of events.

That’s the good news for Republicans. The bad news is that the GOP is also a prisoner to events with respect to the economy and inflation, and the trends in those metrics have been good lately for the ruling party. We just got a massive jobs report; inflation finally stopped growing month-over-month; and gas is under four bucks a gallon again. If that continues, what does the generic ballot look like in November? Probably still not blue enough to prevent the House from flipping, I’d guess — but maybe blue enough to give Kevin McCarthy a much narrower majority than he expected.

Then again, is that really a problem in a cultish party? Would any Republican dare vote no on a bill that has Trump’s support knowing that doing so might cause that bill to tank? McCarthy can probably govern with a majority of one seat, at least on matters where Trump’s position is clear.

I’ll leave you with this as a reminder that it would be very embarrassing to underperform against a party that has this person as one of its top leaders.

Everybody who has worked in an office has worked with somebody like this: pic.twitter.com/jYcci2UGUc