Shortly after the FBI raid on Mar-a-Lago, something interesting happened. I started hearing that Twitter was flagging articles I had written discussing the raid. Users attempting to share the link were shown a dialogue box that said “Warning: this link may be unsafe” with the following explanation:

The link you are trying to access has been identified by Twitter or our partners as being potentially spammy or unsafe, in accordance with Twitter’s URL Policy. This link could fall into any of the below categories:

The first article I was alerted to being censored was called “Another Huge Red Flag in the Trump Raid Story,” which questioned why the Wall Street Journal reported that they reviewed some of the documents from Mar-a-Lago when those documents were supposedly so sensitive that the FBI had to conduct an armed raid. Why would agents have given anyone in the media access to these documents if they were deemed sensitive, even though they were under lock-and-key at Mar-a-Lago? It made no sense.

The next article that Twitter tried to stop people from sharing on their platform was called “Is This Proof the Mar-a-Lago Raid Was a Fishing Expedition?” This article highlighted how the FBI took documents that were protected by attorney-client privilege and executive privilege. As we know, Trump has repeatedly asserted executive privilege in the Democrats’ January 6 witch hunt investigation, so it seemed rather convenient that the FBI’s raid collected information that was of interest to the January 6 Committee.

Oh, but Twitter wasn’t done blocking my articles. Yet another article called “The Biden Administration Is Acting Guilty of a Coverup After Mar-a-Lago Raid” was also flagged by Twitter. Gee, why did they flag that one? 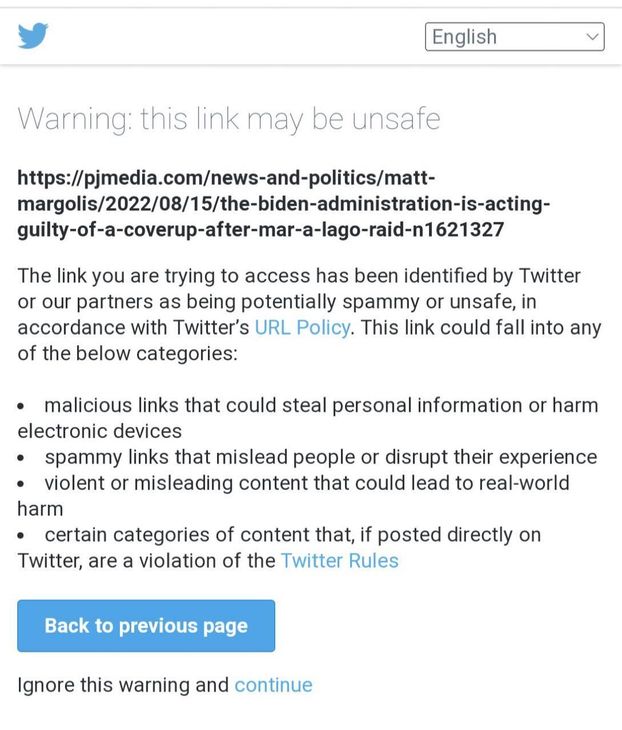 The blatant censorship of these articles even caught the attention of the Media Research Center.

This is what Big Tech does. It restricts information damaging to the left, while lies and even death threats against conservatives are free to be posted and shared without restriction. Earlier this year, I was banned from Twitter for daring to speak the truth about transgenderism.

We need to keep calling out Big Tech when it tries to silence conservative voices. With your help, we can keep putting pressure on Big Tech. You can do this by becoming a VIP member. Use promo code BIGTECH for a 25% discount on a new PJ Media VIP subscription. Become our partner in the battle against the left’s censorship. With your help, we can win!

While VIP members have access to a wealth of exclusive PJ Media content, VIP Gold subscribers get even more. With VIP Gold, members can access all of the VIP content across the Townhall Media family (Townhall, RedState, PJ Media, and more) along with live chats with their favorites like VodkaPundit and Stephen Kruiser — a nearly $300 value.

Gavin Newsom’s In-Laws Fled California During the Pandemic, but That’s Not the Best Part

If Democracy Is ‘Threatened’ by MAGA Republicans, Why Are Democrats Boosting Them in GOP Primaries?