NPR published the results of a new poll which found the majority of Americans consider what’s happening at the southern border to be an “invasion.” NPR is quick to point out that some of the claims made about migrants at the border are not true:

More than half of Americans say there’s an “invasion” at the southern border, according to a new NPR/Ipsos poll, part of a broader decline in support for immigrants overall.

The poll found that a large number of Americans, including big majorities of Republicans, blame migrants for a rise in deaths from fentanyl — even though there’s no evidence directly linking them to the problem.

It’s true that fentanyl overdose deaths are up in recent years, and that much of the U.S. fentanyl supply is smuggled through the border.

But experts say the vast majority of fentanyl and other illegal drugs are smuggled through official ports of entry, hidden in large trucks and passenger vehicles, while a relatively small amount is smuggled by cartels across the border between those ports.

Republicans are also more likely to say immigrants are likely to rely on public assistance. The article notes that immigrants are mostly barred from federal assistance, which is true. Of course that doesn’t mean tens of thousands of immigrants aren’t relying on some kind of assistance. We’ve recently seen the mayors of New York and Washington, DC claim that the migrants bused from Texas are using up city resources and clogging up homeless shelters. So clearly there is some impact on the public when a million people come over the border in a year.

In any case, NPR has arguably buried the lede here, which is that a plurality of Democrats agree with this characterization. Here’s the chart showing the results.

It’s a bit hard to read at this size but it shows that 42% of Democrats believe the word “invasion” completely or somewhat applies in this situation. That’s significant more than the 34% who say it’s not true. But again, NPR doesn’t mention this result at all in the text of the story.

Other results in the poll show declining support for giving legal status to Dreamers (people brought to the country as children) and increased support for a border wall. 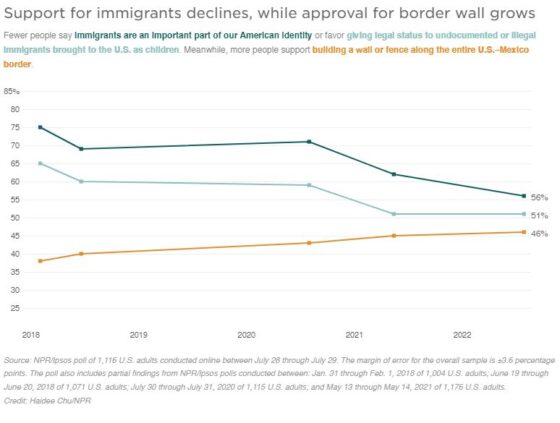 Again, sorry for the sizing but this shows support for Dreamers has gone from 65% in Feb. 2018 down to 51% last month. Support for building a wall along the border has gone from 38% up to 48% over the same time span.

All of this is a predictable reaction to far too many people coming over the border too quickly, creating a massive backlog of cases in our immigration system which will take years to clear. And when it is cleared, most of the people will have deemed to be what they are, economic migrants looking for a better life, not genuine candidates for asylum under our laws. Whether they understand all the details or not, a majority of Americans accurately perceive that our system is being gamed by a massive influx of people. And much of the blame for the current situation falls on President Biden.

Joe Biden came into office on the promise that he would restore competent management to the White House instead of daily Twitter fights, but I think that chart above shows people don’t see it when it comes to managing the border crisis. What they see is an administration that has set a historic record for the number of new migrants who were arrested last year and is going to surpass that record by a substantial amount this year.

Meanwhile, Biden has lied (he claimed the influx was seasonal) and refused to visit the border himself (claiming, falsely, that he’d been there before). That lack of competence and engagement is leading people to believe the situation is out of control and that Biden isn’t up to the job of doing anything about it. If he wants to turn that around, he’s going to need to go to the border and explain his plan for dealing with the situation.

Finally, I don’t believe “invasion” is the right word for what’s happening at the border. I think a better phrase would be institutional failure. But the debate over what word to use is itself a distraction, just like the debate over whether or not “critical race theory” is taught in schools. The real issue isn’t the label but the thing itself. In this case, what matters is that we have two million migrants per year showing up at the border, a number that surpasses the population of quite a few US states, and the Biden administration has no long-term plan to deal with it.

If not a FOIA, how DID Politico get those sexual assault and service records on Jennifer-Ruth Green?

Do dogs in San Francisco get stoned from eating human poop?