Voters Moving to the Right Across Almost Every Demographic, Says Massive Survey

Morning Consult has reported five years’ worth of data from over 8.6 million participants that shows a trend of America’s registered voters moving steadily to the ideological right.

“The left is losing the battle for the minds of the American electorate, Morning Consult research shows, with voters decreasingly identifying as liberal in recent years,” writes Morning Consult political reporter Eli Yokley. “But that doesn’t mean the country is lurching to the right.”

Yokley then makes an effort to pretend the trend isn’t what it looks like: “Instead, an increase in the share of Americans who identify as moderate, or who are uncertain about where exactly they stand on the ideological spectrum, reveals a growing and electorally decisive center that is discontented with either side’s extremes.”

Except that the percentage of voters who identify as conservative actually increased slightly, while only those who call themselves liberal decreased. Call me crazy but that just sounds like Democrats are turning away from far-left ideology to become more moderate:

The share of the electorate who identifies as “very liberal,” “liberal” or “somewhat liberal” on a seven-point scale has dropped over the past five years, from 34% to 27%, according to extensive annual Morning Consult survey research conducted among more than 8.6 million U.S. voters since 2017.

Meanwhile, “Even as Democratic voters drift toward the middle, the data shows that the Republican Party’s adherents are shifting further to the right — and it’s happening quickly,” writes Yokley.

Or to put it another way, the whole country is moving in a rightward direction.

This trend is concurrent with the largest group of people consistently falling into the conservative camp — 39% in 2022, from 38% in 2017. Meanwhile, the liberal cadre has shrunk from a high of 34% in 2017 to a mere 27% as of now. Moderates and folks who don’t know what they are round out the results at 27% five years ago and 35% today.

Also, the intensity is all ours on the right:

Over the same time period in which the share of Democrats identifying as liberal dropped from 60% to 55%, the share of Republicans who said they were conservative increased from 70% to 77%. What’s more, Republican voters (32%) are far more likely to identify as “very conservative” than Democrats (19%) are to say they’re “very liberal.” 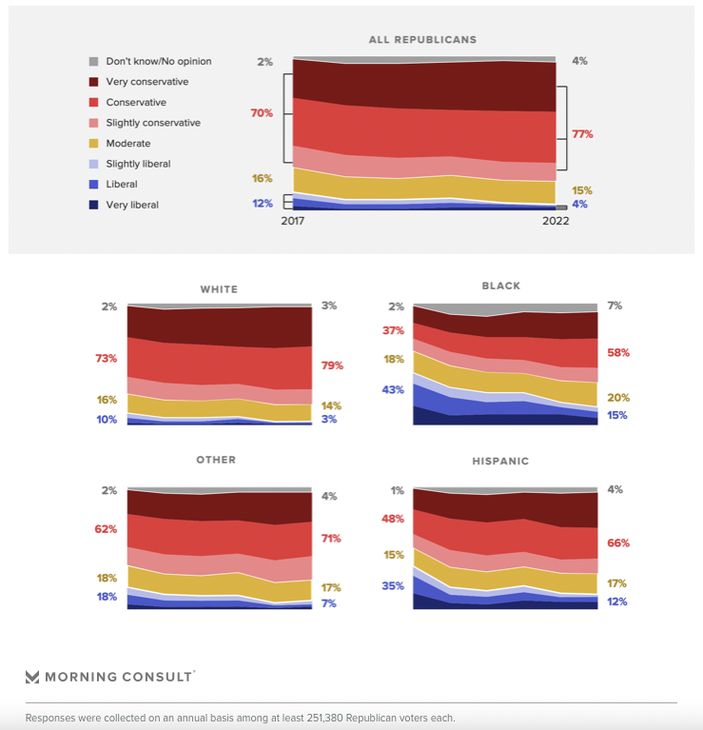 Here’s a screenshot of the overall poll results with the 2022 breakdown, but I recommend visiting the original because it’s interactive and fun, if you’re into that sort of thing: 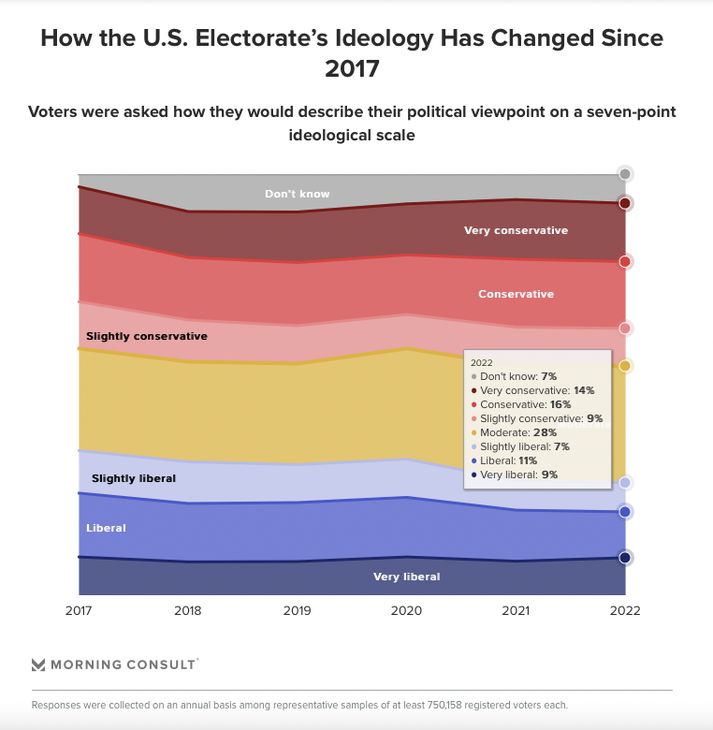 I’ll tell you what else is fun: watching minority demographics that Democrats take for granted every election fleeing the hard left by double digits over the past five years:

Related: The MSM Suddenly Decides Elections Can Be Stolen… But Only by Republicans

Of course, it’s possible that Democrats aren’t truly becoming more moderate; they’re just staying where they always were, shaking their heads in disbelief as their party gallops leftward in the throes of a virulent woke infection. That would also explain why Republicans don’t automatically walk away with most elections, even though conservatives are consistently the largest cohort year after year.

Be that as it may, my takeaway is that the Democrat party is becoming unrecognizable even to its own adherents.

Why We Can't Have a Nice Independence Day

Michelle Obama Says She Didn’t Wear Her Hair in Braids in the White House – Can You Guess Why Not?