There’s a bit of a “Let’s go, Brandon” vibe coming from the ol’ job approval lately, and not in an ironic way.

That’s from FiveThirtyEight’s polling average. His numbers are still bad but not historically bad like they were a month ago. He’s inching up towards “bad, but not bad enough to fuel a major red wave” levels of respectability.

This new one from Gallup, which hasn’t been incorporated into the average yet, will drive his numbers further upward. He stands at 44 percent today, his best number since the Afghanistan withdrawal fiasco of August 2021. Care to guess which partisan group is fueling his surge? Here’s a hint: Biden’s had a string of successful results lately, and one group more than the other two might reasonably be expected to respond to good results more so than to ideology.

Yep, it’s indies who are taking a brighter view of Biden these days. A little.

A poll that shows him rising from a putrid 31 percent among independents last month to a merely grim 40 percent this month isn’t going to end up on the wall of the Biden Presidential Library but it’s heading towards territory where he won’t be a major liability for Democrats downballot.

Or am I wrong? Compare his 44 percent rating to how other presidents with polling in the same range before the midterms saw their parties do on Election Day: 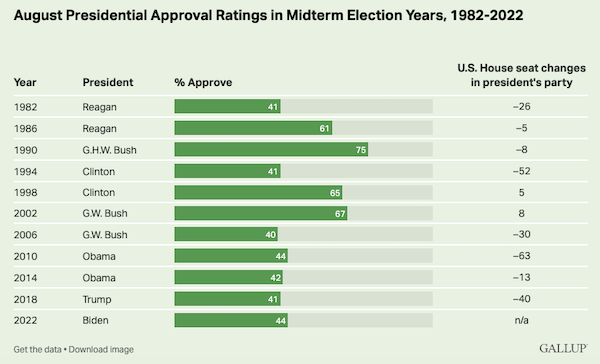 But that was then and this is now. Republicans already picked some of the low-hanging fruit in swing districts by gaining seats in 2020. Between that, remorseless partisan gerrymandering, and the population self-sorting by ideology over the past decade, a 44 percent approval rating might mean something closer to a 20-seat pick-up for the out-party than a 60-seat one.

I’ve listed the factors driving Biden’s and the Dems’ improving numbers lately ad nauseam — the Dobbs backlash, declining gas prices, a great jobs report, possibly cooling inflation, the Zawahiri strike, and the passage of Joe Manchin’s skinnier version of Build Back Better. But there may be another factor I’ve overlooked. Could Trump’s return to the heart of the news cycle be contributing to sunnier views of Biden? Sleepy Joe got elected president in 2020 not because he dazzled voters but because he promised a contrast with Trump. Having hourly Trump drama on TV again this month due to a wholly avoidable classified-documents scandal might be jogging voters’ memories: “Oh, right, that’s why I liked Biden two years ago.”

YouGov has new polling out tonight on the Mar-a-Lago search. As expected, Republicans are firmly in Trump’s corner. And as expected, a majority of the country is not. Not a great posture for the frontrunner for the 2024 nomination:

According to a new Yahoo News/YouGov poll, a majority of Republicans and GOP-leaning independents now prefer Trump (54%) over “someone else” (34%) for the 2024 nomination. Right before the Mar-a-Lago search, those numbers were 47% and 38%, respectively…

Yet at the same time, a full 56% of Americans say Trump should not be “allowed to serve as president again in the future” if he is “found guilty of mishandling highly classified documents” — which is precisely what the FBI is investigating him for. Only 26% say Trump should be permitted to assume the presidency again in that scenario…

YouGov has Biden leading him 46/42 in a hypothetical 2024 race. The guy’s turning 80 in a few months, he’s presided over the worst inflation in 40 years, and Trump still can’t do better than the low 40s against him. And because Republican voters care more about spiting the libs than actually winning elections, they’re now more likely to prefer him in the next primary following the Mar-a-Lago search than they were before.

We get the nominees we deserve.

One last point about Gallup: The poll was conducted before Biden announced his awful new debt forgiveness program for college grads, which means it’s a “clean” look at where he stands at the final moment before public reaction to the policy begins to start showing up in polling data. I said yesterday that it seems insane to me for Biden to push a risky policy with high backlash potential like this one at a moment when he and his party have begun to recover in approval. If working-class voters turn on him over it, that could stop Democratic momentum dead in its tracks. So treat today’s Gallup numbers as a benchmark. If he’s down again from 44 percent next month we’ll have a pretty good guess as to why.

I’ll leave you with DeSantis, who was on-message today. Trump finally got around to denouncing the new debt forgiveness plan this afternoon too after spending yesterday focused on more important things, like indulging his grudges against Mitch McConnell and his wife.

Portland families leaving the city to escape homelessness and crime