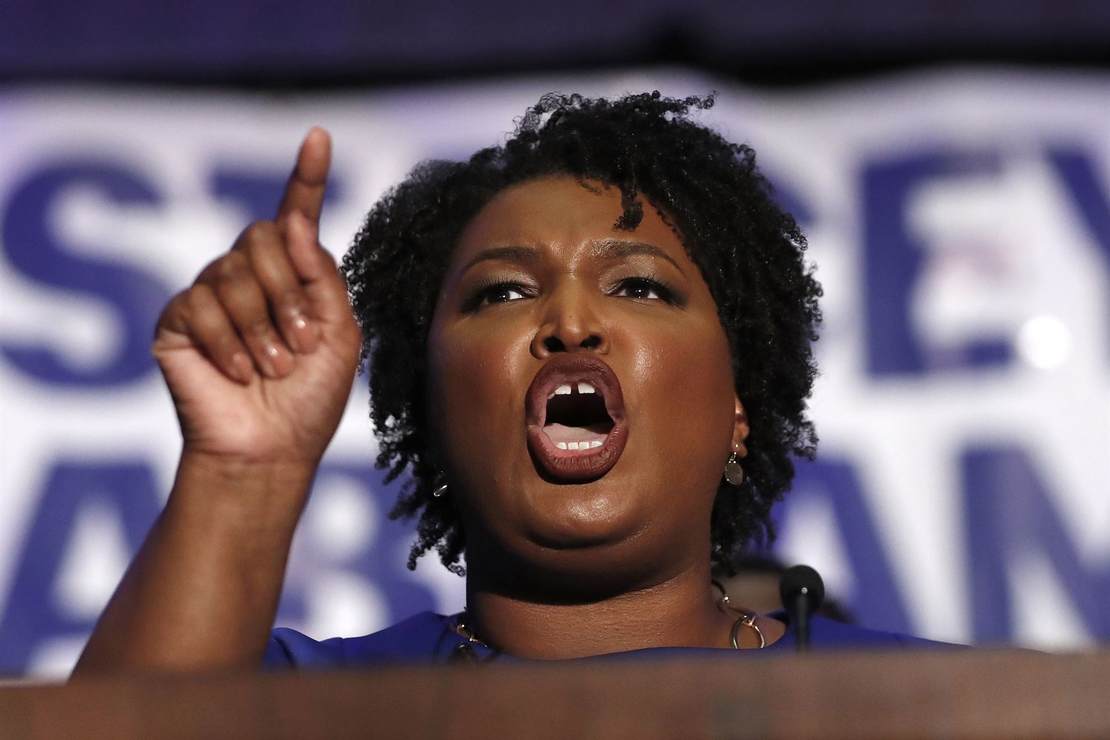 Teen Vogue wants its readers to fight like hell for the election of Stacey Abrams as governor of Georgia. Or they want their readers to get loud about it. Both bits of advise are being used to promote an op-ed in the publication that hopes to bring attention to the Georgia gubernatorial race. Abrams is lagging behind the incumbent, Governor Brian Kemp.

This race is a rematch of the 2018 race. Then Secretary of State Brian Kemp ran against state legislator Stacey Abrams in the gubernatorial race. She lost by 1.4%. Instead of gracefully conceding the race when the votes were counted, she refused to do so. She blamed the loss on voter suppression and conceding would acknowledge “an action is right, true or proper” and “as a woman of conscience and faith, I cannot concede that.” In December 2021, she told CNN that Kemp “won under the rules of the game at the time, but the game was rigged against the voters of Georgia.” Who knows what will happen when she loses a second time to Brian Kemp? Real Clear Politics has Kemp up 4.6%. The latest Emerson Poll, for example, has Kemp up by 4 points, and the latest Trafalgar Group poll has Kemp up by 7 points. Kemp is up over Abrams in all polling. She has not led in a poll throughout the race.

Unless pollsters are horribly wrong – a possibility in any race – Kemp will win re-election, the question is by how much? Given the current political atmosphere and the hot button issue of abortion on the table, it will likely be a close race. After Labor Day, look for Hollywood and other prominent Democrats to come to the aid of Abrams. She’s a superstar in the Democrat Party and an effective political organizer and fundraiser so they will be invested in her to win.

It’s already begun at Teen Vogue. An op-ed written by Jameelah Nasheed urges the readers to “get loud” and to “fight like hell.” The phrase “fight like hell,” does not appear in the op-ed but does on the site’s main page. On Nasheed’s personal page, the phrase is featured as the original title “It’s Time to Fight Like Hell for Stacey Abrams” is listed. You get the picture. It’s a call to action for teens whether they are of voting age or not. Teen Vogue is not about teen fashion and make-up like teen magazines used to be. Teen Vogue is a political publication that promotes progressive issues.

The op-ed credits Stacey Abrams for turning Georgia blue in the 2020 election. It’s fair to give her that credit as she proved herself successful in organizing voters and raising millions of dollars for Democrats. Trump played a role in the state losing two Republican senators and gaining two Democrat senators instead. He depressed the Republican vote and for that he should not be forgiven. Hopefully, Warnock will be defeated by Walker in November and Georgia will have one Republican senator going into 2023. It’s time for Republicans to take back the Senate. But, I digress. Gubernatorial races are crucial, too.

Now here we are, less than two years later, and Abrams is running for governor again. This time around, the world knows her name, but the posts of support appear to be fewer and farther between. Abrams helped “save our democracy,” but will the beneficiaries of that heroism show up for her when she needs them the most? She is behind in the polls, but on the ground in Georgia, where I live, it’s far too quiet. Now is the time to get loud for Stacey Abrams.

In a July survey from the Atlanta Journal-Constitution, governor Brian Kemp was several points ahead of Abrams. In that same survey, senator Raphael Warnock (D-GA) was ahead of his Republican candidate. For anyone paying attention to Georgia’s upcoming midterm election, this should be alarming. And for clarity, everyone should be paying attention to this upcoming midterm election. Abrams’s advocacy in such a crucial swing state amounted to showing up for every person in this country during the 2020 election. Now, who’s going to show up for her? As Kemp continues his reign of terror for people who want bodily autonomy, who want sensible and safe gun laws, and who want to live in a state that won’t throw away opportunities for economic growth because of its leader’s oppressive personal beliefs, it’s especially important to recognize that this election will directly impact the lives of millions of people in Georgia and beyond.

The rhetoric from Democrats this election cycle is extreme. Everyone has to save democracy. Governor Kemp governs with a reign of terror. It’s all hyperbole meant to scare Democrats to get out and vote. Democracy is alive and well, thank you very much. Our system of government works, just as it did in 2018 when Abrams lost a close race.

Abortion is the main focus of the op-ed. The author says she is “terrified of pregnancy — wanted or unwanted.” May I suggest birth control? It’s legal in all states. Or does she advocate abortion as birth control? She was careful to use the progressive language commonly accepted now – people with uteruses, for example. Women. They are called women.

The author writes about businesses talking about moving their headquarters out of Georgia over abortion laws or gun laws. I’ve seen quotes from CEOs saying they are considering leaving Georgia but so far I haven’t seen any confirmation that any businesses have actually left for a pro-abortion state. Most companies just say they will cover travel expenses for employees if that is necessary. Funny, I didn’t see any mention of Stacey’s Abrams support of the Major League Baseball’s decision to move the All-Star game out of Georgia over the phony election law debate in 2021. Abrams applauded that decision before she denied her connection to it once stories began to be published about the economic hardships coming from that decision. Lots of small businesses lost money when the game was moved out of Atlanta and to Colorado. Nice work, Stacey.

As I mentioned above, I expect Kemp to win this race. We’ll see how sore loser Abrams handles it this time. The hyperbole will be lit.

Showdown: China threatens to “resolutely crack down” on protesters as uprising gains momentum