Or so you’d think from The Hill headline:

It’s not so much an “accusation” in the ad, as a soft-spoken statement of fact. Let’s Fisk this write-up some more.

“Democrats use race to divide us,” the ad begins, before showing clips of Democrats like Georgia gubernatorial candidate Stacey Abrams, Vice President Harris, President Biden and Walker talking about race.

The ad plays a clip, for example, of Biden saying “You ain’t Black,” followed by a clip of Warnock saying “America has a preexisting condition. It’s called racism.”

“Senator Warnock believes America is a bad country full of racist people. I believe we’re a great country full of generous people. Warnock wants to divide us. I want to bring us together,” Walker, who is Black, concludes.

Wait, WHUT? So, the sin is not in accusation, as much as letting prominent Democrats – including current Georgian Democratic candidates – spell out how THEY feel, in THEIR OWN WORDS…before Walker genially notes he doesn’t feel like that at all.

And, HEY! BY THE WAY (this is where Walker sticks the shiv in and TWISTS), America’s a pretty great place.

Man. Divisive. I understand the caterwauling.

We’re all about facts here, so I don’t want my interpretation to color your impression. Check out Walker’s pugnacious tone your ownself. It’ll set you right off. (Ignore the friendly smile. Underhanded as all get out.)

Wasn’t that GREAT?! Just cool, calm, and collected. No shrieking, no grievance flags, no litany of slights, real or imagined. Just a simple statement of they said this and here is where I am.

Where Walker “is” right now is also what’s causing this shrieking eel fit of election vapors on the part of national Democrats. It wasn’t supposed to be this close. Walker is as flawed a HUMAN candidate as one could possibly find, for all his fame and fortune on the field. But he has one thing going for him that the Rev Warnock does not – he is “LIKABLE.” He is approachable. He comes across as the guy next door who’d bring a brewski over while you were grilling in the shadow of your garage door. Or ask you while you were under your hood if you needed another size wrench. That’s the vibe. As opposed to the classic Marvel villain-looking Warnock (to include his name), with his off-putting arrogance and swirling rumors of domestic…um…upset.

And it. IS. CLOSE. According to the Real Clear Politics average, Walker has pulled from as far back as 10-13 points down to within 1. ONE POINT! AY DIOS MIO!! 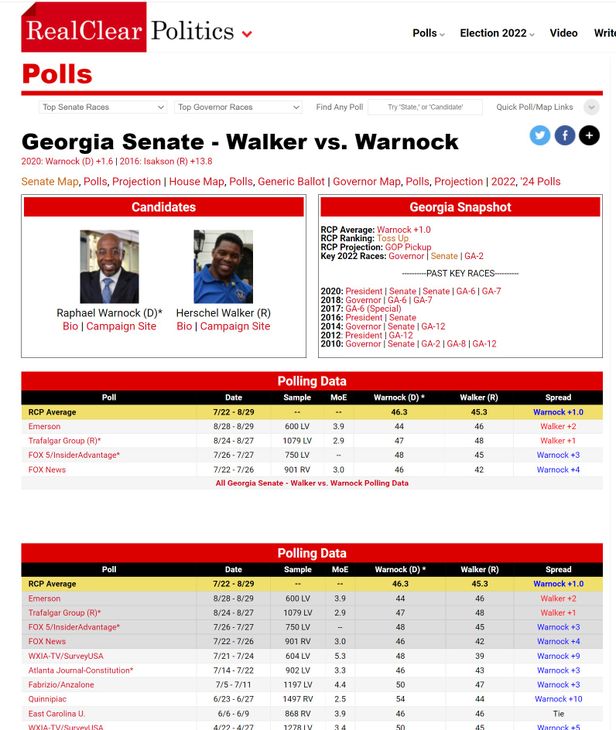 National media is fretting enough that, JUST 3 DAYS AGO, Politico Magazine ran a fawning slobber job on Warnock so over the top they completely forgot to mention – as they hammered Walker for “allegations of domestic violence” – that there’s a PRET-TEE GRAPHIC POLICE VIDEO with the good Rev’s ex-wife alleging for the camera (Atlanta Journal Constitution) he’d just done that very thing, YO.

I’m including the piece’s title with the quote I’ve pulled. It’s so gag-tastic, that you have to see it, and you won’t if you don’t click through.

‘There’s Never Been Anybody Like Him in the United States Senate’
Raphael Warnock won his seat running as an activist preacher. To keep it he’ll have to persuade voters he’s the rare senator who actually gets stuff done.

…Neither has there ever been a race like the race he’s running right now. Warnock, of course, is facing Herschel Walker, the former football player and University of Georgia star — not only pitting two Black men for a seat in the Senate, itself a matchup that is vanishingly rare, but two Black men who present a contrast that’s almost impossibly stark. Warnock — the first Black senator from Georgia and the first Black Democrat in the Senate from the South, and not just a pastor but the pastoral heir of Martin Luther King Jr. at Atlanta’s Ebenezer Baptist Church — has made his life’s work a response to systemic racism. Walker has all but denied racism’s existence. Warnock as an orator arguably has few peers. Walker at times struggles to make sense. And while Warnock has some scuffs to his sheen — a contentious divorce, an arrest from some 20 years back, controversial snippets from pulpits and pages from his decades of scholarship — Walker’s catalogue of flaws includes lies, allegations of domestic violence and a history of a personality disorder that made him consider killing a man and also risk killing himself. Polls of late suggest Warnock has a small lead, but a polarized and anxious national mood, an uncertain economic environment and a midterm cycle that appears to favor the GOP have made a toss-up out of a contest that shouldn’t be close. And the stakes are high. It could catapult Warnock into another echelon of national importance. It could decide the balance of power in the Senate. It could help determine the country’s very tenor and direction for a generation to come…

I guess when you’re desperately flinging poo at the wall, fling away? No one’s going to read THAT who didn’t want to believe it anyway, God help them.

…only the very next day to accuse everyone who heard them of, “HOW DARE YOU!” when the tale of the tape is played.

I love this ad. The tone is quiet perfection.

Will China and India finally condemn the Russian invasion?