One would think, facing what could be a catastrophic railway strike in as few as seven days, one would think you could find a quote – or two – from the TRANSPORTATION Secretary to use in a piece about it. But we’re talking Pete Buttigieg – whose only real qualifications for the job were he 1) once immensely enjoyed a train ride and 2) is a married gay man – so my efforts were in vain. Was I surprised?

Not really. He’s been MIA since the paychecks started.

I was VERY surprised by a clip from last week of Energy Secretary Jennifer Granholm that I just saw, which is saying a lot because she really can spew the nonsense. For instance, her suggestion to low-income folks less than a month ago to “…weatherize and, oh, by the way! Solar panels are 30% off!” (Ed covered that Marie Antionette moment) scored a -5 on the “empathy/helpful/subject matter expert speaks” ratings system.

In the wake of all that has passed this summer, and all the possible woe yet to come, she outdid even herself.

“California is in the lead and can show the rest of the nation how it is done.”

“I love the fact that California is unabashedly bold about energy policy … it’s the canary in the coal mine.”

Does she know that the canary died??? pic.twitter.com/hr6J3JrNtD

Kerpen’s so right – that canary’s goose is cooked. In a longer puff piece filmed at an electric truck factory and mechanic training facility, she assures a reporter who asks if the grid is ready for all these electric vehicles they’re mandating:

“The nation’s grid has got to be ready. We have to basically double the size of the nation’s electric grid with clean energy.”

The studio interviewer asks her right out of the box – “How confident are you we’ll be able to keep the lights on this [hot freaking] Labor Day?”

“Yeah, first of all, you are fortunate you have an incredible what is known as the “California ISO, and they are organizing the energy market for California. And they are so good.”

And she starts blithering about how they’ve asked the federal government for “waivers,” etc, so they can get “anything they need.”

So, how’d that work out? About like we expected. 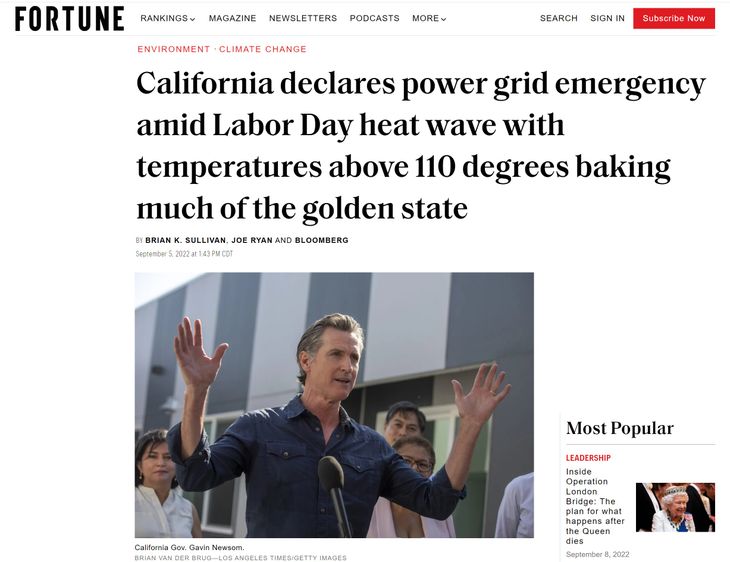 In fact, the very day that Granholm was touring the wonder truck factory and expounding on how rock solid the state was as an energy leader, a reporter from CalMatters was warning everyone to hold onto their hats

…But today marks the third straight day of statewide Flex Alerts asking Californians to voluntarily conserve energy from 4 to 9 p.m. And, with temperatures expected to remain 10 to 20 degrees above normal into early next week and more calls for energy conservation expected through Labor Day — in addition to other possible “emergency actions” — the threat is far from over.

Exacerbating the grid’s fragility: raging Southern California wildfires that knocked out transmission lines on Wednesday, resulting in a temporary loss of about 700 megawatts. And more blazes could be on the way: The U.S. Forest Service warned residents Thursday to take precautions during Labor Day weekend — when California’s national forests see the highest number of visitors — by being aware of fire restrictions and being careful with campfires…

In every facet of daily life, we are expected to ignore the evidence our lying eyes present, and nod in agreement with these utter fools. I know every administration has its problem children, but holy moly – not all in one place, at one time. I don’t know if there’s ever been such a uniquely unqualified group sitting in a circle around a president…like, ever.

Senate Dem incumbents to Biden: Don't stand so close to me

Cheney on Election Day: This isn’t the end, it’s the beginning

Charlie Crist called Gov. DeSantis a ‘dictator’ but the governor’s response turned that on its head