One “troubling clue” has emerged from Joe Biden’s executive order  for “all” of the government to address election issues, and that’s that activists working on the scheme have included representatives of the ACLU, the Campaign Legal Center,  Demos, the SPLC, BLM, the Leadership Conference of Civil Rights and others, all of which are far-left to extreme-left organizations.

According to a commentary from Chief Political Correspondent Byron York in the Washington Examiner that’s about the only detail that has been made available to the American public, who will be voting on midterm elections in just weeks.

That “troubling clue,” as York described it, “would not reassure anyone hoping that the Justice Department is working in a scrupulously nonpartisan way. But, of course, we don’t really know what the department is doing because the administration is keeping it a secret.”

TRENDING: If only you were as humble as I am!

It ordered an “all of government” scheme, meaning every federal bureau, agency and office would be involved.

He claimed it was to increase voter registration but York said it focused on “groups that have historically been part of the Democratic coalition.”

The evidence was from Biden’s own words, because he said, “Black voters and other voters of color have faced discriminatory policies and other obstacles that disproportionately affect their communities. These voters remain more likely to face long lines at the polls and are disproportionately burdened by voter identification laws and limited opportunities to vote by mail.” 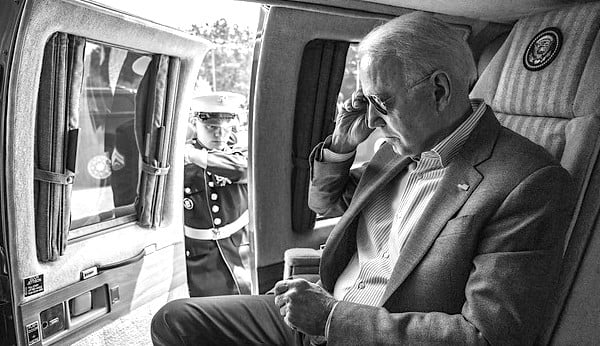 Is the fix in for Democrats to steal elections?

York explained it was simple “boilerplate,” as Democrats, despite data proving it was a myth, still claimed “voter suppression” at every turn.

It was at that time that two measures in Congress, to give the federal government control of elections, were failing.

Biden’s order was vague, filled with “platitudes,” according to York.

But what would it actually do? wondered Republicans suspicious of Democrats in general and Biden specifically.

Biden’s direction was for the heads of all agencies to send the White House their “strategic plan” to affect elections.

And, York reported, that’s just about where the information stops.

It’s because the Foundation for Government Accountability sent a Freedom of Information Act request to the Justice Department asking for documents showing how the department is complying with Biden’s order.

But there was no response. Not a single document.

Then in court, the DOJ said it would not release any “plan” information.

Eventually 15 pages of information were identified as responsive, and they were turned over, blacked out.

Emails were turned over. Blacked out.

An “agenda” was provided. Blacked out.

“Remember that the main concern of the Foundation for Government Accountability is that the Biden administration is using the power of the federal government for partisan political purposes to influence elections. There are also fears that the administration might be taking on a federal role in elections that the Constitution leaves to the states,” York noted.

“The American people deserve to know if the Biden administration’s unprecedented action is fair and non-partisan, or if it is designed to help one political party over the other,” Tarren Bragdon, head of the foundation, said in a statement. “Why are they ignoring public record requests for strategic plans on federal voter registration efforts? Why are they treating these documents like they are classified information dealing with nuclear weapons? Midterms are approaching, and the DOJ’s failure to disclose information raises troubling issues. They need to reveal these public documents to keep our elections fair.”

For 25 years, WND has boldly brought you the news that really matters. If you  appreciate our Christian journalists and their uniquely truthful reporting and analysis, please help us by becoming a  WND Insider!

Content created by the WND News Center is available for re-publication without  charge to any eligible news publisher that can provide a large audience. For licensing opportunities of our original content, please contact [email protected].

They love the cover-up: Biden’s HHS wants mask mandates back

Dershowitz warns Dems if they win fight over privilege, they lose