So much for the second iteration of “inflation’s over!” Today’s consumer price index report shows year-on-year inflation still roaring at 8.3%, thanks in part to soaring food costs, which offset a plateau on gasoline prices.

However, even without food and energy, inflation picked up steam last month, as core CPI rose back above six percent year-on-year, and 0.6% month-on-month:

The Consumer Price Index for All Urban Consumers (CPI-U) rose 0.1 percent in August on a seasonally adjusted basis after being unchanged in July, the U.S. Bureau of Labor Statistics reported today. Over the last 12 months, the all items index increased 8.3 percent before seasonal adjustment.

Increases in the shelter, food, and medical care indexes were the largest of many contributors to the broad-based monthly all items increase. These increases were mostly offset by a 10.6-percent decline in the gasoline index. The food index continued to rise, increasing 0.8 percent over the month as the food at home index rose 0.7 percent. The energy index fell 5.0 percent over the month as the gasoline index declined, but the electricity and natural gas indexes increased.

The index for all items less food and energy rose 0.6 percent in August, a larger increase than in July. The indexes for shelter, medical care, household furnishings and operations, new vehicles, motor vehicle insurance, and education were among those that increased over the month. There were some indexes that declined in August, including those for airline fares, communication, and used cars and trucks.

Last month, the White House repeatedly claimed that Joe Biden had achieved “zero” inflation based on a single month-on-month reading. That claim just got wiped out, especially with core CPI. Almost everything except gas prices are rapidly rising, which pushed the core CPI reading to nearly its highest mark in 40-plus years:

We’ll get back to the medical costs in a second. Apparently, this came as a surprise to the Washington Post. In their morning e-mail, their preview of the CPI had the headline “Inflation likely fell again in August, but there’s a long way to go.” Shortly after the Bureau of Labor Statistics report came out, the Post retitled its essay, “Inflation persists as prices rose again in August compared to July.”

Never go the full White House. That’s even good advice for the White House itself, which planned to celebrate the so-called “Inflation Reduction Act” later today:

Today, thousands of supporters from across the country are expected at the White House as President Biden stages a celebration of the Inflation Reduction Act, a sprawling new law that aims to lower prescription drug costs, address global warming, raise taxes on some billion-dollar corporations and reduce the federal deficit. Biden and fellow Democrats are trying to promote the bill in advance of the November midterm elections, citing it as evidence that their party can get important things done in Washington.

Hours ahead of the event, the federal government is scheduled to release the consumer price index for August, offering a snapshot of the state of inflation. Both parties are eager to spin the numbers, with Biden arguing that he is trying to rein in inflation, while Republicans counter that it remains unacceptably high.

Er … oops. Even the limited inflation impact that Biden and his team claimed to get from the IRA, especially in medical costs, turned out to do nothing except perhaps make things worse.  After having cheered themselves for a solid month on the claim that Biden and Democrats had finally acted to curb inflation, today’s report will leave a lot of egg on their faces. It certainly should deflate their self-congratulatory event at the White House.

Economists had been expecting headline inflation to fall 0.1% and core to increase 0.3%, according to Dow Jones estimates. The respective year-over-year estimates were for 8% and 6% gains.

Energy prices fell 5% for the month, led by a 10.6% slide in the gasoline index. However, those declines were offset by increases elsewhere. …

Markets slumped following the news, with futures tied to the Dow Jones Industrial Average down nearly 350 points after being higher earlier.

And this is with a roughly 10% decrease at the pump. Imagine what will happen when gas prices begin to rise, as Janet Yellen predicted this weekend. We will see even more escalation in inflation, which will further expose the “Inflation Reduction Act” as nothing more than a bait-and-switch, with Biden using inflation to pull the wool over the eyes of voters.

Update: CBS tried claiming that inflation “slowed” in August. One look at the BLS chart shows how silly that claim is:

First, inflation compounds, so any inflation is by definition an increase — and at these rates, an acceleration. Second, the rate of core-CPI inflation didn’t slow, it got faster in August.

Next, let’s take a look at Table A and the changes month-on-month in each category: 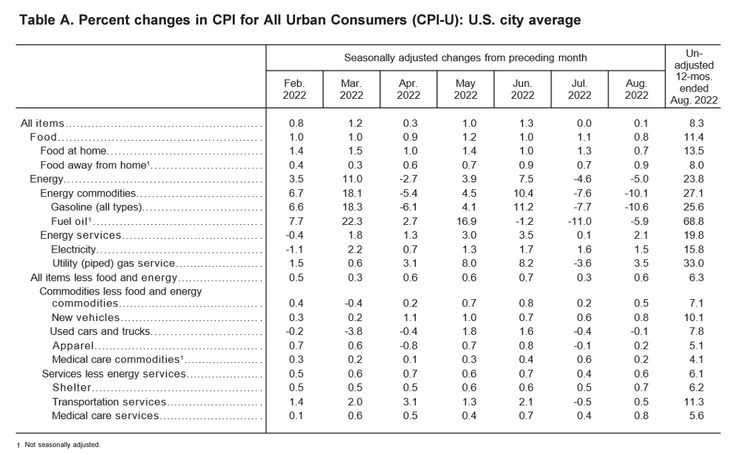 Other than energy, the only category where prices decreased was in used cars and trucks, and only barely at -0.1%. Every other category went up, and except apparel and medical care commodities, they went up by 0.5% or more in August.

We should talk about the Space Force’s new official song