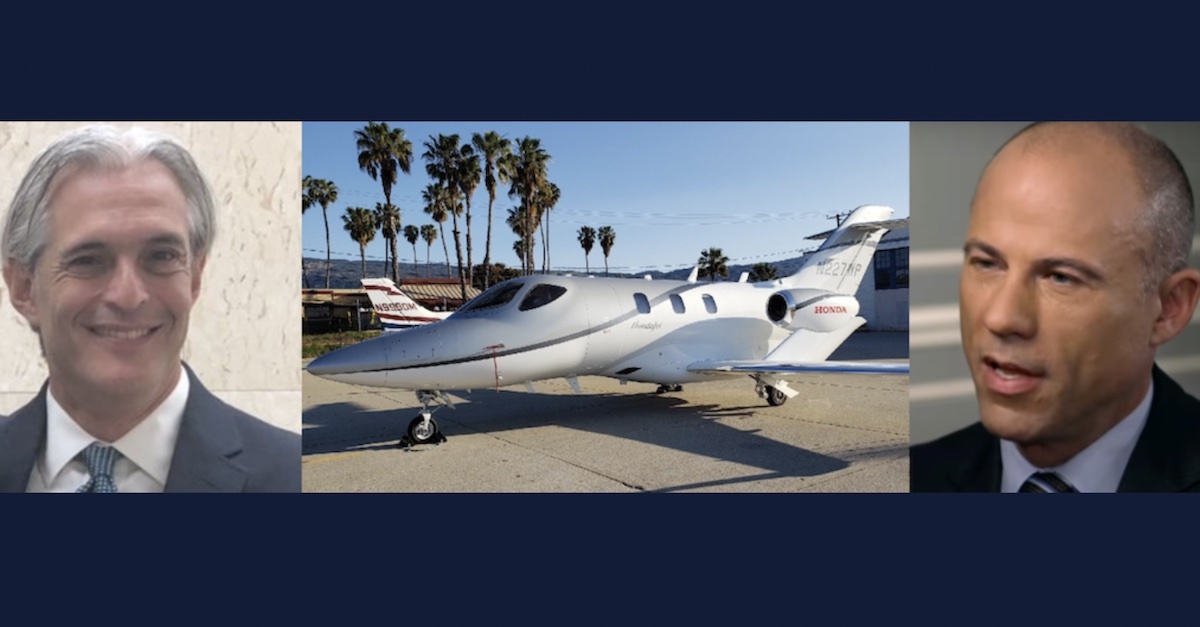 Michael Avenatti’s former law partner says a jet seized by federal authorities in 2019 should be used to help pay the $15 million owed to him by Avenatti and his bankrupt law firm.

Jason Frank is the first to claim an interest in the aircraft under an order from Senior U.S. District Judge James V. Selna that authorized its forfeiture as part of Avenatti’s upcoming sentence for wire fraud and tax crimes in the Central District of California.

Avenatti, who’s currently imprisoned on Terminal Island near Long Beach, agreed to the forfeiture, but Selna’s preliminary order allows for others to petition him for a stake in the jet.

Frank has long sought money from Avenatti for a broken partnership agreement at Eagan Avenatti LLP, where Frank worked from 2013 to 2016.

Avenatti agreed in March 2018 to pay Frank $4.85 million as part of the firm’s bankruptcy. But he didn’t make the two payments as scheduled, so Frank obtained a $10 million judgment against the firm in U.S. Bankruptcy Court, then sued Avenatti personally in Los Angeles County Superior Court for breach of contract, seeking $4.85 million.

A judge in LA issued a $4.85 million judgment against Avenatti the same day another judge down the freeway in Orange County Superior Court evicted his law firm from its ocean-view high-rise in Newport Beach because the firm hadn’t paid its $52,235 monthly rent in four months. Avenatti didn’t attend either hearing: He was on the East Coast talking with Democrats and journalists about a possible bid for the U.S. presidency.

But as Avenatti’s presidential hopes faded, his debt to Frank only grew through accrued interest. It also allowed Frank and his counsel and current law partner Andrew Stolper, who also worked with Avenatti, to subpoena Avenatti’s bank records and question him about apparent client embezzlement in public judgment debtor examinations, one of which was attended by an Internal Revenue Service agent who was a lead investigator in his California criminal case.

In his 2021 trial, Avenatti repeatedly referenced Frank’s debt collection efforts and Stolper’s status as a former federal prosecutor who is friends with the lead trial prosecutor, Assistant U.S. Attorney Brett Sagel, though the federal investigation originated with the IRS because it concerned Avenatti’s not paying taxes related to his Tully’s Coffee investment venture. Prosecutors asked Judge Selna to prohibit Avenatti from referencing Stolper in his retrial, but Selna never ruled on the motion because Avenatti pleaded guilty.

Frank and Stolper are partners at the law firm Frank Sims & Stolper LLP in Irvine, California, with another ex-Avenatti partner, Scott Sims. Stolper declined to comment when reached by Law&Crime on Wednesday.

Federal agents seized the jet in April 2019, surprising its co-owner, Avenatti’s former client William Parrish, at an airport in Santa Barbara. The men bought the jet in 2017 for approximately $4.3 million. As established in his California client theft case, Avenatti paid for his portion using $2.5 million he’d stolen from client Alexis Gardner’s settlement with her ex-boyfriend, NBA player Hassan Whiteside.

Parrish has not staked a claim in the jet forfeiture, but his lawyers have said they are considering their options. Frank’s petition emphasizes that the seizure occurred after he’d obtained secured liens on Eagan Avenatti and Avenatti’s property “including all property purchased with EA and/or Avenatti funds.”

Selna declared a mistrial in August 2021 after prosecutors found financial data on Avenatti’s seized law firm servers, but the Ninth Circuit Court of Appeals rejected Avenatti’s bid to get the case dismissed, and he pleaded guilty in June to four wire fraud counts and a felony tax charge after he said plea negotiations over his 36-count indictment had failed. Frank attended the hearing.

Prosecutors say they’ll dismiss his other six wire fraud counts, but their dismissal of his remaining tax and bankruptcy charges depends on Selna imposing a sentence they believe appropriately addresses the scope of Avenatti’s crimes, which could be about 10 years.

Sentencing is scheduled for Oct. 31 in Santa Ana, with briefs due Oct. 12.