The group Courage is a Habit is making waves. Alvin Lui, founder of the movement to educate parents on the threats to children from woke cultists, bought a ticket to the American School Counselor Association conference this year and recorded the whole thing. And it’s a good thing he did.

What he uncovered is a boiling cauldron of dangerous ideologies that are causing racial division and hatred, a gender crisis, anxiety disorders, increased suicidality, and an unbelievable admission that school counselors have taken children to get birth control against the wishes of their parents.

This clip of the retiring president of ASCA, Dr. Carolyn Stone, shows her telling the crowd of school counselors, who parents think are employed to help kids get into college, a story about an ethical dilemma that will terrify you. “I get that a lot,” she said about school counselors saying her talks on ethics worry them. Stone relayed a story where a new school counselor approached her with a shocking confession.

“She explained that she had just taken a child to get contraceptives at a clinic because her mother wouldn’t let her have them. She said, ‘what do I do?’” Then Stone asked the crowd of school counselors to tell her what to do in that situation. “Solve this for me. Do you, one, do you tell her to go back and convince the student to tell her parent, or do you tell her, two, call the girl’s mother and confess, or do you tell her, three, ‘hold your breath and pray’? Turn to your neighbor and tell them what you’re going to tell her.”

The entire crowd of school counselors shouted out, “Three!” Dr. Stone approvingly replied, “See? You’re all ready to be a part of the ethics committee! Sign up!”

PJ Media reached out to Dr. Stone, who repeatedly denied that school counselors actually do this.

“Part of the context was, it was supposed to be taking a look at the journey of twenty years and I picked out the most absurd, unbelievable, can’t really wrap our heads around an ethical dilemma that came up. It was about the absolute outlandishness of it, not about anything that is something we actually do,” she said. “This was a brand new counselor and she hadn’t been advised. And that’s why we have these conferences… we don’t want counselors doing something this outlandish. You never help a child out with anything to do with reproduction, abortion counseling, contraceptives, none of that.”

PJ Media watched the entire speech by Stone to get the context and found that at no time did she announce that the story was “absurd” or “outrageous” in any way. She also did not correct the crowd after they said they would choose the option to “hold your breath and pray” parents don’t find out about the trip for contraceptives. Instead, Stone simply moved on to the topic of equity. Her full remarks can be seen in the video linked at the bottom of this article.

“How that was misinterpreted, I never could have guessed,” she told PJ Media. “We don’t do it in the first place! It was just a tongue-in-cheek that followed. There is no way that school counselors should put a child in their car in the first place… everyone in that room can identify that it’s so absurd. I was talking to an audience that understood the context,” she insisted.

When PJ Media pressed Stone to tell us about the school counselor who told her this story and asked her to describe what advice she gave her, Stone dodged the question. “This was somebody who had said to me following a presentation I did and, you know, you just —the deer-in-the-headlights brand new school counselor—this is why we have these conferences. This is why we put this in our writing. If you want to know our stance on this, it’s all through our writing that we don’t help kids with reproduction. This is just beyond the neutral box. We have a neutral box around us, and with all the workshops we’ve done on this kind of thing, it’s all about parental rights. Parents should be the guiding voice in their children’s lives.”

But in a 2017 newsletter to school counselors, Stone wrote, ” It is acceptable behavior for school counselors in certain schools and communities to refer pregnant students to Planned Parenthood, but in many other communities, this action would be considered a serious breach of ethics and infringing on family values and parents’ rights to be the guiding voice in their children’s lives.” Stone told PJ Media that school counselors “don’t” help students with reproduction, but in her own writing, she contradicted that claim.

Stone was asked several times to divulge what advice she gave the counselor who took a child for birth control without parental notification or consent, but she avoided answering that every time, insisting it doesn’t happen, even though her own account says it did.

When PJ Media showed Stone several news articles about school counselors taking a child for an abortion, or birth control, or keeping a student’s gender identity a secret from parents, she insisted that those incidents are “outliers” and not consistent with ASCA training.

But Lui published documents and slides from ASCA training on his website, and it tells a different story—and that story isn’t at all “neutral.” Here’s a training slide about how “White folks” are bad.

.@ASCAtweets is getting away with slipping racist, anti-white #CriticalRaceTheory into the minds of students through their counselors. This way the schools can say “it’s not in the curriculum.” This slide is from ASCA’s 2022 conference. Do you want your kids subjected to this? pic.twitter.com/JJ4LEuMCXA

Stone insisted that she wants parents to read ASCA materials, but shortly after that material was posted online, Lui received a notice from his website hosting company that ASCA had sent them a cease-and-desist order based on a copyright violation, and they removed the Google Drive link from Courage Is a Habit’s website.

Two days later, Google contacted Lui to inform him they deleted his Google doc under pressure from ASCA.

Google has been notified, according to the terms of the Digital Millennium Copyright Act (DMCA), that some of your materials allegedly infringe upon the copyrights of others. The details of the allegedly infringing materials may be found at the end of this message. …Please note that repeated violations of our Terms of Service may result in further remedial action taken against your Google account or associated accounts, including suspension or termination.

The claim that the material Lui republished was copyrighted is thin. Fair use laws demand that journalists be able to publish documents like this for informational and educational purposes. These materials are being used on students in public schools. They should therefore be in the public domain. And if the ASCA isn’t doing anything wrong, why are they trying to scrub their own training materials from the internet?

During her interview with PJ Media, Stone pleaded with people to read ASCA materials so we understand what it is they actually do. But now ASCA is frantically trying to get rid of those materials so you can’t read them. Here are some of the worst things Lui found that ASCA doesn’t want you to see.

The conference, ironically named “No Limits,” put a heavy focus on the controversial gender theory that is leading to the mutilation of healthy kids by money-hungry surgeons. Many of these kids are left with a lifetime of suffering from botched procedures and the crippling effects of puberty blockers, like bone deterioration and stunted growth. ASCA is going full steam ahead, training counselors to affirm the cult of the gender theologists. One slide gives definitions of the gender cult’s preferred language, which is being shoved down children’s throats in schools. 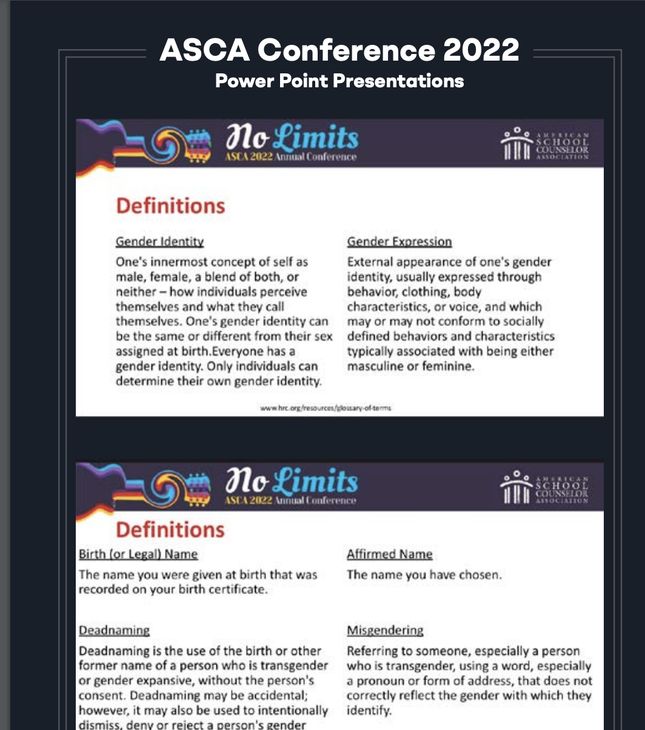 This slide below is particularly disturbing. It defines children who are uncomfortable with opposite-sex students in bathrooms or locker rooms as “bullies.” This is deeply misogynistic and a direct attack on the safety and privacy of girls. 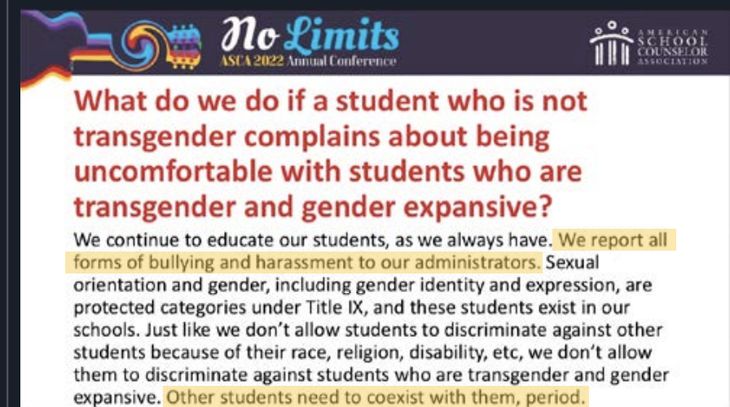 The agenda for the “No Limits” conference was full of far-left programming, including “anti-racism” (which is code for encouraging racism against whites and instituting a hierarchy based on skin color), becoming an “LGBTQ-inclusive school,” “equity in action through systemic change,” “support [for] transgender and gender-expansive students,” and more. Notice there isn’t one event here geared toward respecting the First Amendment rights of students to be free from compelled speech or assaults on their religious beliefs. That seems to be something ASCA doesn’t care about at all. 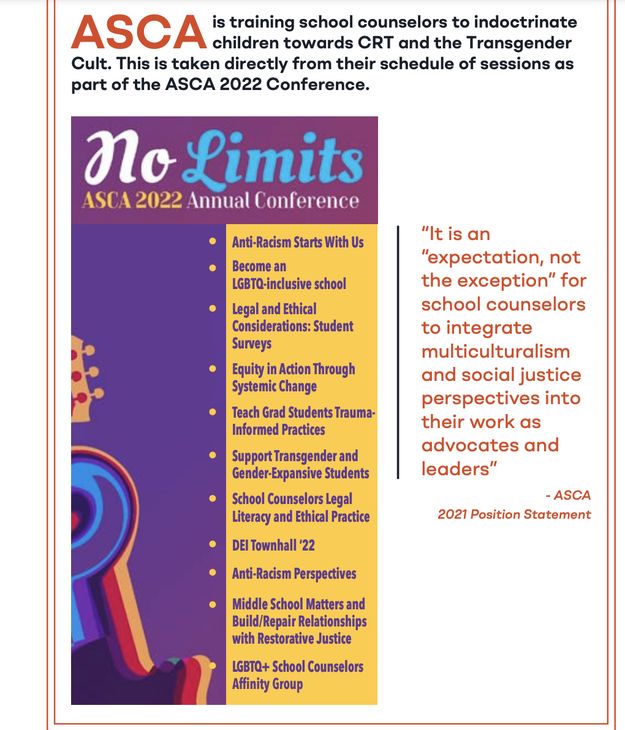 The next slide, attributed to the Human Rights Campaign, really rankles: 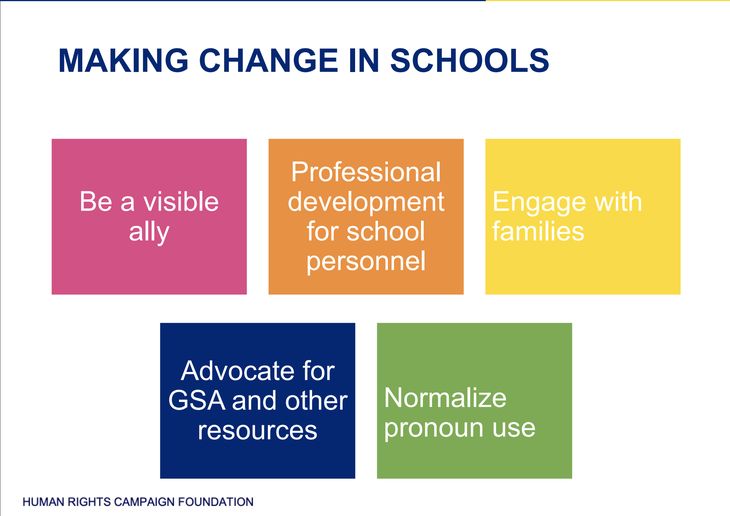 Could a counselor decide to be an ally to Catholic students by being visibly pro-Catholic with statues of Mary in her office and signs on the door that say “safe space for Catholics” and repeatedly attempt to normalize the use of rosaries? Obviously, that’s a ridiculous supposition. No one would allow that in a public school. But why do they allow the counselors to be “visible allies” to LGBTQ+ students? Why are they “normalizing pronoun use” and pushing these fringe beliefs on all students?

These are cult beliefs that only a small minority of people believe (and almost all of them are on TikTok). Most people do not believe that there is an infinite number of genders or that humans can change their sex. So why is this allowed to be treated as if it is universally accepted?

The slide below is extremely disconcerting. It claims that the way to support trans youth is for counselors to help them “[take] steps toward transition.” Dr. Stone insisted that ASCA counselors don’t do this. But their own materials belie that claim. What’s shocking about this slide is how school counselors are being encouraged to advocate for medical procedures like puberty blockers, hormone therapies, and surgery. None of these people went to medical school. Should they be telling minors that these medical interventions are safe and even good for them? It’s absurd, and the liability should be high enough that their lawyers tell them to stop. Anyone who does this to someone else’s child should be sued into bankruptcy. 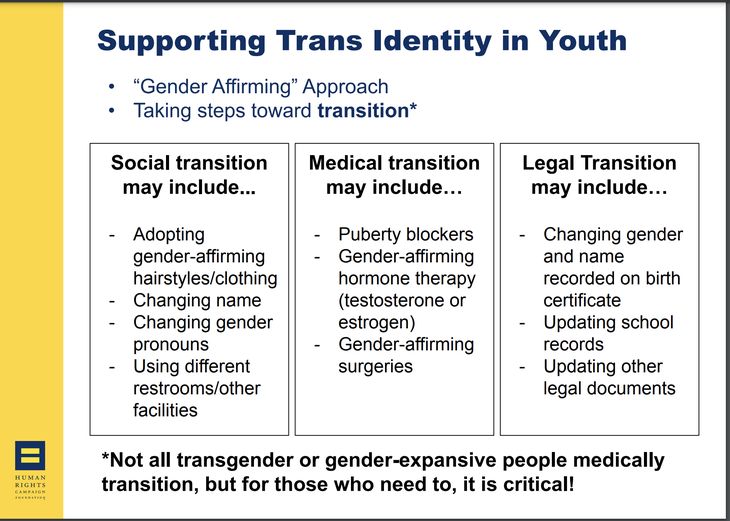 Speaking of lawsuits, ASCA provides its members with up to $2 million in legal assistance. They provide protection for their counselors who do these things! Luckily, there are organizations out there willing to assist parents in filing lawsuits against groomers who would seek to sever the constitutional right to be a parent and direct their child’s education.

Despite Stone’s repeated insistence that ASCA is not indoctrinating children, the evidence from their own materials is clear. They are doing it, they know you don’t like it, they are trying to hide it, and they’ll lie to your face if confronted about it.

Don’t forget to sign up t be a VIP member if you haven’t already. My podcast this week is on this topic, and you can hear parts of the explosive phone call between Dr. Stone and me. It’s illuminating.

Also, check out the live stream I did on this topic with Alvin Lui below. In it, I play the unedited remarks from Dr. Stone so you can hear the context for yourself. Perhaps the most telling part is the woman who introduces Stone, who says Stone “encouraged us all to learn the rules, so we know how to break them properly.”

The Real Problem With Jon Stewart

Gaslighting Americans at the Gas Pump

The Enemy Is at the Gates: It's Time to Stand Up

Don't Get Cocky, We Haven't Won Yet