The transhumanist, transgender agenda is being pushed on the American people as a predator class institutes its agenda designed to eradicate gender and invert nature and reality.

“Nonbinary” athletes are now permitted to compete in next year’s Boston Marathon without registering as members of the men’s or women’s division.

The Boston Athletic Association, the race’s organizer, announced this week that it would allow nonbinary athletes to compete next year without having to register in the men’s or women’s division.

Organizers confirmed the new policy change when registration opened Monday for the 30,000 competitors expected to contend in its next April 17, 2023 race.  The transgender policy stipulation applies not only to the Boston Marathon but other BAA races, including a 5k, a 10k and a half marathon.

TRENDING: Martha’s Vineyard Homeless Shelter Coordinator Melts Down Over Illegals Flown to Island: “They Have to Move From Here to Somewhere Else” (VIDEO)

“Discussions are ongoing with nonbinary athletes in an effort to further promote inclusion at all BAA events,” the organization said, adding, “We view this first year as an opportunity to learn and grow together.”

The athletic association will now use existing qualifying times for women as the standard for the nonbinary field.

@JacobsonOnAir Boston marathon – so if I know I can’t win men’s division but top 10, i can claim non binary and probably win that division and make history as 1st ever? #scam #BostonMarathon

Gender-fluid activists and runners are lauding the new move. 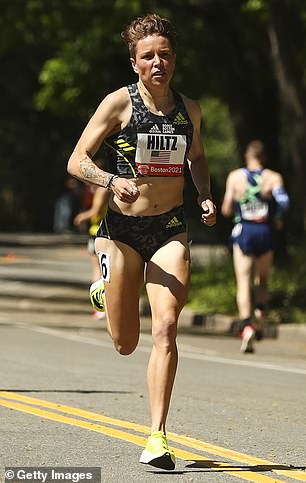 ‘There’s still so much work to be done but I’m thrilled that nonbinary runners are being acknowledged by the Boston Marathon and BAA,’ transgender Hiltz pro miler tweeted.

“The Boston Marathon is the pinnacle of marathons,” Calamia, the winner of the nonbinary division of this year’s San Francisco Marathon, told NYT. “So to be heard by them is a sublime shift in the running community for trans and nonbinary athletes.”

Calamia, who identifies as trans and nonbinary and uses he and they pronouns, is a teacher at Gateway Public Schools, a San Francisco-based public charter school organization. 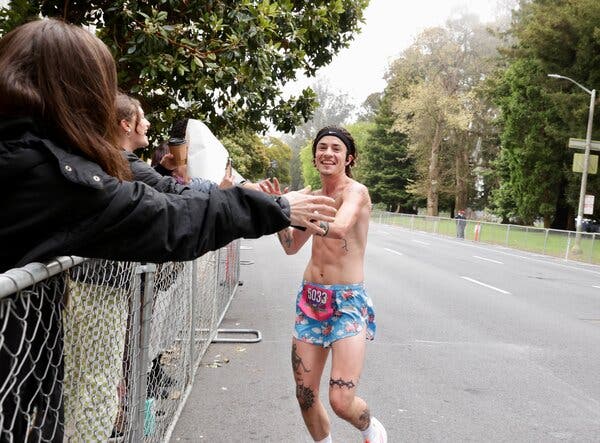 Cal Calamia won the nonbinary category of the Bay to Breakers race in San Francisco in May.

“Our teachers make waves in and out of the classroom!” Gateway Schools tweeted. Mr. Calamia’s advocacy “is helping make the Boston Marathon more inclusive for trans and nonbinary athletes!”

Our teachers make waves in and out of the classroom! Check out this great story in the NYT that details how Mr. Calamia’s advocacy — and incredible athleticism — is helping make the Boston Marathon more inclusive for trans and nonbinary athletes! https://t.co/vohMprEBr2

“I was running races and coming up against a registration platform that aske me to identify as a man or woman,” Federowski told the NYT. “I finally put my foot down and said: ‘You know what, I’m not going to give my money to races that don’t affirm or celebrate my identity. If there’s a race I want to run, I’m going to reach out to the race director.”

“There’s prize money, awards, division awards, regulations, the list goes on and on,” he said. “So I try to emphasize that it’s a critical step, and it’s very important, but that it’s a step.”

Federowski created, “The Guide To Non-Binary Inclusion In Running,”  a collection of resources for race organizers. To date, 228 races in the United States and 20 internationally have nonbinary divisions, according to a database included in the guide.

“The Boston and London Marathons are also part of the World Marathon Majors, a collection of the six largest marathons in the world. They join the New York City Marathon, which added a nonbinary division in 2021, and the Chicago Marathon, which will feature a nonbinary category for the first time this year. The other race in the series, the Tokyo Marathon, has not announced a nonbinary field, according to the spokesperson,” NYT reports.

Corrupt Obama Judge Christopher Cooper Doesn’t Recuse Himself Then Gives Dr. Simone Gold Harsh Sentence After She Turned Him Down for Date in College